Look at this beautiful cat with soft blue fur and wise eyes and copper-colored, many will say that in front of them — a real Brit. Yes, the British really like it, however, it still is not. Carthusian cat, or as it is called, the cat “Chartreuse” is a real French woman.

Despite his aristocratic appearance, the cat “Chartreuse” is not an aristocrat. At least, this is the story of its origin. Officially the country these furry kotofei is considered to be France, where they were presumably imported from Persia in medieval times, but the roots will be said later. Carthusian cats lived in that period of time in monasteries and were loved and adored by French monks, unfortunately, not for their beauty and docile nature.

Chartreuse in those days, you could say, grossly exploited people. First, these Pets are not sat on embroidered cushions, and performed in the monasteries of their direct duties — it is the destruction of mice and rats. But worse of all, they were bred also in order to have them with tasty meat and good skins. Such mistreatment of these lovely, wise, full of love for people cats lasted from the 14th to early 19th century, that is almost 5 centuries.

Now a little about the roots of these tailed beasts. The fact that the origin of cats “Chartreuse” is very uncertain, and to date, the breeders there are several major versions:

Thus, Cartesian cats lived in France and freely bred until they came to the First world war. Unfortunately, the fighting of those years has almost completely destroyed the number of these animals, and in subsequent years, scientists and breeders had to work hard in order to revive this breed. The basis they took the historical sources describing the Chartreuse, their appearance and nature, after which followed a rigorous selection.

To derive the desired breed, the scientists took cats purebred, without any impurities, that is those on vse100% met the standards. They looked everywhere, even took to the streets and monasteries. Eventually managed to get the desired result, and in 1928 the breed was presented at the exhibition of cats. In 1934 was passed and the basic standard of the breed.

Then came the Second world war, and again the blue French cat appeared on the verge of extinction. At that period left only a few individuals who were held solely breeders. Later, in the 70-ies, cats of this breed are exported to the territory of the United States, where their breeding was done by the local breeders. Today it is in North America you can find the purebred of this breed.

And yet, more common name these Pets — it is the Carthusian cat. So, and not otherwise, have named their Pets the famous French statesman, General, President of France Charles De Gaulle, whose name was ward Grible, as well as the famous French writer Sidonie-Gabrielle Colette. These well-known personalities were very fond of their Cartesians for their boundless devotion and love.Also about this wonderful cat has a mention in the arts, Dating back to 1747, when the French artist Jean Baptiste Apron depicted Carthusian cat on his picture (it was a portrait of a noblewoman, holding your pet on hand).

As mentioned earlier, Chartreuse could be mistaken for British. But experienced breeders and just big fans of cats can always be distinguished one from another by their appearance and character.

On the exterior of Chartreuse

Despite the thick blue coat and round face, like the British, Chartreuse all have their own features:

Important clarification! Cat the Chartreux is not only blue coat but blue fingertips!

If the color of the pads is different a different shade, it is likely that the animal is not purebred.

Another important clarification: owners should not scare you, if they are purebred Pets will bring the kittens with the so-called tabby markings, which is a barely visible stripes on the fur. Such a moment is also normal, and as they get older the kids will start to get an even solid color.

On the nature of the 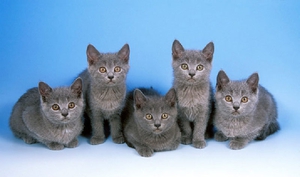 Cat breeders Chartreux and lovers of this breed say about the nature of these Pets is very diverse, but all of their opinions have one thing in common: these Pets are loyal and very, very jealous. They are very attached to their owners and felt a rivalry with other Pets. Another General opinion is a Chartreuse, not a bully.

These French beauties endure the change, adapt easily to the new place of residence, so that problems with the move or just change recreation areas will not arise.

Another distinctive feature of this breed is silent. Yes, this yellow-eyed Frenchman will not exasperate their children their gift of gab or a love Serenade. Rarely you can hear from them quiet and thin “meow”, but to / meow they love. They purr loudly, especially when they are in good spirits.

Despite their strong attachment to the owner, Chartreuse will never feel alone in the hours of absence of the person. Most importantly, leave for a few cat toys to have something to do. And still: representatives of this breed is always determined his place in the house and will not allow to be occupied, even if it is loved and adored with all my heart the owner. French purring will fight for their spot and certainly will win this fight.

The warm Chartreuse coat will feel comfortable, even if the severe winter. Even if in the harsh winter he will want to walk in the fresh air.

The health of Chartreuse

The French Chartreux is a selective breed, so she has some disease, for example, because of a strong and massive physique, these animals can have joint problems. If the silent kid I got to cast a vote, similar to the cry, and hide in dark corners, it means that he has something hurts, and it is best to take the pet to animal doctor.

Also owners are advised to show your pet the dentist, as the cutters a Chartreuse are often small and closely spaced incisors. To continue with them had no problems, it is best to remove them immediately. And in General, the mouth that French is quite vulnerable, so for her hygiene also need to be monitored. The same goes for cleaning ears and eyes.

The Chartreuse, love to eat, and this can lead to obesity, which in turn leads to problems with heart and blood vessels. So to feed the little Frenchman needed correct, as will be discussed below.

How to feed Chartreuse 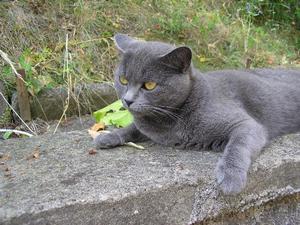 Great attention should be paid to the basics of good nutrition cats of this breed, as it plays a significant role in animal health.

Allowed to eat dairy products, beef, poultry and even eggs. Of feed you should choose only those that are marked “premium class”.

Will not prevent the Chartreuse food for cleansing of the esophagus from wool and also germinated a special grass for cats.

How to care for Chartreuse

Pet sometimes you will need to bathe, but it is necessary to understand that their thick coat will not instantly get wet, and when wet, will dry much longer than regular cats.

Chartreuse is necessary to periodically comb out with a slicker: 2 times a week is the minimum that you need to perform. During the shedding season (twice a year) an animal need to scratch daily.

Because French blue is not an aristocrat, and the “commoner”, it is required to walk in the fresh air. Representatives of this breed love to be outside at home, this practice will be a good prevention of excess weight. It is important not to let the cat is under the open sun, otherwise its beautiful fur can darken.

The house is a Chartreuse, I do not tolerate closed doors and will persistently try to open each of them.

Don’t bother with buying a bed for a family member, after all, the French yellow-eyed handsome man will find himself a suitable place where it will rest daily.

One Comment on “Carthusian cat, or a cat “Chartreuse”: all about the breed”