Cat breed Ragdoll has a surprising ability to muscle relaxation. If the seat of a furry pet on your knees, you can feel it spread in his hands, taking a comfortable position. English “Ragdoll” translates as “rag doll”. Such a cat can live comfortably, as the breed does not require special care. Her character is balanced. And therefore it is possible to have a breed, if there’s a family and other Pets.

There are several legends about the origin of the cat breed Ragdoll. One of the legends tells about the Angora cat named Josephine and her owner Anna Baker living in the UK. During one trip, the accident happened, and the cat, Josephine received numerous injuries. After a long rehabilitation, the animal finally fell on the foot. But after the trauma Josephine changed her character has become soft, flexible, and willfulness, and aggressiveness are gone. The pain threshold was decreased, which helped the animal to recover faster.

Mistress Anna Baker was pleased with the changes in the nature of cats. And as an experiment decided to mix a cat with a pedigree Burmese cat. This breed is characterized by a gentle and calm personality. In the end, there was the offspring a new breed. The kittens have inherited the character of the Pope, and the ability to easily relax the muscles – mom.

Description of the breed Ragdoll

Sometimes these cats are called Feline Buddha. And all thanks to their calm steady gaze. It seems as if those clear blue eyes looking through and understand the essence of the universe.

This breed has several distinctive features:

The color of the Ragdoll breed is of three types:

Color can vary within brown, bluish or violet shades. Other colors can not be. To choose a purebred kitten, you need to look hard, because the kids can still be white, but the shade you can see. Over time, the wool will be transformed. 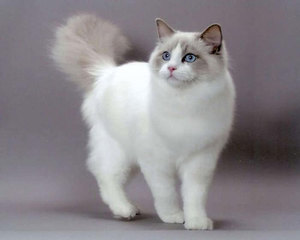 Not without reason the name of the breed means “rag doll.” The fact is that cats of this breed is really like soft toys themselves are so soft and temper them flexible, and the muscle tone allow you to take the cat any posture and form. Cats have no such traits as aggressiveness, and all thanks to a low pain threshold. They also have a fairly well developed intelligence, allowing you to train a pet.

Ragdoll cats are sociable. Can begin to fawn on me and purr when communicating with the host. Very attached to his master, and also love to play with children. When master long is not at home, they start to bored, sad and even survive. At such times, they do not want to do, except sit and wait. As for living conditions, these cats have no special requirements, they adapt to any conditions. Cats feel good, when the host side. You can safely make and other animals, these cats are friendly.

Wool cats sheds weak, and the undercoat is almost not slipping, so care is Quite simple. Cats enjoy scratching, you only need to choose the right comb with a long coat. But they do not tolerate water treatments, avoid bathing them. 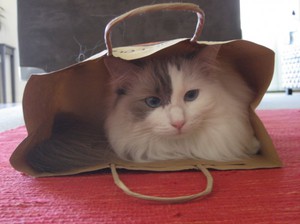 A characteristic of the breed still is not little kittens to take mom to 16 weeks, as the development is slower than other cats. They also have delayed reactions and reflexes, so don’t let him walk one, for him it could be dangerous, the pet needs care.

By the way, they have no one characteristic common to all cats is to roll in the fall. So dangerous for them falling from any height. Encouraged from childhood to raise a pet, to teach him to climb higher. Due to intelligence, cats learn well education.

Cats have good metabolism, they love to eat, and not gain unwanted weight. Kittens Ragdoll requires 120 grams of balanced food daily, while adult cats not less than 300 grams of food. Daily diet should consist of meat by 2/3.

When using any mineral supplements should be required to consult with the vet.

Ragdoll cats excellent health and strong immunity, which can be reinforced by special vaccinations against viruses and fungi to prevent.

But unfortunately, cats have a predisposition to certain inheritable diseases, immunity, whatever it was, in this case, not the defender.

A common problem these cats hip dysplasia. It is important to diagnose it because in its advanced stage the disease causes severe pain to the pet and even incapacitates him. But in the early stages the disease is completely invisible, so you should conduct routine inspections of the animal at the vet.

There is another disease that is caused by a weak heart, characteristic for this breed. An illness called “feline hypertrophic cardiomyopathy”, from this disease may die even kitten. To eliminate this disease from your pet, you need to know about the health of his parents.

How to distinguish among breed Ragdoll kittens 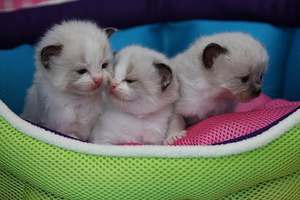 Often this breed is confused with the breed of Burma, they have many similarities. Burmese kittens are born white and over time, the wool takes on color. According to the rules of breeding cats Ragdoll pedigree kitten should contain the descendants of the cat Josephine. It is recommended to take kittens Ragdoll from experienced breeders. And be sure to pay attention to breed characteristics: blue eyes, elongated body, rounded ears, bushy tail. Ragdolls are calm and even phlegm. And for sure need to take the kid on hands, because the hands can feel the animal will immediately relax and become soft, like a rag doll.

Advantages and disadvantages of the breed

Each breed has its positive and negative traits. But it is impossible to say for sure, because these parameters are relative from the perspective of the owner of the pet. What relationships are built between the animal and the owner, for the most part, however, will depend on the owner. It is said: “we are responsible for those who tamed”.

So, we can distinguish the following advantages and benefits:

And disadvantages of the breed:

3 Comments on “Cat Ragdoll. The breed characteristics and how to distinguish a kitten”