The Savannah cat breed is one of the most expensive breeds of Pets. Its name this breed has received from the nicknames kitten born in 1986 from a mating of a Serval with an ordinary cat. The high cost of the Savannah is due not only to its excellent physiological data and beauty and rarity. Now all over the world you can find only about a thousand animals belonging to this breed.

Back in the eighties breeders had the idea to create a small home leopard. Then, of course, there was already a Bengal cat that has large resemblance with this wild animal. But one of the color breeders were few, they wanted to breed with the genes of a leopard, with the spirit of Africa, able to live with people in houses and apartments.

For this breed, the breeders decided to breed a domestic cat and a wild African Serval cat. In the end they turned out — the light appeared first kitten, with striking appearance, but it is homely and affectionate as a regular cat.

In addition to color, breed Savannah had inherited from servals some physical features such as long, strong legs, ability to jump up to three meters in height and large ears with tufts like a lynx, able to hear everything happening at large distances. Like servals, Savannah loves to swim and take a bath. It feels great in the water, able to swim quickly for long distances and even to fish like wild ancestors. Also, Savannah got the hunting instincts of the wild African cats, so not advisable to let her go unsupervised to run around the yard, this could end badly for the yard cats and dogs.

Characteristic of the breed Savannah 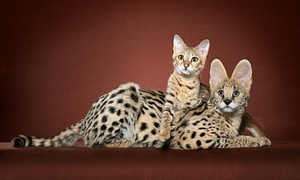 This breed is very active compared to other domestic cats. I love to run, jump and play, spend time outdoors. Therefore they need often to walk using a leash and collar, but can be released to run, not losing sight of. They better feel in the country or in a big house with a yard than in close apartments.

Savannah have a wonderful nature they are peace-loving and sociable, love people and quickly get used to them. Very attached to the owner, which is not always good, because to go anywhere without Savannah would be extremely problematic to leave with a stranger it is not in any way impossible, and with friends it will still be hard to miss the host.

To the toilet these cats can learn very easily, quite a few times to show the tray and explain what it’s for. You can also drive a cat to the toilet on the street, accustomed to endure to walk like dogs. You should know that in the house, which is home to Savannah is always a peculiar odor, since cats mark their territory. To save them from this habit, the breeders have not yet succeeded.

Unlike servals, Savannah is quite problematic relationships with other animals. If all the people they consider their friends, if not immediately, but over time, with cats and dogs, all very different. If Savannah ever since childhood, living under the same roof with other animals they will be best friends for life. But if you bring a kitten or a puppy into the house, where there is already an adult cat Savannah her reaction is impossible to predict. They can quickly make friends, unable for life to remain enemies or Savannah will attack the intruder and take his life. This is due to the wild instincts of cats Savannah. All outsiders in their understanding are dangerous.

With people and small children from the Savannah, things are much better. They love absolutely all people, regardless of age. Like domestic cats they fins out to people, purr, love to be petted and even sleep in the legs on the master bed.

The physiological characteristics of cats Savannah:

Special care Savannah is not required. It is necessary to walk several times a day, during moulting comb fur. To have her swimming at least once a month. It is not for cleaning (its clean, the cat is able to take care of myself), but to make her happy — Savannah loves the water.

These cats have very strong immune system, they rarely get sick. But the cold and drafts adversely affect animal health, they do not tolerate low temperatures as, and African congeners.

Teeth don’t require cleaning or special care. Eyes and ears should be cleaned if necessary.

Like all Pets, Savannah the necessary vaccinations, so as not to catch any infection. But the vaccine in any case should not contain dangerous viruses a cat can get seriously ill or die. 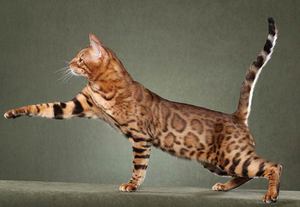 Savannah is a very active animal, so her food needs a special approach. It should be rich in vitamins and proteins. For the diet of Savannah are great raw lean meat, vegetables, fruit, offal. You can give minced chicken.

Also for feeding the suitable industrial food for cats premium. The contents of Savannah’s costing quite expensive for its owner, but with an average income of such animals do not have, it is necessary to understand long before the purchase.

For such cats you can’t buy food with a high content of cereals, digestive system of the animal a very poor job with their digestion. You also cannot give milk, sour cream and other dairy products — they cause at Savannah an upset stomach. Fish in the diet of cats is also undesirable.

Purchase and breeding of Savannah

Breeding Savannah cats is a very difficult task. With each generation they are more and more starting to resemble a normal domestic cats and are losing their wild African genes that make them special. All this primarily affects the appearance of the animal and, of course, on the price of a kitten.

Breeding females have greater value than males, as the second infertile until the fourth generation.

At the moment there are three levels of progeny bred by the breeders:

The breeders were experimenting with breeding the offspring until the F5 generation, but binding on F3 meaningless. This step requires a wild Serval, to get the full Savannah. There have also been attempts at crossing male F1 and female Serval kittens from this litter have had up to seventy-five per cent of wild genes, but these were isolated cases, the opportunity to purchase these kittens hardly ever will be.

Parents of any generation needs to spend a long life together, but this does not mean that they will procreate.

From all this we can conclude that the purchase of this animal may be only for personal pleasure. The output of the offspring, this is the concern of professionals, breeders and nurseries. 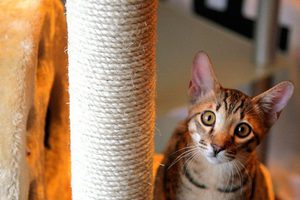 To get a kitten for such a rare breed not on the ad or pet shop. In Russia there are no kennels involved in breeding and selling Savannah.

If the desire to have such a cat is very large, you need to contact the breeders abroad. But there is not so simple. To obtain the desired’ll have to get in quite a big queue and book a cat. It is likely that to pick up the kitten will be a year or even two.

The cost of a kitten of the savanna depends on its generation number, and wild genes.

Males are much cheaper than women’s, as unsuitable for breeding. Therefore, the cost for cats is the highest.

Officially this nature is recognized only to the two thousand the first year. But some organizations still refuse to acknowledge it, because they believe that Savannah is not too stable as a breed and has no clear specific traits and characteristics that would be inherited from generation to generation.

And yet, at the moment, Savannah is one of the most desirable, expensive and unusual breeds of today. Thanks to his height and muscular figure of a cat is admired and even got into the Guinness Book of records after being called as the tallest domestic cat in the world.

These dimensions did not interfere with Savannah to be one of the most graceful and elegant animals.

Savannah is beautiful in every way, the look in her big expressive eyes. No matter how much the cat is worth, she doesn’t know, so it behaves like a normal house cat. But she feels for the owner of genuine and strong feelings of love and respect. Acquiring such animal, you will get a loyal and loving friend for many years.