Cats live next to people for a long time. Scientists give a figure of 5 thousand years. With these fluffy, tender, but wayward animals associated beliefs, legends and interesting historical facts. They became the objects of research and the heroes of incredible events.

These felines have their own unique features and characteristics. They are associated with interesting scientific facts and shrouded in mystery accident. To start we have with biology.

The most famous cats 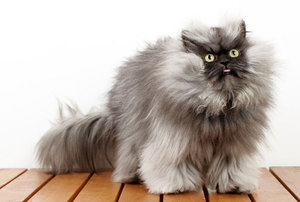 Some members of the cat family famous in history. There are numerous data about the amazing facts and incredible events associated with cats.

In England there is a long tradition of keeping cats in the residence of the Prime Minister. In 1924 the government approved an official position and its responsibilities, is to catch mice. The most famous cat named Humphrey, lived and worked in residence from 1989 to 1997.

The amazing story happened in new York in 1996. In an abandoned house was set on fire. Arriving firefighters were able to put it out and when inspecting the scene saw a cat who is very badly burned and several kittens. It turned out that the cat named Scarlett again and again into the burning house to get their babies and were able to save everyone. She was barely alive, but after a long course of treatment, recovered. And the story of the Savior spread around the world and in her honor was approved by the special award for heroism among the animals that went on the deed for the sake of people or other animals.

The crisis in Japan has affected the railroad business. The reduction of staff has led to the fact that the duties of employees transferred to local private businesses. At the Kishi station of the city Kinokawa head was the grocer from a local shop. In 2007, he handed over his duties to one of the local cats that lived at the station and received his care. The Department of communications did not object, and the cat Tama formally became head of the station, although in fact, has long performed the relevant function, meeting arriving passengers. Four-legged clerk even issued a special form and appointed a small salary.

An amazing fact about cat Hole, which is world famous for his playing the piano. Musical ability she’s demonstrated at one year of age at the animal shelter small town in new Jersey. One night the cat walked on the keyboard and since then has performed. Not only critics and musicians closely follow the work tailed musician, scientists found out that she loves Bach and often plays music alone.

A unique story of a cat Nikki, born in 2004. This is the first cat cloned from the DNA of the seventeen-year-old cat, which the owner decided to clone him after his death. The operation had cost quite a large sum of money — 50 thousand dollars. But the woman is very happy with the result. Small similar to its predecessor everything, even an unusual love of water. Of course, this case became a sensation and took place in a number of stories about cats.

Oscar the cat is famous because it is the world’s first bionic cat. In his hind legs, which are cut with a harvester, implanted implants. Thanks to not indifferent people and the ability of physicians, the operation was successful, and the cat became famous and got the opportunity to move.

In the rehabilitation center Roy island, in the US there is a cat, nicknamed deadly Oscar. In 2005, he was brought up with other kittens from a shelter to add warmth terminally ill in their last days. And after a while he noticed that the cat predicts death for patients. He sniffs and lies down on the bed of the patient, and after a few hours the person dies. If the cat was taken out of the chamber, where he chose of the patient, he had a long and plaintively mewed. Perhaps the cat feels the smell of dying cells. Doctors and scientists have continued to monitor them to check their hypotheses about this strange feeling of the animal.

About cats, many books, here are two of them:

Interesting facts about cats survived in the legends and legends of many peoples of the world. 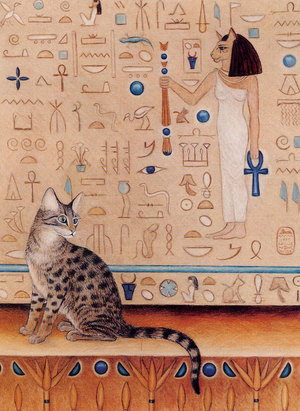 Interesting fact that in ancient Russian fairy tales cats is a big place. in some tales they are positive characters, and others not at all.

For example, the cat Bayun was a storyteller passed on knowledge, the cat scientists that goes on a chain around the work of A. S. Pushkin has similar features. Because sitting on the Tree of Life — the oak and the ways, that is the Golden chain goes so sentences.

There are stories and images of cats serving dark forces. Baba Yaga was always a black cat

To our days have preserved the tradition to let the first house cat, where she will lie there and sleep well. in the old days believed that the animal is able to recognize the place favorable for people and bad.