The Kurilian Bobtail is a cat breed, the main feature of which is a fluffy short tail. In fact, she has a number of remarkable advantages. Good character makes these creatures ideal for keeping in the home. The owners are also excited about the incredible intelligence and devotion Kurilian Bobtail. Cats, in addition, have a surprisingly deep, clear eyes. 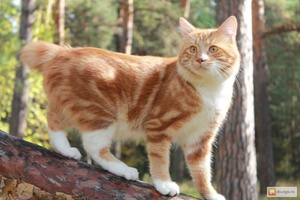 The name of the cats it is clear that their homeland – the Kuril Islands. Breed half wild and perfectly adapted for survival in the wild. Men she attracted because of the great instinct of the hunter. Cats lived on the Islands over two hundred years, and in Russia they brought only in the mid-twentieth century. After some time the breed became very popular in the West, where cats were praised for their good, light character.

The most popular breed began in the late 1980s, when scientists took a few cats and more closely examined the characteristics of their behavior. Initially it was thought that the breed can be dangerous due to the fact that individuals live in the wild. Imagine the surprise of researchers, when the cats not showing any signs of fear, approached the people and started making out.

The Kurilian Bobtail is a relatively new breed and therefore its description has not yet finished, and there are often disputes about the standard. All the complexity is that the breed was created by nature itself, and to repeat her experiments selectors can’t.

In General, the breed standard cites this description of cats:

The tail of the Kurilian Bobtail is one of the main features of this breed and as such deserves a separate description. A General description is as follows: length is about 1.5 to 8 cm in Shorthair and semi to 13 cm Tail contains at least 2 vertebrae, with a maximum of 10. Mobility – any. At the tip of the tail – wool pompom.

There are several types of tails:

A description of the nature and peculiarities of behavior 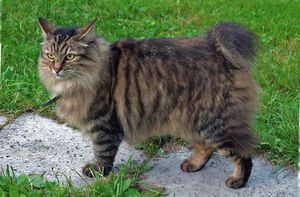 Amazing devotion to his master peculiar to these cats. Bobtail choose one person from a family with strong bonds and become attached to it. Because of this they are often compared to dogs. To the rest of the family members are also friendly. Attitude towards children is quite tolerant, will not allow himself to lift the baby paw, whatever he did. Pet likes to spend a lot of time with the owner both at home and in nature. The Kurilian Bobtail can safely take with you on a walk or on a long journey – attachment to the owner will not allow the cat to escape. 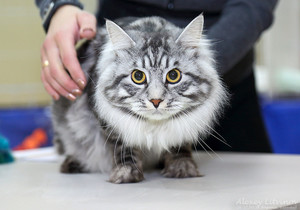 Pet needs attention and communicate with the host. Loves affection, for example, when his Pat on the belly or scratched behind the ears. Not would object to having to sleep with the owner or just lie down on his lap. More delicate are the maleswho are also excellent fathers to the care of offspring paid no less time than females.

However, in terms of attention to yourself is not a very demanding cat. Bobtail is able to adapt to the mood of the owner and, if necessary, he can find entertainment. For example, to play with other animals in the family or chase the fly. Pet is quite active, so practically, it will be worn around the apartment just so. Also loves to climb on the furniture. Therefore fragile items like vases or various Souvenirs it is better to remove or hide. 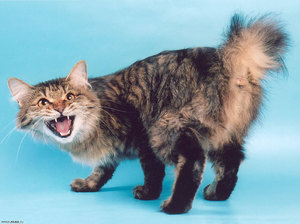 But does not like strangers. The cat is sociable, but he has all the necessary qualities for a guard too. However, to replace a watchdog, he certainly can not, but will guard the house of the owner. Will not tolerate a hostile attitude to other family members and if anything will rise to their defense.

Kurilian Bobtail adapts well to new living conditions. Could easily live at home and on the street. Hunting instincts make themselves felt. If the door to the house opened, the Kurilian Bobtail will often go out and often come back with prey in her teeth. Therefore, if home Kurilian Bobtail, mice, hamsters, fish and other similar animals, you cannot start it, otherwise they face a very sad fate. 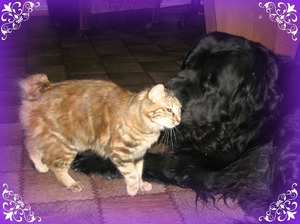 But against lives in the same apartment with the dog has nothing against it. If a dog owner permits it, the Kurilian Bobtail is a dominant position in relation to the dog. If not, then stay with her. The third option is excluded. The nature of the solid cat, so to obey even very large dog will not.

Domesticated animals are afraid of water because they do not perceive it as a natural habitat. As for Kurilian Bobtail, they also belong to this element with caution. However, their distant relatives were not only excellent hunters, but also swimmers. In the DNA at the Kuril Bobtail is, by this disposition, therefore if you start to teach a child pet to the water, in the end, fear it will forever leave, and subsequently to water procedures will be treated with pleasure. 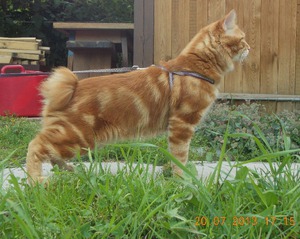 Despite the Kurilian bobtails love to caress and attention, a sissy he is still not called. By nature he is pretty solid and fearless. Different loud noises, for example, the hum of a vacuum cleaner, it does not scare me. Not even afraid of dogs. Also tend to dominate, so from the beginning you need to show him who is the true owner, otherwise then it can be hard.

Not devoid of a Kurilian Bobtail and curiosity. He heard a new sound, he immediately ran to him to find out what it is. Easy to remember melody door bell and then every time to greet the guests.

The Kurilian Bobtail is surprisingly intelligent animal. Very quickly understand what to do and what not. The owner does not have to repeatedly say that, for example, the sofa ripped off is impossible, Bobtail understand everything the first time. In addition, the cat can even be taught simple commands. Especially understands the command “fetch”. If you throw, for example, a rubber ball, the cat will follow, caught in the teeth and bring the owner. Here only it turns out it’s not always, everything here depends on the willingness of corelca. 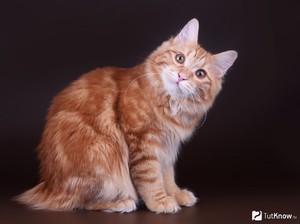 The Kurilian Bobtail is well able to take care of myself. He almost doesn’t shed, the coat does not tangle, does not form tangles. Health in General is excellent. Due to underdeveloped undercoat coat almost falls. Even the long-haired molt individuals do not suffer. The owner need only a couple of times a week to comb pet a dedicated brush.

The ancestors of the Kurilian Bobtail was excellent divers. Modern individuals have to accustom to the water. However in water treatments they did not need. Wool does not smell, so the need for frequent bathing eliminates itself. On the contrary – often to bathe the Kuril impossible. Despite the fact that the pet loves the water (after you get used to it), frequent bathing thins the hair, ruining its quality and dries the skin. 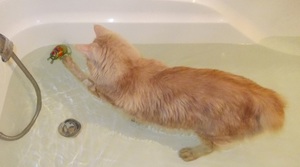 From time to time to Bobtail, you need to trim nails and clean ears. The hair on the ears cut off below the ears is not polluted. Clean them with a cotton stick soaked in a special solution.

To clean the eye using a moistened eye drops for Pets cotton ball, tissue or handkerchief. If the eye got something, it was washed with warm boiled water. Pet’s teeth should be cleaned at least once a week. First, for this purpose you can use just a rag, and after getting used to the kitten, this procedure uses a special brush with the paste. Once a year should visit the vet-dentist. 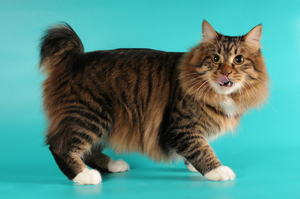 Feed the Kuril need of a meal, which was mined by his ancestors on the hunt. These cats eat everything – meat, poultry, fish, vegetables. The food you need to boil. But what to feed them is not necessary, so it’s dairy products. In addition, not in one meal to mix natural products and industrial – it is fraught with some problems with digestion. If the cat is still fed artificial food, then the feed should be of high quality.

The advantages of the breed:

The Kurilian Bobtail has a number of advantages, and next to some of the shortcomings.

Cons of the breed:

All owners of Kurilian Bobtail say that this breed is able to conquer the heart of man. If in the house there was a kitten with a fluffy short tail, and a fascinating look clean, clear eyes – the owner provided joy for many years!