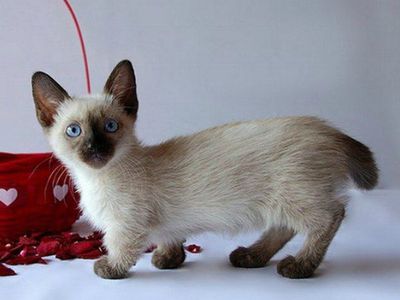 Pet that survives equally well in the apartment and in their yards, is a cat. Fluffy meowing predators won the love of the majority of people who in turn are constantly trying to create even more lovely breed. Relatively young, but already very popular on the Internet the cat is korotkolapye representative of breed Munchkin. 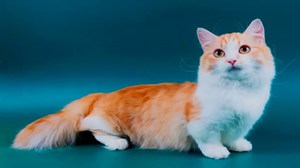 Officially breed of cat with short legs was recognized at the TICA show in new York in the spring of 1991, although it appeared much earlier. The progenitor species is considered to be korotkolapye cat Ezhevichka that pity has sheltered a resident of the United States. Woman accidentally found semi-wild animal under the abandoned wagon and decided that short leg is the consequence of the lack of nutrition of a cat. 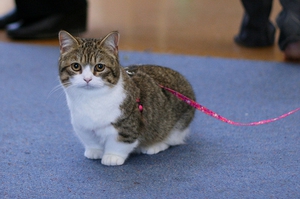 In fact, korotkolapye was the original natural mutation of the animalthat became clear when Ezhevichka gave birth to offspring from a perfectly ordinary cat. All kittens from the litter was cat-taxi. One of the children of the first a cat with short legs was a kitten Toulouse, which also ranked among the ancestors of the breed.

Interestingly, the name Munchkin cats received thanks to the well-known fairy tale “the Wizard of Oz”. It told about a small unusual people, which in the Russian translation of a work known as the Munchkins. 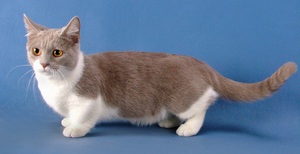 To date, the exact breed standards are not complete but the basic signs cats Munchkin added to the official description.

The head of the animal must have an average, proportional to the body size, and its form is wedge-shaped with smooth contours. Muzzle korotkolapye cat with slightly raised cheekbones. The nose is medium and smooth, but slight deflections are not considered married. The chin is broad, without ridges, and the forehead is flat, gently rolling into the line of the nose. 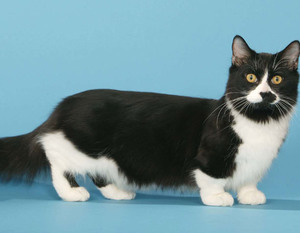 Cats are quite large, set high and wide eyes. Their shape can be rounded or almond-shaped, and the color of any thing to shade was juicy and smooth. The neck of the animal is thick, well-developed ears with the large pubescence at the tips and rounded ends.

The body of this cat breed Munchkin plainstring type, average, slightly elongated. Well developed muscles, the backbone of the average. The weight of an adult male can reach up to 4 kg, and cats – not more than 3.5 kg. the Tail is fluffy when walking is always in a vertical position and a proportional body. 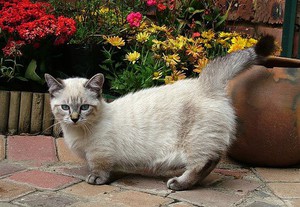 The main distinguishing feature of the breed are the clutches:

The coat of the Munchkins can be a variety of colors and lengths. Long-haired representatives should have a thick dense coat, with notably high elongation at the bottom. These cats have Boyarsky collar and raised tail, resembling a feather. Shorthair breed is always plush to the touch and have a medium undercoat.

Interestingly, fold and meet representatives of the Munchkins, but officially they have no relationship to the breed. Cats were developed by a group of enthusiasts and today has received the status experimental breed Volmax.

The nature of the Munchkins 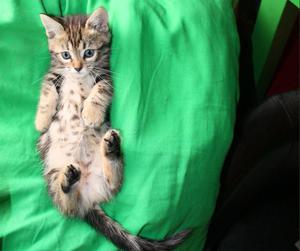 Umilitelny seals is evident not only in their appearance, but in demeanor. Their short legs do not allow animals to climb hills and jump in principle that excludes the possibility of mischief in the form of stealing food, or broken vase. Munchkin is very active and playful only on the lower tiers of the home. To independently hunt animals cannot due to the same short legs, therefore, forced to depend on the man.

Most breed members live in apartments, and their owners make fun of your favorite short-legged posture – sitting on hind legs with support on the tail and lowered along the body front paws. 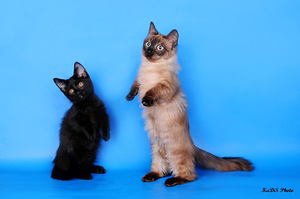 In this position, “kangaroo” seen absolutely all representatives of the breed, especially while begging for treats.

Leprosy such korotkolapye fuzzies is kidnapping small things then the animals hide in secluded places. Because of this, owners of the breed should be better to hide valuables.

In General, the nature of tixocortol friendly and affectionate. Cats are very inquisitive and moderately agile to respond well to strangers and not suffer from neurotic diseases. Animals are very smart and loving, so will fit perfectly into a family with children. Lonely Munchkin breeders will give joy and will alleviate any boredom. 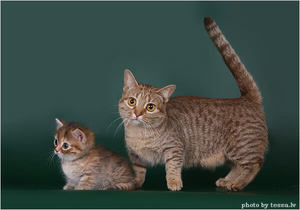 Because of the main features of cats – short legs – all of its members , very often suffer from lordosis. This disease is expressed in the weakness of the back muscles that support the spine. The consequences of the illness is not only an external manifestation of the deflection of the back of the animal, but also a significant pressure of the spine to the internal organs.

Many believe the frequent lordosis genetic disease Munchkins, but in reality it suffers a large number of representatives of other breeds.

Cats-fees on average no more than 15 years, like other felines. Of course, among rocks occur and are long-lived, managed to survive the second decade.

The conditions of detention 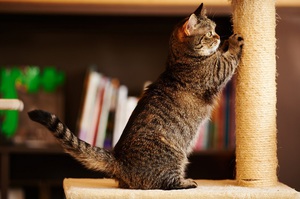 A very important trait of the Munchkins is cleanliness. It manifests not only in the regular licking their own fur coats, but in excessive “clean-up” after using the toilet. That is why tixocortol acceptable will be closed trays or trays with high sides.

Scratching posts for the obligatory furries, even though they are not considered hunters. Natural need to sharpen their greatest weapon pet should be without prejudice to the owner. To attract the animal to the device, you can grate it with “Catnip”.

As to hide found items common to all representatives of the breed, the owners better to worry about their safety in advance and not to leave valuables in reach of a cat. 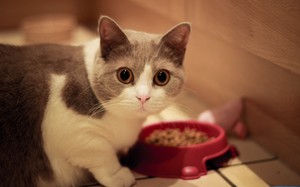 Besides him, it is imperative to ensure needs:

For the balanced nutrition of cats it is best to choose a ready feed from manufacturers. 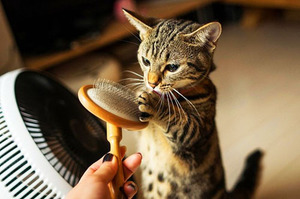 Care of the pet’s coat involves regular grooming. Its frequency depends on the length of wool and speed of its stall. Shorthair Munchkin can be put in order 1 time a week and longhaired – 3-4 times. Bathing cats allowed no more than 1 time in 5 months and only when necessary. Munchkin don’t like water, as well as other members of the cat, but during the procedure, behave with restraint. The rest of the care korotkolapye cats has no singularities. 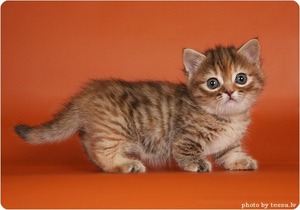 Today the breed is popular and widespread only in the homeland – the United States and in Japan. In the CIS countries to find a purebred kitten is difficult, and its cost may vary markedly depending on the quality guarantee of manufacturers between 5 and 35 thousand rubles.

Private offerings of low-cost very often are trying to sell as usual rejected Munchkin kitten, and nurseries on the territory of our country is very small. To guarantee a healthy animal should pay attention to the presence of documents, the breeders, the appearance of the pet parents, their compliance with the standards. Also important is the external data themselves kittens. Small furries need to be playful and active.