Our beloved Pets sometimes behave really strange and unpredictable. Mostly it is because they perceive our world is not the way we do. In the past these animals were considered unclean power, the mercy of mystics and companions of magical ritual. It was believed that a black cat with green eyes is a cat witch. If this cat will cross the street, then there will be trouble. Impressionable people believe that cats can see the supernatural power.

As you can see cats of our world 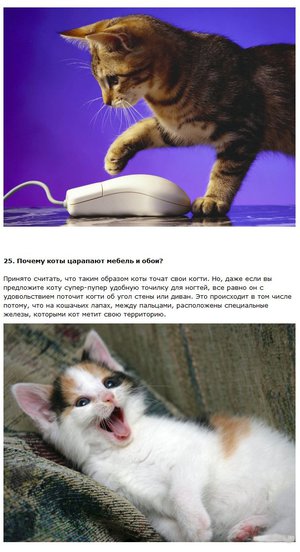 Most people from early childhood knows that cats can see perfectly in the dark. This ability of animals endowed by nature to ensure their vertical pupil. In bright light, the pupil is drawn out in a thin strip that explains how they see the cat, even looking at the sun’s glare. At dusk or almost in the dark pupil becomes more pronounced, tends to take a circular shape. It is interesting that cats, unlike other animals require a minimum amount of time for the “settings” view, a sudden change of lighting.

Pupil size is different in cats and, depending on lifestyle. For example, a circular pupil sometimes have wild cats as they hunt in the daytime. Such animals include the tiger, the lynx. As you can see cats living in a comfortable home environment allows us to understand the vertical pupil: in the daytime they can afford just to sleep.

Active lifestyle cats, their manner to defend their opinions in the fight and never give in to difficulties affected the structure of the eye. For protection against mechanical damage, it has a third eyelid. Eyes occupy most of head, have a convex shape and deep set in the skull.

Corneal cat eyes have a color from light yellow to blue. In some cases, the shade may seem as close to the green. The extra brightness and expressiveness of the cat’s eyes attached form and color upper and lower eyelids. It’s like he encircles around the eyes draws him. Despite the large size of the eyes, the representatives of the cat for the perception of the surrounding world do not rely on the mere sight. They use all the senses.

A full perception of the world

Largely night hunters rely at the hearing. They want to see a picture or subject to be interested in them. If in parallel, they do not hear any sound, even passing the mouse can be ignored. Animals are able to detect even a mixture of sounds: a very loud combined with the very quiet.

Mostly pet in the evaluation of the situation and perception of the world prefer to rely on the sense of touch. Due to the hairs, which are located above the lip (mustache), above the eyes (eyelashes), chin and even on the tail. These hairs help the furry hunters to recognize and feel that they can fully appreciate by seeing it. These hairs are called vibrissae. For cats they play a special role on the sensitivity.

A careful study of vibrissal you can determine what mood is pet:

Nature whitewash the cats ability to distinguish between certain objects and colors. If a man of such vision defect can be a serious problem and even cost lives in dangerous situations, these animals are able to use other features of view. At night many colors are lost, but what I see cats in the dark, does not change. So they manage with equal success to hunt in the daytime and at night. Indifference to certain colors helps to concentrate the mind on bright objects that provides the ability to see far at any time of the day or night and in any weather.

The vision of moving objects 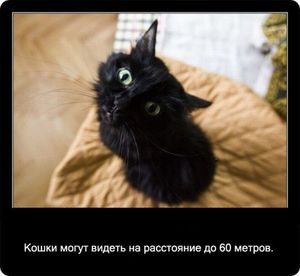 The great cat sees moving objects. For their definition it uses the eyes, ears, and vibrissae. The animal is capable in the shortest time to calculate the trajectory of an object, take a comfortable position and perform a jump to catch the target in flight. This ability of cats seems people something to play with. The cunning maneuvers of a pet trying to grab the fluffy ball, a shiny Christmas toy or simply a ribbon with a small weight, seem to be very funny.

But interest in the subject disappears as soon as it becomes stationary. This is not due to a decrease in the animal’s desire to play, and not due to the inability of cats to control their interests. The problem lies in the peculiarities of vision, which does not allow to consider the subject in close proximity. At this distance the picture before the animal looks blurry. He manages to identify the moving object only through vibrissa. They work on the movement, causing the animal to pay attention to changes in the environment. Rumor dictates the direction of movement. On the basis of this information, the animal’s brain sends the body to a certain pointwhere the moving object will be possible to consider. 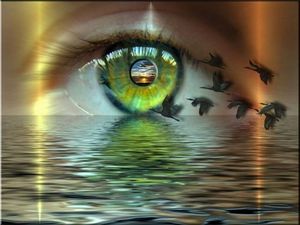 Myopia causes cats to always be in suspense, be ready for unexpected attack. Even nezha in the sun cat on a hot day can fend for themselves, only the host, because in this moment in full force working hearing and sense of smell. Characteristic sounds of the gait and unique smell allow the animal to feel safe. But any unknown component of the surrounding world causes the cat to forget about the rest and be wary to take a position convenient to attack or retreat.

Cats are excellent hunters. They are able to notice even the smallest movement of small animals or objects. They do well to find their prey even in low light. The inability to distinguish colors and myopia cats prefer to ignore it, focusing on the merits of their view. If there is no opportunity to review an item in the course are the other senses. A fallen piece of food can be found by using the sense of smell and the prowling mouse allows you to detect sensitive hearing. Vibrissae are also on motion sensors. Cats see our world better. For them, each picture is filled with volume, movement and smells.