In this article we will talk about the different breeds of cats. In the world there are more than 200 species, and officially recognized — 70.

The story of cats begins more than 11 million years ago. Domesticated cats for about 9 thousand thousand years ago. The oldest archaeological evidence found in Cyprus, and before that it was believed that the first were the ancient Egyptians. The last revered and idolized her and considered a sacred animal. Figures of cats in the house were considered a sign of prosperity and prosperity.

The popularity of cats in Europe began about 2 thousand years ago. In Rome, this animal has become a symbol of freedom and independence. Stealing a cat was regarded as a serious offense and is punishable by a considerable fine.

In the Middle ages, black cats were considered the devil’s instrument. So declared the Inquisition. So they were caught and burned alive. People were afraid of these animals , and bypassed. Since then, and there was a superstition about black cats crossing the road and bad luck.

Felinology is the study of cats, their breeding, physiological and other peculiarities of these animals.

From different information sources there are more than 250 different breeds of cats. However, officially registered only 70 of them.

World cat Federation (the largest cat organization in the world) has divided the breed into four groups:

The most popular breeds of cats with pictures and names

The following is a list by the Association of cat lovers.

A breed of cat with short hair, which was established in the 60’s by crossing the Persian and American Shorthair breeds. Exotic breed is very popular, and therefore takes the first place of honor in our list.

In the picture you can see its distinctive features:

Exotics are very kind and gentle, pay attention to this breed. 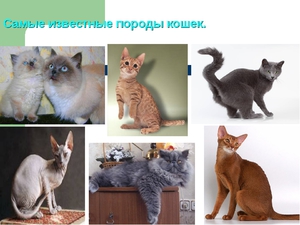 Of course, good old Persian will not remain without attention and takes the second place in our ranking. This is the most fluffy cat in the world

There was this rock in Persia (modern Iran) in the middle of the XVI century. For a long period of time, these fluffy beauties have taken a leadership position in the Association lovers.

This beauty is one of the oldest longhaired breeds. Can not exist without a comfortable home environment. Very lazy and relaxed, like lying on the couch. Calm them amazing, is not afraid of children, but require special attention.

There are about 100 varieties of Persian cats. Some of them you can see in the pictures.

This beauty looks very much like a raccoon. Hence the name — coon]. translated as a raccoon. She is very graceful and proportionate. The beauty of this breed makes the heart beat faster. Therefore, it occupies the third place in our Top.

This representative is the pride of North America, it is recognized as the biggest domestic cats in the world. There is an opinionthat it came from the love of a cat to the raccoon, therefore, have such external characteristics. However, in fact, the breed descended from the cats of the U.S. state of Maine.

For the first time was introduced not so long ago — in 1992.

The nature of Maine coons are very loving, loyal and neat.

The representative refers to semilonghair. The translation from English. as “rag doll”. These animals are very pliable and undemanding, can endure any “bullying” children, respond well to training.

The breed was developed in USA in the 60 years of the Ann Baker (breeder of Persians).

The nature of the Ragdoll kind, they are very dependent people, and without human attention can become depressed. As well as purebred cats are very touchy, so you need to control yourself and not abuse them.

Is very popular in the UK.

The Brits have a temper, active and devoted to their owner.

This is a hunting breed with an athletic build. Six of her tight and pretty thick.

Kitten of this breed is loyal and affectionate. A calm and balanced character.

This is one of the oldest breeds Shorthair. The homeland of origin — Ethiopia.

The breed is noted for:

Abyssinian representative is very active and has a playful nature. So if you like this feature of the breed, get a kitten and raise yourself up a variety of games with four-legged friend.

This “bald” a cat, whose Homeland is Canada, not everyone will have soul because of its specific appearance, however, has a fairly wide circle of admirers. Wool is missing from the result of natural mutation. The sphinxes for more than 50 years. Cat breeders around the world recognize this breed.

The sphinxes are characterized by:

Sphynx are very intelligent and loving.

At Orientala complicated nature, they are very Moody and jealous.

Definitely suggest you to watch these films whose protagonists are our favorites.