Large and long-haired Norwegian forest cat is not like a cozy home favorite. It is evidently adapted to the harsh conditions. Was officially declared a separate breed in 1977, the honor of being the first registered animal had a cat named Pans Truls. But, undoubtedly, the Norwegian cat breed is quite ancient, respected and worthy of detailed consideration. 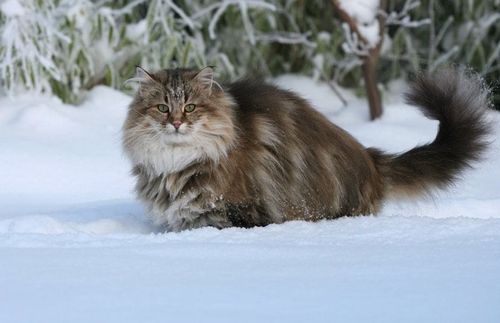 Although the breed called Norwegian, it is widespread across Northern Europe. Interestingly, in Norway it has long been simply called forest cat. There are different versions of its origin. The most popular option — the ancestors of the breed (and this Angora cats) were imported to Scandinavia in the sixteenth century on the ships, as they helped to get rid of the rats attempt on meager rations and raznositsya plague. The nature of cats living on the ship, quickly became quite hard because the conditions were not very favorable. And once in Scandinavia, on solid ground, these animals quickly ran wild.

They adapted to a fairly harsh climate, they had to provide their own food, mainly fish. And they had to climb trees. This explains why they have such a strong, tenacious and well-developed claws. Turned forest cat breed, which almost had to re-domesticate.

There is another version of the origin of the breed. She argues that these cats came to Scandinavia long before the XVI century. Supposedly the Vikings brought them on their ships from Scotland. That is not even Norwegian, and Scottish cat. And his long hair is the result of the Angora mutation. 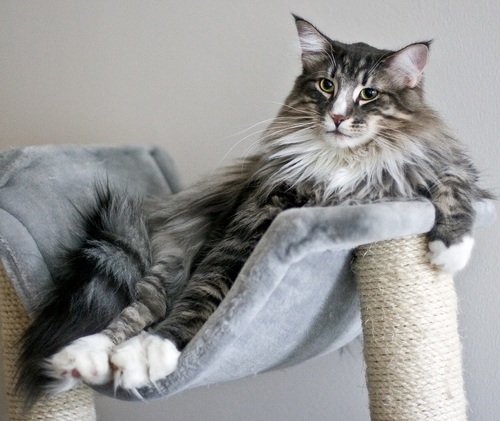 Norwegian cat breed is quite ancient

That the ancestors of the modern representatives of the breed in Scandinavia for a long time, and says that in the old days they were associated with the pagan goddess Freya. Allegedly, these cats were harnessed to her chariot. By the way, Freya was regarded as a goddess of love and fertility, but like all the other characters of Norse mythology were quite harsh. The nature of her surprisingly fit the description of the Norwegian forest beauties. Interestingly, this Scottish (and Norwegian) breed is, even at a fairly late etchings depicting the goddess Freya, so it’s quite an ancient tradition.

In these animals there was another name — scarcity, that is the wildcat. But they (or their ancestors) they even mention in the ancient chronicle “the Younger Edda”. One legend tells of how even the mighty God Thor failed to lift scocket from the ground. That is, Scandinavian folklore, these cats are known explicitly from the days when the Vikings and did not think about the conquest of Scotland.

For a long time forest cats bred with short-haired cats. So one time the breed was on the verge of extinction. But it still managed to preserve through the efforts of enthusiasts.

These animals have a relatively large size. The kittens are quite large, grow long, fully maturing in 4-5 years. The weight of an adult is 8-9 kg (females slightly less). They look a bit like a lynx, but there are some features of the Maine Coon and the Siberian breed. The Norwegian forest cat has a very thick hair, it is called triple because it is growing in multiple layers — first, thick undercoat together with the main hair, then along the ridge and on the tail long guard hair. They are needed not only for beauty, as endowed with a special water-repellent — properties. Undercoat to the touch a bit like cotton wool, it protects the animal from cold weather. This is one of the important characteristics of the breed.

Norwegian forest cat — an elegant and beautiful animal. Similarity to trot accentuate the big ears with tufts on the tips. Very beautiful fluffy tail, which is almost equal to the length of the body. The hair on the face of the animal is also very thick, the chin she’s so long that resembles a beard, which descends to the chest.

Color in these cats may be different. The breed standards are not only allowed Siamese. Sometimes a combination of two colors (e.g. black and white hair, and the undercoat is always light), less common tricolor.

These cats have almond-shaped eyes, their color may be any, the main thing — the characteristic shape and size (they have to be big). The color of the nose should match the coat colour. That is, if the cat is black, and the nose should be.

The Norwegian forest cat is not only elegant and graceful, but also very independent and freedom-loving creature. However, the nature of it is quite sociable, representatives of this breed are drawn to people. They love large families and enjoy playing with children. In addition, skultety very attached to the house. They jealously defend the boundaries of their possessions.

I wonder what a kitten of this breed Matures fairly late, not only physically, but also mentally. Individual character is formed by age five. In most cases, the temperament they have Nordic, so even in March, they remain relatively calm when compared with other members of the cat.

These creatures, despite the fact that they as a breed was formed in a rather harsh conditions, it is not inherent aggression. They can get along fine with other Pets.

Scarcity love the large open space they need to move, so even if the representatives of this breed live in apartments, they still need fresh air. In the open such cats show their playful nature, demonstrate dexterity and agility, and along with instinct, perfectly preserved from the time of their ancestors. 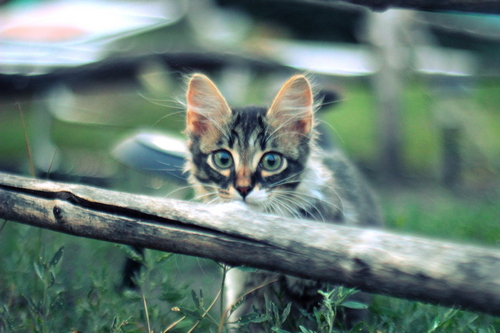 Although this breed is considered a semi-longhair, care for the coat of the animal may take the owner a lot of time. To the Norwegian forest cat kept the presentable appearance, they need regular combing.

Especially carefully it is necessary to do in the offseason, because then they rapidly fade. On the one hand, this leads to the fact that the apartment need to clean more often, and other things the owner will be immediately clear, what representative of the breed lives in the house. On the other hand, thorough combing this period, it is important for the animal, because there is a risk of felting of wool in the mats, and they will have to get in a veterinary office, and this procedure is not the most pleasant. During this period, the coat should be brushed daily using a special brush.

Bathing animals need opredelennye shampoos. May also buy other means, are the same as for any other long-haired breeds. 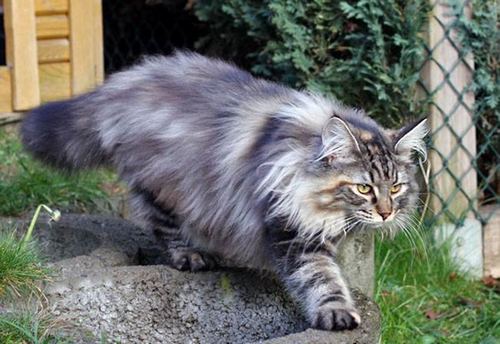 Although it is believed that the breed of Norwegian forest cats is no different with some insistence in nutrition, this does not mean that feeding is not necessary to pay special attention to. The diet should be balanced because that gives the breed a beautiful and thick coat.

Of course, the forest cats are a healthy, so often they can safely eat that will produce themselves. What did their ancestors lived in the wild. Small rodents, birds, wild herbs — these are components of the diet, which could find themselves predators. Modern scarcity too can hunt and even be happy to share with the owner its prey. But it is better not to let them eat that way. Need to find a balanced food, which would give these animals everything they need nutrients.

And it does not dry food, which probably think most owners. More precisely, the dry food that cats can eat, but in relatively small quantities and only in the case if the diet there are still some vitamins and minerals. 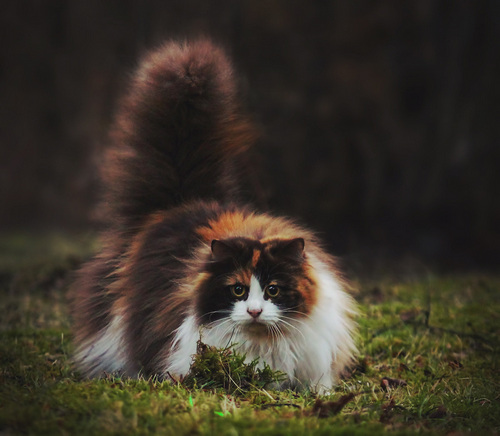 It is best to give these cats cooked meals without flavors, seasonings and combined fats. Salt is also optional. With proper formation of the diet of cats and so needs to get enough amount of salt. So what foods you need to cook your pet? First and foremost, is the meat, and will only fit lean — beef, poultry. Then don’t forget that cats need food, too. It can be oatmeal (but not cereal), and some experts suggest that and rice. But the latter can be used only if the animal has no digestive disorders. Cats can and should be vegetables. You can even boil them, but simply scalded with boiling water. As for offal, the veterinarian allow that the animal can be given, but only quality. However, neither meat nor offal of not cut into too small pieces. It is necessary to give the animal the opportunity to practice jaw.

Cats aren’t fatty meats or dairy productsbecause they are much less digestible. Some owners try to include in the diet of their Pets dairy products, but in fact it is a very controversial issue. It would seem that cats love cheese and sour cream, but then every animal is different and reaction to a dish may be different. Some animals do not learn such proteins, paradoxically. 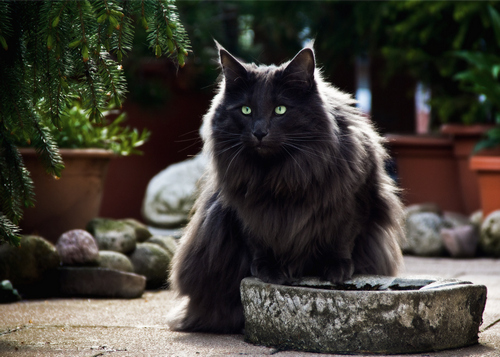 But how to provide the pet with the vitamins in the wild he would find in the grass? The easiest way to buy ready vitamin complexes (of course, after consultation with the veterinarian). You can pick up for your pet herbs that are suitable to him, and to grow them in pots on the windowsill. Some experts suggest you plant the oats. When it will sprout grass, the cat will overeat. No need to get in the way, waiting for the grass to grow or get stronger, this is completely normal.

It is important to provide your pet the correct drinking regime. Definitely need to give the purified water, and change it in the bowl at least three times a day, to keep it fresh.

The cat should stand in a bowl of fresh water, as the animal must drink no less than 3 times a day.

One of the main advantages of this breed is in good health. These cats are almost always long-lived. That is, with proper care and feeding of any problems with them should not be. Need to control the weight of the animal. And so they are massive enough, but also prone to overeating and extra pounds them completely useless.

But hypothermia and drafts, these Pets are not afraid. A strong immune system they inherited.

The only disease that can really represent a danger, it is a type 4 glycogen storage disease (a genetic disease associated with impaired glucose metabolism). No prevention from it. In some lines of the breed there is a gene, and the offspring born from its speakers, almost does not survive. But it so happens that animals with this disease survive to five months of age, then comes a strong degradation, and it still ends in death.

In rare cases there are problems with the kidneys. In this case all signs of disease are obvious, and such animals are discarded, so they have not given offspring. So kidney disease in this breed (at least hereditary) are becoming increasingly rare and eventually disappear.