Scottish fold cats come in a variety of colors. In color of the animal depends on the genes that regulate color. The main colors of the Scottish cats is black and red. One of them may have dominant or recessive. Depending on which predominates, the colour of the cat can be varied.

The colors are these colors:

These Scottish cats include:

Black cats don’t usually have spots. Can appear a few light hairs on a dark coat. Scottish purebred cat needs to be solid dark colors, no bright spots or brown areas. The coat is usually shiny and well-groomed. Dark green eyes complement the overall appearance of a Scottish cat.

This color Scottish fold cats looks very nice. Chocolate color is rare, if the animal was born that color, so his pedigree was attended by individuals of the same hue. Main thing is that the kitten was not bright spots, especially on the feet or the face. Shade is considered clean if the hair color is dark chocolate all over the body.

Traditional Scottish cat is a beautiful gray color, or so-called blue is very popular. Usually kittens have a lighter shade, which with age starts to darken and takes on a characteristic glow.

Exhibition type of the breed represented in gray-blue color, which should be uniform throughout the body. 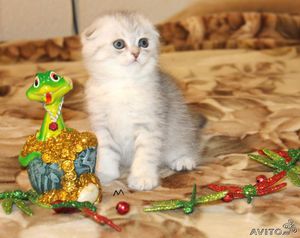 Scottish cat with cream color is very beautiful, but are quite rare. They have peach or leopard print shades, which may change the brightness depending on the temperature increase or the beginning of the shedding period.

With cream color cats can be copper or amber eyes.

Scottish cats of this color can be both male and female. But you should know that this color is only transmitted through the maternal line, that is, red kitten Scottish fold breed can appear only if the cat has the same color. If the ginger cat, and the cat, for example, a blue color, the offspring will be other shades, but not red.

This shade is quite rare and is considered one of the most expensive. Thanks to the breeding in the world there are Scottish fold animals Cinnamon color as plain and spotted. Many breeders are trying to breed this colour. Kittens usually have bright colors. Nose, paws and tip of tail can be painted in shades of brown with touches of pink. Breed Scottish cats, with colors of Cinnamon, chocolate can have shades of color or reddish.

Scottish kittens purple shades appear in the offspring of cats that have a pedigree of the representatives of this color. Many people like animals coffee shades. Cats have similar coloring can be copper or bright orange eyes. On the nose, usually spots the color of coffee with milk. 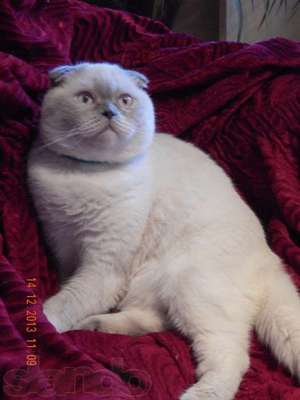 It is believed that all white cats are descended from one Scottish fold mother. White animals are not only amazing coloration, but also shades the eyes. They may meet the eye of one color, e.g., blue, copper or amber-orange. Also, sometimes there are cats with different color eyes – one may be copper, the other blue.

Kittens of the age of one can on his head to be a different hue, e.g., blue or black. With age, cats are a different color disappears and it becomes white.

White Scottish cats can sometimes be deaf, but this does not affect his other qualities.

Cats of this coloration can be of two types – the classic tabby, also called marble or striped. Scottish fold kittens are usually colorful and have the nape and over the shoulders of circular rings, usually a darker color than the base color.

Striped and marble cats can have such colors as:

Marble cats can be identified by the letter “M” and a striped tail. Silver and marble cats can have green or yellow-green eyes. It looks very nice. 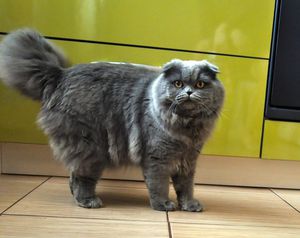 Since these animals are short-haired, they do not require any special care. It is necessary to organize periodic combing with a special brush for cats and wash as needed. In order for the cat felt good enough to brush it once a week not more.

For the health of the animal must also clean his ears about once a month. This will help to avoid many diseases and to maintain hygiene at the appropriate level. You must also take care of timely clipping, this must be done to ensure that the animal could not to hurt anyone, including yourself.

Little kittens are usually born with straight ears, but after a few weeks they add up and appear typical of the breed Scottish fold cats.

As a rule, small cats differ from cats in appearance, they are the same size and have the same characteristics of the breed. Over time, the males grow larger. To give to the other family of kittens usually begin at the age of three to four months, when they have adapted well to the world and mastered the necessary skills to live independently.

Adult animals of this species usually grow quite large, they can weigh three to five pounds.

Price category can be different, usually it consists of several paragraphs – it costs the breeder for the maintenance and education of the animal, and also depends on the shade kitten. Usually individuals that have erect ears are way cheaper than fold. Their cost can range from forty to eighty thousand rubles.

My mom has a cat Scot, he for many years and he was a real member of our family. With age, the animals become something similar to their masters. We were very lucky one day to find it and I want to say a big thank you to the breeders who at all times don’t forget about their former Pets, call and come to visit. Scottish fold cats-this is what you need for a person.

When I got my cat a Scotsman, became a lot more fun. These animals are wonderful companions, with whom never boring. Cats are just lovely, large, with gorgeous soft hair and beautiful deep eyes. My pet brightens up the long cold night, as it probably happens all the lonely people. Thanks to everyone who came up with this breed and breeders and sells these beautiful cats.

My son asked to have a kitten. We decided to have a Scot. Wanted such as in advertising Whiskas, we love it in this as seen on the screen. These animals are just beautiful. Their character and appearance will amaze anyone who loves affectionate animals. I want everyone to say, if you want to find yourself a real friend, you should pay attention to animals the Scottish fold breed.