The wildlife is very diverse, people are constantly discovering new animals, who want to domesticate. The African Serval cat is no exception. 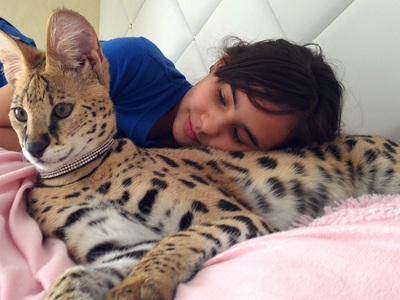 Serval, or shrubby cat, as they are called — the bright representative of the cat family, the tiger has the color of a Cheetah and the graceful gait. Few people familiar with this breed, but seeing once a cat you will definitely want to buy it. 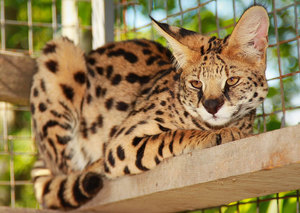 The birthplace of the servals — endless plains of the African Savannah. Therefore, these cats are very fond of freedom. There are only about forty species of shrubby cats, some of them are even listed in the Red book. The fact that poachers have caused great damage to populations of these animals, since a long time has destroyed them to get a beautiful fur.

They prefer to settle along streams in thickets. Hence their other name of “Bush cats”.

In natural habitat the cats prefer to hunt for hares, rodents and birds. Sometimes attack small antelopes. Prefer to hunt in the early morning, just before dawn, or late in the evening when the sun went over the horizon.

Despite their wild origins, servals feel very well in captivity and become affectionate and cute Pets. Domestic cats live from 15 to 20 years, whereas in the wild their life expectancy is only 10-12 years.

Serval — a real predator, this is evidenced by his color and physique. Height at withers in this animal make 60 cm, body length of about 130 cm, not including the tail. African Serval, the owner of a powerful legs and well-developed muscles, his jump height of approximately 3.5 meters and more. They have the longest legs compared to other felines, and very long and wide ears. These cats are able to hear their prey very far. The weight of an adult is approximately 18 pounds. 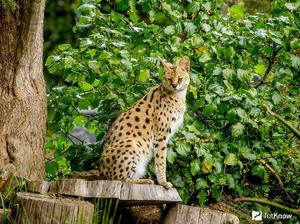 Servals do not like loneliness, so they should be given a lot of time and often to play. While the Serval is still small, play with him on the carpet, often lowering his face to his eye level. Then the kitten will be able to quickly memorize the features of your face. Servals, though long domesticated, are wild roots, so I love to play and run around outside. For walking you need to purchase a collar and leash.

Servals are very touchy. In order not to lose the trust of pet never use force for educational purposes. It is better to spray water in a rambunctious cat, is it cool. But most often quite simple comments to favorite rest.

Servals, in contrast to their domestic compatriots just love the water. You need to wash them about once a week, and in summer you can go to the countryside to rivers and lakes. Shrubby cats have a good reaction, so floating in the waters, often entertain themselves by catching fish.

Feed the servals normal cat food and not human food. Their diet should consist of fresh meat, chicken bones and wings. Adult cats eat forty-five grams to 1, 5 kg per day. To maintain good health is also required to give servals vitamin supplements with calcium.

What kind of meat you can feed shrubby cats?

Salt and spices is strictly prohibited to add in food of the African cat, also dangerous for him raw pork — it can cause Aujeszky’s disease.

To teach the Serval to the toilet is not difficult. It only takes a few times to show and explain where to go.

Also Serval is required to comb and clean his ears once a week. 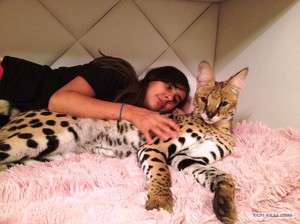 Servals are very social and calm animals. They easily get along with new owners and a good attitude to children. Friendship with young family members due to the fact that African cats are very active and love to play. Children are good partners in the games and walks.

Breeders are recommended to buy kittens Serval home while they are still at an early age. If the kitten will grow with you faster it will get used and will feel safe in your company.

Servals are very comfortable with the rules, to educate them much easier than other members of the genus feline. Shrubby cats are smart and clever, they correctly perceive the information and understand what is required of them. They believe the owner and his family and gladly accept its rules and diligently perform in the future. If cats feel sympathy for the man, they see a rumbling and jostling him. Meow servals are no ordinary cats, their voice is more like a bird chirping.

Choosing what to do with such a pet, keep in mind, servals love to climb and hang on anything, which can use a variety of wires and cords. So prepare for these purposes, some kind of thick cord or rope.

Shrubby cats love soft toys. Favorite toy they always carry around, even sometimes sleeping with her and from time to time chew. When choosing soft toys for pet select toy medium size — small he could easily swallow.

Pet can start to chew on that and your belongings to prevent this action sprinkle them Apple spray, it will turn away Serval from such actions.

In games Serval be sure to show the boundaries, as they are prone to gamble in this state little control. If during the game the cat is in pain you grabbed, bitten or badly pushed — no need to shout or swear. Silently gather all the toys in and out of the room, firmly closing the door. He immediately to calm down and understand what is done. Servals thin feel mood of the owner. They quickly realize what you’ve done. In such cases, the cat will draw conclusions and come to accept himself.

African cats, by their nature resemble dogs. They faithfully and lovingly relate to home, love to play as a dog: to compete, to select and bring abandoned things. Shrubby cats don’t mind the neighbors — they are good to themselves and similar to non-aggressive dogs.

Keep in mind — the Serval is a wild roots, so he has a well-developed sense of self-preservation. If the cat badly frighten or inadvertently hurt, he will immediately rush to the attack, although they never attack their masters. The animal will not be to blame for such a reaction — as it is an uncontrollable action caused by instincts. So be careful when playing with a Serval, and explain to the children that this cat in any case can not grab the tail. The most surprising thing, in such cases — the cat that bit the owner, has long endured because of this guilt.

Breeders there are three main rules in the upbringing of an African Serval:

How to take care of the health of Serval

The little kittens need eyes eye. They are very active and curious animals, constantly trying to get somewhere higher. Make sure that the kitten didn’t climb too high on the surface. Toddlers have not yet fully formed bones, and drop or jump from height can result in serious fractures.

Diarrhea is an unpleasant occurrence for bushy cats. If you notice diarrhea in your pet, immediately consult the veterinary doctor.

Servals, like all Pets should be vaccinated. But keep in mind that the vaccine should not contain active viruses. Wrong solution for vaccination will lead to the death of the animal.

At the age of one year servals female must be sterilized and castrated cats in seven or eight months old. The need is due to the fact that servals are viciously territorial, sometimes about fifty times per hour. The whole thing is accompanied a very unpleasant and pungent odor. The only way to avoid such problems — time to sterilize the animal.

Buying and the cost 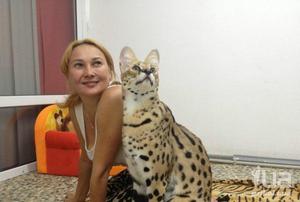 It is recommended to buy a Serval kitten aged 1.5 to 5 months. The younger the Serval — the easier it will be to get used to him and him to you.

To buy Serval please only specialized nurseries with good reputation and with all the necessary licenses. The cost of such a kitten varies from two to seven thousand dollars. Of course, you can find the seller taking less, but not the fact that you will eventually get a healthy cat.