Panleukopenia is a deadly viral disease, which if untreated leads to the death of a pet. The virus that causes the disease, is stable in the environment and viable for a long time. It is important to take measures to prevent the defeat of the cats in case of suspicion should immediately seek the help of a specialist. 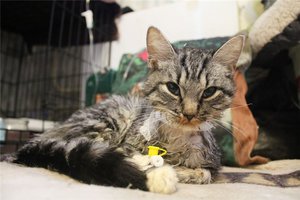 The virus that causes the disease, can be released into the environment with faeces, saliva or nasal discharge of a sick or recently been ill cats.

A pet can become infectedif the animal feeding use one bowl.

Panleukopenia is highly contagious, so cats are optional physical contact.

Kittens infected in utero are born dead or unviable.

The feline distemper virus is not dangerous to humans or dogs. It affects only cats.

The virus of the disease is resistant to the external environment. He does not die at high temperature and freezing, when exposed to disinfecting solutions.

Carriers of the virus can become blood-sucking insects, it is also possible infection and in utero.

Very often the virus affects young animals, to humans and animals of other species the virus is not dangerous.

As a result of his exposure in a short time is dehydration, heart disorder, disorder of the digestive system. Almost half of the unvaccinated adult cats with appropriate treatment dies, the disease 90% of the kittens also leads to death.

Forms of the disease

There are three known forms of panleukopenia in cats:

The symptoms of panleukopenia in cats

The first symptoms appear the animal in a few days. The disease is characterized by the following features:

Diagnosis of the disease

If a cat has shown some signs of the disease, you should immediately measure the temperature. At elevated temperatures should seek veterinary assistance.

The doctor should indicate whether vaccinated cat, if she entered in contact with other animals whether it has access to the street, how has her health and other behaviors.

On examination, the physician should palpate the intestines of the animal, to identify any thickening and to test for panleukopenia.

The danger of the disease lies in the factthat not every pet owner will pay attention to changes in the body of the animal and a timely appeal for help, the animal may die.

The veterinarian who examined the cat with a high temperature, vomiting and irregular bowel movement in the first place diagnose distemper.

To confirm the diagnosis, the animal is bled and a stool sample, swabs from the nose. The disease is characterized by decrease in level of leukocytes in the blood, which is a symptom of the disease.

Due to the factthat the virus resistant to the external environment, the cure of the disease is not established. Treatment is tailored to the individual symptoms according to the scheme drawn up by the veterinary doctor.

Usually, the therapy aims to eliminate symptoms and eradicate the virus in the animal body.

For the treatment of disease using drugs immunomodulirutee Fosprenil, Vitafel, Antistat created on the basis of immunoglobulin and destroy the virus in the animal body. The use of these funds is possible only in the dosage prescribed by a veterinarian. Unauthorized use of drugs can lead to death of the animal.

Usually Fosprenil for the treatment of feline distemper is used according to the following scheme:

The dosage depends on the weight of the animal. Animals weighing 1 kilogram using 0,2 ml of product cats up to 5 pounds using 0.5 ml.

It is important to carry out activities for the treatment of dehydration. In these purposes use a solution of sodium chloride in the dosage specified by the doctor. If there is no vomiting you can use Regidron with glucose.

To increase daily urine output should give the cat herbal diuretic herbs: cowberry, bearberry or horsetail.

The use of antibiotics may on prescription. It is aimed at the destruction of pathogenic microorganisms.

Iron supplements will be the means of preventing anemia in cats. They are administered in combination with vitamin-mineral complexes.

Recovery of metabolism in the animal body should use the drug Catosal that apply within 7 days in form of injection at the appointed dosage.

To relieve spasms of the stomach and intestines recommended the use of antispasmodics no-Spa, Dibasol and.

To speed up the recovery of your pet should adhere to the following rules:

If the animal suffered the disease at an early or old age, he may develop a number of negative consequences in the form of disorders in the respiratory and digestive systems, the activities of the heart and blood vessels.

In any case it is impossible to ignore the vaccination of cats. 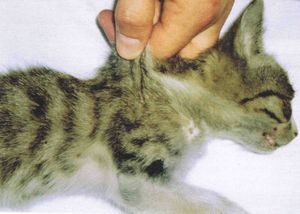 An effective preventive measure against panleukopenia is timely vaccination of the animal. With the introduction of the vaccine in cats develop a strong immunity that will protect animal throughout the year.

The animal is vaccinated after pre-deworming. The use of vaccines is allowed for kittens from 9 weeks of age, then three weeks later re-vaccination is done.

If a cat ill with a dangerous disease, should take measures to prevent re-infestation of the pet.

This should be carefully treated with disinfectants premises, which contained a sick cat and litter tray and a bowl of the animal.

6 Comments on “Panleukopenia in cats: symptoms, forms of the disease and treatment”