Persian chinchilla — real aristocrats. They are beautiful, graceful and loved by many. Thanks to its luxurious wool, they often become the stars of the TV screens and advertising posters. And the chances of winning in various beauty pageants have these wonderful cats is much higher than in other breeds. 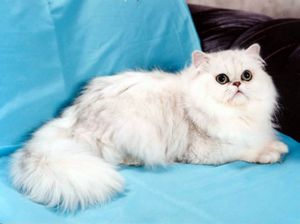 The second name of the Persians — silver Lambkin. As the birthplace of Persian chinchilla believe England. There was the first representative of this breed in 1882 and immediately won the love of those around you thanks to its charming appearance. Stuffed the first Persian chinchilla is still at the natural history Museum, where it stayed for about a hundred years. It should be noted that the shape of the breed has undergone very minor changes, because originally these cats had darker fur than it is now.

Its incredible popularity and widespread these cats owe the granddaughter of the Queen of England, Victoria. She was crazy about the charming of the coats of Persian chinchillas and their gentle and docile nature.

The highlight in the appearance of the chinchilla, of course, is wool. Not only is she incredibly beautiful, but very delicate and pleasant to the touch, and when touch scribe resembles fur.

Standards for Persian chinchillas are as follows:

An interesting feature of chinchillas is called a veiled color. A large part of the hair is painted in white color, but the tip may be a pigment of different shades.

And the rare “red cameo” or “cameo cream”. In this case, the tips of the hairs have a reddish or beige color. Also rare, but there are Golden and silver chinchilla. The color of the latter is particularly reminiscent of Arctic Fox fur. 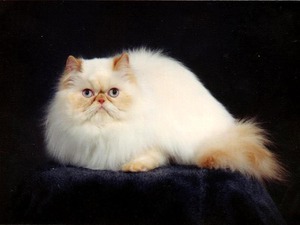 As mentioned earlier, it’s incredibly cute and gentle Pets. They will RUB against your legs, demanding attention and affection. While you are at home, the cat will not depart from the owner on a step. But do not worry for the safety of the apartment during your absence. Persian chinchilla love to lie on the sofa, snuffling quietly, or to observe what is happening outside the window, waiting for your return. They will always find something to your liking, you can spend hours playing with themselves. These curious kitties get through all the most secluded places in the house in search of something exciting.

Kids love these pussies, and in return they respond with the same tenderness and love. But the other cats of this breed will not be tolerated. Not worth the risk to have another pet, to avoid fights over possession of territory. Besides, they won’t tolerate if you pay attention to other animals. Chinchilla is quite capricious in this regard and will want to all the affection went only to them.

These kitties are not only very beautiful, elegant and graceful, but also have a quiet and calm personality. They behave peacefully, slowly moving around the house without destroying everything in its path and creating unnecessary noise.

But to care for Persian chinchilla it is not simple. The fur of your pet will need care and attention not one or two times a week, and everyday.

One of the most serious problems is considered to be education of a different size mats. The long coat of the animal slipping every minute and every day you have to deal with these kinds of troubles, not to bring the case before the circumcision luxurious wool. For a start, cats brushing in the direction of hair growth and then against. Because only in this way you will be able to properly care for the duplex coat of your pet.

There is one more troublethat can waylay you on your way. The fact that chinchillas have poorly developed tear ducts, but because the animals often suffer from tears running from their eyes. Is not only necessary to wipe the eyes of the pet, but also to ensure that no infection is able to penetrate. To do it is not so difficult, you just rinse the eyes with special solutions. But in any case not to treat it lightly, because Persian chinchillas fairly large probability of occurrence of diseases of the retina.

Unlike many other breeds, the representatives of this very positive attitude to walking. They will not struggle and scream, but only quietly to enjoy nature together with the owner. 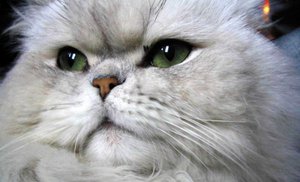 This aspect in the care of the cat should be approached with special attention. Persian chinchilla exhibit a tendency to obesity, which can cause very serious health problems.

Feed the cats only dry food, related to the premium class, as well as natural products. Among the latter, preference is given boiled chicken and beef, eggs, vegetables that come as a Supplement to meat and fish dishes. It is desirable to mix the feed bone meal.

Observing the delicate care for your pet, you can grow a loyal, affectionate and beautiful pet that will every day to bring you joy and love.