Cat breed the nebelung started in the US and is artificially derived. Today we will tell about history of origin of this breed, how to identify these cats by their appearance, what their personalities and habits.

The breed of the Nibelungs, and can confidently be called “silk”, both externally and in terms of character. 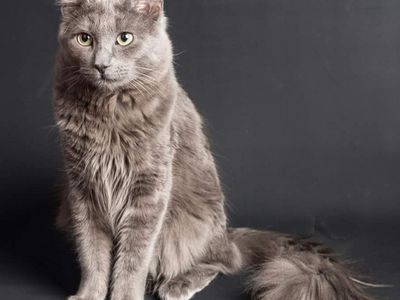 The origin story of the cats of the Nibelungs

As a separate breed, the Nibelungs emerged relatively recently. In the early 80s of the last century of goals in Denver (USA) by crossing a black domestic Shorthair arrakoski and cat breed Russian blue. In the end the kittens were born, one of whom had a solid blue color, long hair and long legs.

The owner of this kitten decided to give it the original name is Siegfried, after the hero of Wagner’s Opera “Ring of the Nibelung.” Other cat resulting from the crossbreeding of different breeds, had long and silky hair.

As in the Wagner Opera Siegfried was his beloved brünnhilde, mistress cat and named. These two kittens Siegfried and brunhilde became the founders of a new breed, allowing offspring. So there was a breed of cats, the nebelung, the owner of the cats made their own breed standard.

Many experts even now don’t perceive cats Nibelungen as a separate breed, because in many ways they resemble the Russian blue. Nevertheless differences from other breeds are still present, so the world population of representatives of the Nibelungs, slowly, but growing.

These cats are happy to play with their owners and are great friends, they will have Royal posture and fine manners.

Of the Nibelungs very well speak as a professional breeders and owners. Below we present the main characteristics of the appearance of representatives of this breed:

The character of the animal 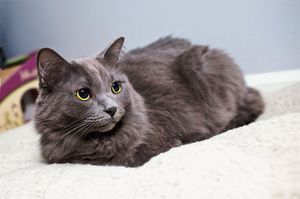 Cats, the Nibelungs are very kind and sweet. You could call them conservatives, because to new conditions or to new people they get used for a very long time, and only after the final mastering I already feel confident.

The Nibelungs are not Intrusive, but they are usually very very attached to one family member. They will be very loyal and always trying to please his master. But with the other members of the family they are playful and good-natured, but a huge attachment to experience will not.

The nebelung is not the breed, whose members like to be alone.

To determine that the cat is bored, one of the following:

In this case, the cat should not be punished, it is likely that she does all this not out of spite, and to attract the attention of the owner. For this reason, if you are rarely home, it is better to have another pet to it when you are out, could entertain the Nibelung.

Often, many pay attention to that cats the Nibelungs and compact for comfortable life they do not need much space. Such a good pet will feel like in small apartments, and spacious suburban homes.

The voice from the breed is very quiet and melodic. They do not tolerate the cries, the noise and scandals of the owners. They can hide under the bed, and in some cases, can attack the person who sounds unpleasant. 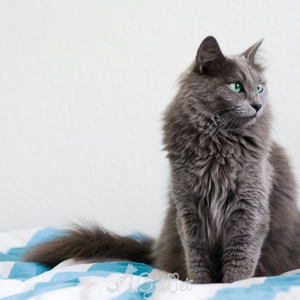 The breed of the Nibelungs, and were very healthy. The breed lacks genetic disease, this case is unique in the sense that artificially bred animals have a good health. Of course, the usual diseases of cats threaten the Nibelungs, along with other breeds, but if the animals time to instill and drive to the vet, they can be avoided.

The average lifespan of these cats is about 15 years, flowering occurs in approximately 2 years.

With regard to the care of the animals, the most important thing here is to follow their hair. Despite the fact that it does not form tangles, her need to constantly brush the hair to free of dead hair removed on time, and had the illusion of “lightness.”

It is important to knowthat cats need bathing is not necessary as it may adversely affect the quality of wool. But if water treatment is still needed, then it is impossible to carry out with the use of yellow or pink shampoo, because the dyes in its composition can affect the color of pigment.

Lather the cat only need in the direction of hair growth, also before the procedure be sure to plug the ears of the animal with a cotton swab.

But to be in the sun these animals is contraindicated. The direct sunlight is capable of destructive effect on the pigment of the coat. In the end, “branded” blue color cat is lost.

How to feed pet

Experts recommend that young kittens of this breed to be feed only with natural products. If in the future you plan to bring Pets on ready to feed, then slowly introduce them into the diet of the animal.

However, it is still believed that even the adults of the Nibelungs, it is best to feed natural products. But natural diet is very important, so it was full. To cook organic food – it is very costly in terms of time, it should also be taken into account.

Remember that to improve the quality of cat fur she needs to eat supplements, which contain sulfur, and vitamins A and B.

It is strictly forbidden:

All of these products may adversely affect the coat color.

The cost of cats of the Nibelungs 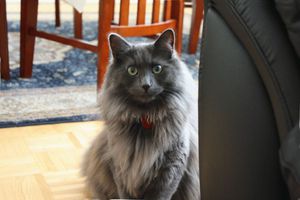 If you want to get a kitten of this breed, remember that this would be very difficult. Not in every city there are nurseries where you can buy. For example, not in Moscow or Minsk, or Kiev. The only in the CIS cattery, which is engaged in the Nibelungen, is the “North Star” (Saint-Petersburg).

The nebelung is a breed very mysteriousaround her is legendary. For example, the theory that the breed’s name comes from Wagner, not completely confirmed. There is another version of the origin of the breed is from the German word nebel, which translates as “fog”. However, what version would not be correct, cats of this breed’s adorable and kind.

11 Comments on “Cat breed the nebelung and its characteristics”