Today is very difficult to find someone who would be indifferent to animals. Perhaps that is why according to statistics, about 70% of the houses or apartments inhabited by Pets. They help the person to brighten up his loneliness and give the love that can’t give even real people. One of the most desired animals in the house is the cat. Since ancient times, there were beliefs that these mustachioed man’s friends had supernatural powers.

Now we are talking about one of the most unusual representatives of the family cat, a cat with short legs. Cat breed Munchkin, aka the cat-Dachshund, has gained wide popularity around the world due to its unusual appearance. Their main trump is considered a little unusual for us to see paws. Despite his defect, if it can be called, these “dwarfs” is more mobile than any other cat. They move like ferrets and in fact, and second do not sit on one place.

The name “Munchkin” these cats were obtained from small mythical creatures from fairy tales about the land of Oz. The history of these unique creatures begins in 1983, in the United States. One evening, a resident of Louisiana, Sandra Hochenedel, found under an old, abandoned van, little ball of fur. It was a dirty, hungry cat with unusually short legs. The woman thought that the animal is crippled because of the harsh conditions in which it existed before, and took her to his home.

Soon it turned out that the cat waiting for the offspring and all newborn kittens are adopted yourself a defect of the mother. The day when the kids Ezhevichka (so was the cat’s name) was born, and I think the inception of the breed Munchkin, short legs kids inherited as a result of natural mutation. 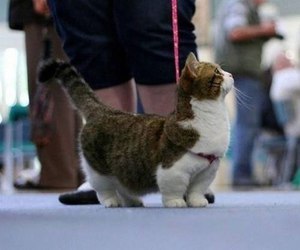 The contemplation of the representatives of this breed is each has a palette of different emotions — from pity and ending with pure delight. It is very hard to hide his smile at the sight of such fascinating creatures. And even despite the fact that a breed standard is still undecided, you will learn Munchkin. Broad head, medium nose with a slight deflection, confident, highly set ears and tail, flowing like a feather, and beautiful eyes, shaped like walnuts, and each color is deep and unique.

The hand is the main feature of this breed is separating them from all other cats. They are short but direct. And in their activity Munchkin is no different from the ordinary domestic cat. Weight korotkolapye ranges from 2 to 6 pounds, and is shiny and smooth wool is renowned for the difference of color.

Since all animals are divided into subtypes, it is also worth to distinguish three main varieties of Munchkins:

Today, in addition to purebred Munchkins, there is already a lot of purposeful selection, that is, the symbiosis of two species, one of which is korotkolapyh.

This crossing of these animals can be grouped into a small rating:

It is clear that the owners their Pets will never talk about them in a bad light. The owners of the Munchkins included in this list and respond on their Boyfriends in a very special well. The Munchkins are considered to be one of the most gentle and affectionate cats. Despite its not character defects, they are self-sufficient, intelligent and cheerful. Don’t expect these babies to mess in the house and broken dishes — they are simply incapable of it. They are easy to get used to new people in the house and also do not suffer from neurosis.

Like all earth creatures, even the Navy seals have their quirks. They will help you to overcome laziness and complacency, because all the scattered things, they’ll drag far away from human eyes. Also, this little monkey respects your privacy and asks you to. So I have to get a small, cosy house for him.

The only problem is the little delectables is called lordosis, namely the weakening of vertebrate muscle, which descends into the chest. Kitten hard to move around due to the pressure of the spine to the internal organs. This disease is rare, but is treated very seriously, because not developed enough. Therefore, experts recommend that you regularly visit the vet with your animal. 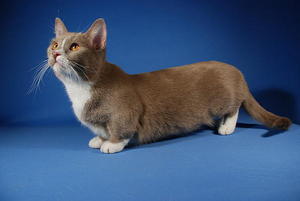 The love that we receive, we should give to others. And Munchkin, this is primarily cats, who have their own specific needs. This baby demands attention and care. So get ready for a gentle combing of wool, difficult manipulation of washing cats and also the care of the ears, eyes and claws. The most important item is toilet — bumpers must be low to meet the specific requirements of your pet. These animals are not special gourmets, but also for clearly diet need to follow. It will be quite a bit of dry feed or natural meat. If you follow these tips, then Munchkin will be very grateful.

Representatives of this breed is a little, but they are very popular. The range of prices starts from $ 250 depending on the exterior, may dosagethe numbers 800. It is likely that due to the uniqueness of these furries, animals get to be somewhat problematic. But believe me, after this little miracle crossed legs on your doorstep, you will never regret it.

2 Comments on “Breed of cats with short legs”