For many people cats are Pets. But what diversity there is in the wild! Some of them are so rare that is already listed in the Red book. 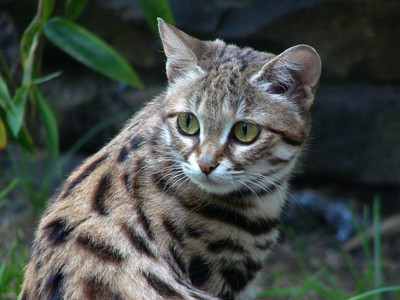 This article provides 10 varieties of rare species of wild cats, the existence of which you might not even guess:

The Bengal cat is a wild cat of small size. Of all the cat is the most common type. Very beautiful breed. It resembles a small leopard. This cat was created in America. On the creation of this cat worked a lot of time. And here at the University of California has created a wild cat that is appropriate for home detention. This animal is considered the most intelligent among the other breeds. Wild Bengal cat is much larger than its home counterpart. Bengal cats live in South and East Asia.

These cats live in a quiet, deaf, deciduous forests, necessarily close to water sources. During the day, they usually sleep, but an active life starts at dusk and night. She often climbs on trees and there waiting for its prey to attack it from above. Offspring usually cats give 2 to 4 kittens. Eat the animals, the size of which can handle, for example, squirrels, mice, birds, rabbits.

The population of wild Bengal cats is reduced. Because of the beautiful fur of her steal. The local population makes of skins clothing and jewelry. Because of this wild cat listed in the Red book. 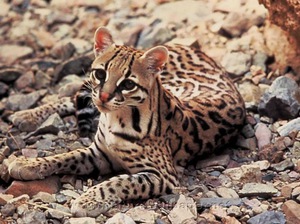 The far Eastern forest cat, also known as Amur leopard cat, is much larger than domestic cats. This species is found in the far East in dense mountain forests. It feeds on small rodents, catching birds, and sometimes hunt for hares and ROE deer. Amur cats breed offspring up to 4 kittens, and education involved father. Far East forest cat is a rare species. He is listed in the Red book of Primorsky Krai. Beautiful and valuable fur attracts many poachers. But in spite of all prohibitions, the destruction of rare species are all equal continues. This soon lead to the extinction of individuals of a rare breed.

Sand cat (sandy) — it is a very beautiful representative of its species. These cats live in the desert. All my life they look like kittens, despite his age. The main difference of this breed is the peculiar form of the head, and that on the surface of the pads she has fur that protects from the hot surfaces.

Representatives of this breed is accustomed to living alone, so they appreciate personal space. They are well hidden from enemies, not in the sand leaving their footprints. They hunt for snakes, birds, insects, gerbils. Hearing the cat is well-developed, so she can hear the approach of food or enemies. Moreover, it is very neat. Always inspect the area before you continue. The offspring they produce up to 5 kittens. They remain blind after birth still 12-16 weeks. And the 4 month kittens leave the house.

Currently, there are 4 subspecies of sand cat. Due to the very secretive way of life the number is very difficult to quantify, but approximately it is determined in 50,000 individuals.

Manul bright representative of steppe breeds. This wild cat is very similar to domestic cats of noble breeds. He has a fluffy coat and a round shape. Usually in the wild, cats live up to 10 years, but in zoos their age can reach 20 years. Like many other predators Manul hunts at night or dusk. Usually feeds on rodents and birds. In a litter is usually no more than 6 kittens. Manul is on the brink of extinction. Because of the very great secrecy the exact number of individuals cannot be called. 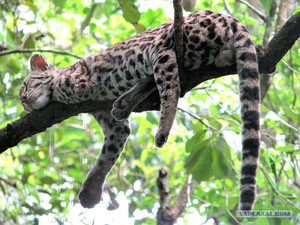 Black-footed cat — the smallest representative of the African wild cats. On the pads of her paws is growing fur that protects the animal from the sand in the desert. This species inhabits southern Africa in the dry plains, savannas, steppes, thickets of grass. The cat eats birds, invertebrates, reptiles, rodents. Usually hunts at night, but it may come in the early morning in places where no man.

Like all other members of the cat living in dry areas, so long can survive without water. Usually the light females give birth to 1-2 kittens. Targeted hunting for them is almost non-existent, but they often die from poisons and traps intended for other animals. Therefore, these representatives are listed in the International Red book.

The clouded leopard lives in Southeast Asia in the jungle. It is quite an ancient appearance and bears little resemblance to the leopard. This species hunts both day and night. He has excellent agility and excellent vision. On his prey he hunts on the ground or from the tree. He usually eats goats, deer, pigs, monkeys and large birds. It is quite brittle climbs trees and swims well. In a litter in a clouded leopard is usually born to 5 kittens. This cat is very susceptible to extinction. His beautiful skin is quite profitable. Animal meat are served in the best restaurants in Asia. Bones are used in medicine. The view fades out, listed in the Red book.

Panuska cat (grass cat) lives in parts of Argentina and Chile. This kind of the cat’s size is not significantly different from domestic representatives. They can be found in the desert, the fertile plains and in moist forests and swamps. She eats rodents, birds, insects and lizards. Basically, the female gives birth to 1-3 kittens light. On today 7 known subspecies of these cats.

Yaguarundi include in the genus Puma. Yet it is called the wild cat. Habitats of representatives of the species: from southern United States to Northern Argentina. They mainly live in savannas, swampy areas, tropical forests. This predator is active round the clock, unrelenting and attacks anyone can overcome. The trees is taken reluctantly, and only in cases of extreme necessity. Yaguarundi eat poultry, fruits, rodents, birds and insects. The offspring they bring 2 times a year 2 to 4 kittens. The people of South America at one time domesticated cats to safeguard their homes. But they bring great damage to the household, so soon this idea has refused. 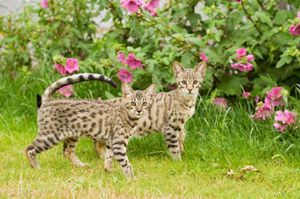 This predator inhabits almost all areas of Africa. It is found in open areas and thickets of grass. Servals hunt only at night. Their diet consists of frogs, hares, small rodents, small antelopes and birds. They are excellent hunters. Expense great ears they can easily hear any rustling, high limbs allow you to move silently in the grass. Servals are lonely by nature. They find a mate only during the breeding season. The female gives birth to usually 2-3 kitten and care for them during the year. This species of cat are rapidly decreasing in number. Its fur is highly valued, and the meat eaten. Therefore, it is listed in the IUCN Red list. 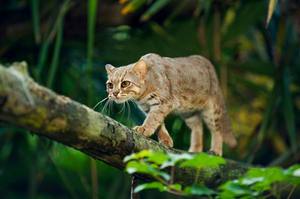 Ocelot is the brightest and largest representative of the American cats. It inhabits North and South America in tropical and subtropical forests. It is rare to find in open spaces, because it is very secretive. Hunt only at night and dusk and during the day hides from prying eyes. Methods of production from the cat is different. He perfectly climb trees, hunt on land, and moves by swimming. Food eats small rodents, monkeys, rabbits, birds, insects and snakes. Cats usually give birth to 1-2 kittens. Annually reduced the population of the species. The fur of this animal particularly valued, and deforestation leads to habitat loss.

Often the animals listed in the Red book “thanks” to the man. Poachers hunt for treasure these rare animals:

Take care of nature and she will be grateful.

One Comment on “Breed wild cats: features, types and photos”