Like other beings, cats may have different inflammatory diseases. Among these common and not too common disease – eosinophilic granuloma. Provoke its beginning the cells related in structure to white blood cells called eosinophils. Initially they are part of the immune system of cats, but failures in their work, a number similar to the symptoms of diseases, United by a common name. The disease is not a simple and easily treatable, we must persevere to restore pet health. 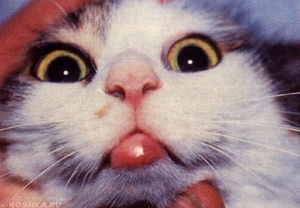 The exact mechanism of eosinophilic granuloma is still unknown. The doctors can’t answer the question why cells that protect the body from viruses and bacteria, suddenly begin to create health problems. There is a theory that eosinophils are mutated under the influence of pathogens.

The factors that trigger onset of the disease, include:

The main thing – to be attentive to your pet in order to notice the beginning of the disease, because any disease is easier to cure in initial stage, not leading to chronic process or disease progression.

Varieties of the disease

Just allocated to three types of disease, distinguished from each other by place of occurrence and manifestations:

In all three cases can be inflamed next to the centers of the granulomas in the lymph nodes that is easily detected on inspection at the vet. 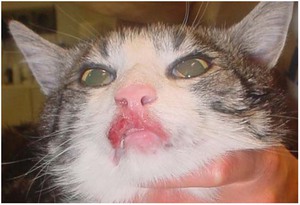 A specialist will be able on external signs to determine eosinophilic granuloma and to distinguish it from diseases with similar symptoms. But for confirmation of the diagnosis will need to conduct a histological examination of the inflamed tissue by taking a sample of them. After all, benign, and malignant tumors, abscesses and some other diseases can occur similarly.

Tissue examined under a microscope on the subject of typical granulomas inflammation. Determined the quantitative content of eosinophils. If it is considerably exceeded, it is safe to diagnose. Even if not precisely defined subspecies granuloma, treatment because the tactics of therapeutic measures in all types of granulomas will be the same.

It is very important to identify the factor contributing to disease. Usually, if a component is excluded , provoking allergies, treatment is faster and more efficient. It would therefore be necessary to conduct Allergy tests. The definition of the allergen takes some time, but this procedure is important. It is possible that the disease has an autoimmune cause, in this case treatment will be aimed at reducing symptoms.

Some species of lichen can be similar in appearance to granuloma, but, unlike it, ringworm is transmitted to humans. Therefore, you should not try to self-diagnose. Any damage to the skin the cat needs a vet.

Treatment of eosinophilic granuloma in cats

In connection with the version of the involvement to the appearance of granulomas pathogens, antibiotic therapy occupies a leading place in the treatment of this disease and usually gives off. Cat for 3 weeks give twice a day the medication “Doxycycline” or 1 time per week injections “Cyclosporine” (only need 4 injections). Dosage you calculate the doctor, depending on pet’s weight.

To eliminate itching on the skin often used hormonal drugs, they have a good effect but cause rapid addiction. Over time, this symptoms may in fact increase. Besides, the immune system will suffer. Prednisone is most often administered at the appearance of eosinophilic granuloma in cats, the treatment is carried out until until the sores would not heal up. Cancel the drug gradually, watching to avoid any recurrence.

Is there any prevention 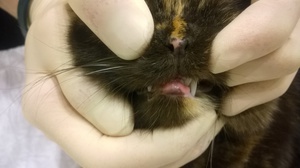 Pet need to organize a full and proper nutrition, observing that the food was not an allergic reaction. It was the scratching from allergies can be the basis for the manifestation of eosinophilic granuloma.

The skin of the pet should be regularly inspect to identify dysfunctional symptoms. After all, if the lesion is large in size, the treatment may fail to join secondary infection, and the animal will die.

Matters and health care for the cat. It is necessary to regularly brush and wash a special hypoallergenic shampoo eliminates the accumulation of germs.

7 Comments on “Causes and treatment of eosinophilic granuloma in cats”