These Pets are attention deprived. Otherwise can not be. We are talking about the smallest cat breeds in the world. The following is a description of each breed. 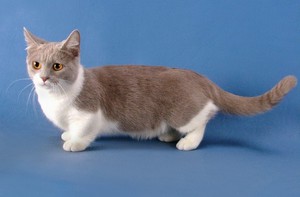 This, undoubtedly, is one of the smallest breeds of cats. An adult cat weighs less than 2.5 kg. These dwarf cats have short and thick coat. Another distinguishing feature – a short fluffy tail. The beans love to be photographed. Normally react to the flash. This breed is not afraid of fire. The beans are easily trained, they can be taught commands as well as dogs. By the way, little kittens meowing like a dog barking.

This breed is also vying for the title of smallest cat. Happened to Singapore from a non-pedigreed domestic cats, who anciently lived in the area. Cats coat is short and shiny. They have a good body. The male is larger than female and have a weight of about 3 kg, females 2 kg.

Outwardly, Singapore has a very elongated face and large ears, muscular body and large. The nature of Singaporean cats are very affectionate and loving, have a very good health. Now these cats are widespread throughout the world.

This breed of small cat has its own distinctive features:

The appearance of this dwarf breed was involved in three of the breed.

This breed descended from the mixing of three dwarf cats: American curl, the Sphynx and Munchkins. Delfos a lot of similarities with each of these breeds. The name is due to the fusion of two words that means the cat-elf. Such a fabulous name was reflected in the appearance of these Pets.

Coat color in cats may be different. But the behavior is peculiar. Delphi affectionate and sedentary. In any case it is not necessary to be unkind to him. These cats are proud and easily offended. Can even hide inside to cope with feelings of resentment. The weight of dwelf in adulthood about two kilograms. These mysterious Pets are now living in different parts of the world. 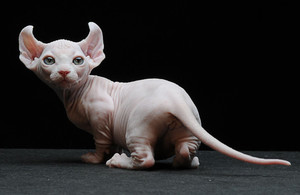 This breed of small cats contrast fees. They have very short legs. Their favorite position is to sit on their hind legs. With the tail pinned to the floor. In this position the cats love to sit and look around you. It looks very funny. Their maximum weight is 4 kg. In General, look like toy Munchkin cats. Have a strong body resistant to disease. Munchkin like the owners and have humility.

Breed unusual way. Two married people got the kitten and gave him the name of the Bambino. From furry animal was quite unusual appearance. As it turned out, he was born as the result of crossing two breeds: the Munchkin and the Sphinx.

Bambino’s Italian as a child. If you compare it with someone, you can also detect a resemblance to the Dachshund. He has the same short legs and elongated body. Interesting detail: the tip of the tail could be a brush. Bambino hairless, so they are very often cold, especially in winter.

The breed is related to the small cats, which is similar to lamb. Hence the name. Lambrinov curly hair. The weight of these furry “babies” can reach up to 4 kg. Relative to this breed of cat can be called one of the newest. In addition, they are considered as rare species. In the world there are only a few dozen.

This cat also came through a crossing of several breeds. Napoleon descended from the descendants of the Persian and Munchkin. Napoleon, too, have their own characteristics:

These cats appeared in the UK. Externally, they are very beautiful: big ears, short whiskers and clearly highlighted the eyes, which emphasizes the slim Devon Rex.

A breed of small cats feels great in the society. The Devon Rex to give, and a small child, because their wool does not cause allergies. The appearance of these Pets majestic and noble. But, like all cats, they are playful and mischievous. In the world these individuals a lot. 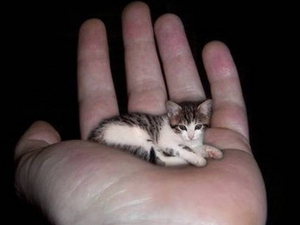 These Pets outwardly resemble the Siamese, from which they actually happened. In General, their homeland is America. However, they have a long coat and a bushy tail. From the Siamese cats they got the color, graceful body. The Balinese have a weight of not more than 4 kg. Slender they are also passed on from their ancestors.

Little Balinese kittens are born white as snow. Over time, they acquire a color similar to Siamese. These seals are very friendly. You can display them on a leash. It is important that it is not too tight.

This amazing pet appeared in Illinois. It is different from other cats by its miniature size. Its weight was 680 grams, length 18cm. And the parameters in Tinker was the rest of your life. Sadly, the mini-cat only lived to 6 years.

One Comment on “The smallest breed of dogs and cats”