The Scottish fold cat is a special animal in the world cat. These cats can be called “popular”, they are the pride of the Scots.

Scottish fold cat will become good companions to their owners. Fresh air will be very useful for pet. Should be sure that the animal was vaccinated according to his age. Buy him a leash and harness and teach to walk.

Cat story began with a happy event: in one ordinary Scottish barn lived an extraordinary cat Susie. The ears of this cat were bent, and she was pure white in color.

So would Susie lived in stagnation, catch mice, Yes saw well deserved milk, if on the way she met a shepherd named William Ross. It was an unusual shepherd: he was fond of cats.

Seeing an unusual cat, William certainly wanted to buy such a beauty.

Later, when Susie had kittens from the usual cat, William purchased one of them — cat, which he called Snooks. This cat, later, William was crossed with the British Shorthair cat. From this Union were born fold Shorthair kittens. From them came the beginning of the breeding Scottish fold cats.

Initially, this breed called “Scottish fold”, but then began to add the word “Scottish”.

Susie was a long-haired cat, and some individuals have long hair. If one of the parents had short ears, all subsequent generations were born with floppy ears. If one parent was long haired, long coat handed down to future generations. Gene breed is very strong in this breed. 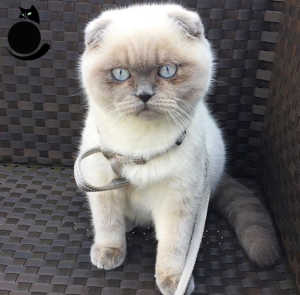 In addition to the appressed ears, the representatives of this breed is characterized by pleasant to the sight, thick coat. It looks like the plush. The texture of the Scots uniform.

At first, it is impossible to determine how to grow a kitten Scottish fold cats: their ears start to fall off at the age of 4 weeks. 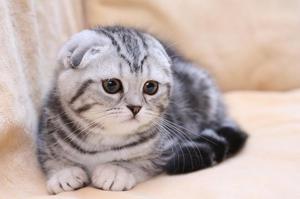 Scottish fold cats are not hyperactivity and temper. A serene, calm, confident animals. These Pets are very attached to the person. They love ssget next to the host, or to watch over him. Voice fold cats is unusual. It is not like an ordinary meow. A little squeaky. Someone says that Scottish fold cats can’t meow. Probably, this statement is not without truth.

Scottish fold cat, sometimes, becomes on two hind legs. This occurs when a cat is looking out, or from surprised or puzzled. This feature attracts photographers and there are many memov, and pictures dedicated to this position cats.

Kittens Scottish fold playful and energetic. Moving around the house, in the presence of the kitten, you need to be careful and look carefully at his feet. It is a good idea to buy a special bed, or a house for your little fold kitten. Scottish fold kittens love to play and play. Buy for them the toys: balls, bows, balls, and mice. 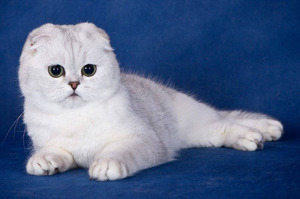 The breeding of Scottish fold cats is not without exceptions, and errors. At initial breeding, it was noted that Scottish fold kittens born from parents of the same breed, had in physiology, some deviations from the rules.

It was either too soft spongy fur, or other manifestations of mutation.

Later, having identified shortcomings, the breeders began to breed Scottish fold cats straight. It gave a positive result: mutations and abnormalities have been identified. Thus, at the moment, crossing two fold cats is prohibited.

At first, the cat is a Scottish bred with exotics. From these marriages were born normal kittens. But over time, they have ceased to function a tail. It came to a full fusion of the vertebrae, which led to back pain and lower back pain. Later, from exotics as parents refused. Began to cross the Scots with the British Shorthair breed.

The appearance of kittens, it was observed that the parents, having long hair, kittens are acquired by inheritance long, thick shersti. But the greater density of wool, were made by crossing short-haired and long-haired animals. 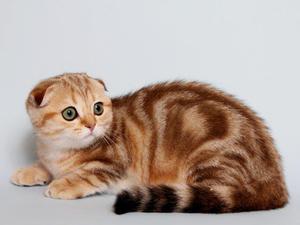 Scottish folds are distinguished by good health. The only drawback caused by korotoumou, are diseases of the spine (osteochondrodystrophy).

But the disease is not often. With good care, and care, the lifespan of a Scottish fold cat, will be twenty years.

It is important to monitor the cleanliness of the ears. The ears should not have a plaque, scabs and spots. Upon detection of unusual events in his ears, the pet should be immediately seen by a veterinarian. The doctor will prescribe the correct therapy in order to help your pet overcome his illness.

In addition, it is necessary to monitor the cleanliness of the eyes. You can wash the face of an animal, boric acid, or ordinary boiled water. 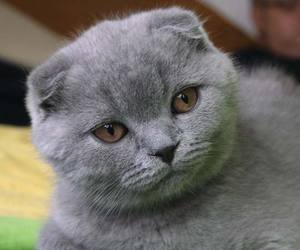 These animals are very docile towards children. They will not scratch, does not bite and will not hurt the baby.

It should teach the child how to handle animals and not to cause him pain and discomfort. And then, the Scottish cat will be a true friend and a great companion at the games master’s child.

This breed is considered one of the smartest. Scottish fold cat able to distinguish between some teams. She performs them. But what cat wants to do, it is impossible to enforce.

The rejection of a particular commands or actions cannot be suppressed.

These cats are quite clean. They are easily accustomed to the tray. Sharpening their claws, they also, in the same place. 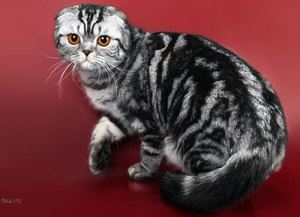 For full life, a pet needs to be fed. It is necessary that food and water were in the trough. The cat can at any time feel the hunger and need to satisfy it.

Power fold pet may consist of natural products, or of quality of the finished feed.

In the case of natural food, you should prepare for the future the following products:

If you choose prepared food, you need to buy premium food. It contains all the essential vitamins and mineralsthat are so beneficial lop-eared cats. Typically, such foods do not cause allergies, which is also undoubtedly a great factor for its acquisition and use. 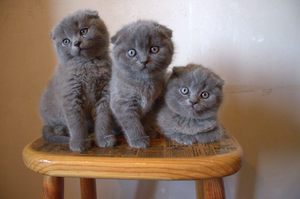 All kittens are divided into three categories: pet, breed and show class. All these VDI different price. It is best to get a kitten in specialized nurseries. The recommended age for the purchase of a kitten is twelve weeks.

At this age, have already formed the necessary signs of breeding. And, easy to identify abnormalities, if any. In addition, at this age, the kitten eats confidently and independently.

If the purpose of buying a kitten is participation in exhibitions, show — class, it is recommended to buy an animal at the age of one year. At this age, already well distinguishable traits of a pure breed.

When purchasing a kitten remember to ask the breeder what to feed a kitten the whole time. Transfer to a new food, in the first days of the appearance of a kitten in the house, unwanted. Such an experiment can result in disease of the digestive system of the kitten that tragically affect its acclimatization in the new and strange, yet of the room.

Kittens Scottish fold is fed with a frequency of four times per day. This allows them to gain weight. To achieve a kitten of eight months of age, it can be converted to two meals a day.

As previously mentioned, a pair of the same breed, mating is not allowed. Binding between odnorodnymi prohibited. It can result in the birth of defective animals with genetic mutations associated with diseases of bone and cartilage of the skeleton.

For mating it is better to choose a lop-eared cat and straight kitty. Or, on the contrary. Sometimes, the lop-eared Scots crossed with representatives of the British Shorthair breed. It gives a lovely litter.

Females ready to breed, at the age of eight months. But do not hurry, at this age, cats are still not quite fully grown. Better to unleash the kitty, at the age of eighteen months, or later. Then, the body will cope with pregnancy and with childbirth.

Pregnancy cats Scottish, lasts 58 — 78 days. The cat gives birth from one to four kittens. But, to determine how many of them will fold, impossible.

The birth, that is, childbirth, and continue for days. But, most often, they occur much faster. It is necessary, if the birth first, to be near the cat so she doesn’t feel the danger, and was peaceful.

Caring for a Scottish fold cat

To care for a Scottish cat is not difficult. You should regularly brush her fur, to examine ears and eyes. Wash your pet can be, but should do so only when absolutely necessary — if the animal is heavily polluted. Monitor the length of the claws. Try to make the cat a pleasant leisure. Food and water should be enough. Toys should always be available.

Some of the nuances of care for the animals 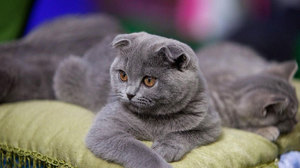 Exclude from use the slicker it will not bring any benefit and can spoil the appearance of the family pet. The ears of the Scottish fold are more vulnerable to the accumulation of sulfur than the ears of other cats, so carefully clean ears and clean them in time, observing great caution. Eyes Pets, also require careful attention. You should clean them as necessary but at least once a week.

A variation of Scottish fold is cell party Scottish straight. These cats do not have wrinkles on the ears, however, all other features (cheeks, legs and tails, as well as, head shape) are typical for the breed Scottish fold. Fur they are not long and ears sticking out, as in ordinary cats.

All of these items will help the owner to improve the quality of care fluffy pet.

Buying a Scottish fold, or in other words — Scottish fold cat, the owner receives an affectionate, loving pet who will bestow their tenderness all family members, without exception. This clever and charming the beast will be your best purchase.