Siamese cats are small animals, characterized by long wedge-shaped head. Their limbs have special colors, unusual for other breeds, so Siamese is difficult to confuse with other cats. Popular Pets due to their pristine because they have never been crossed with other breeds. Let us consider in more detail what is a Siamese cat, a description of the breed and character. 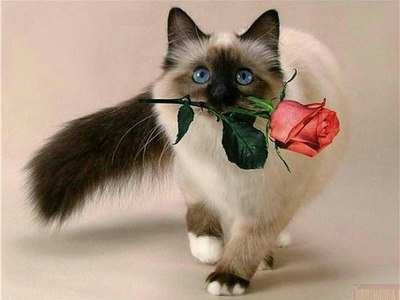 The history of the breed

The birthplace of Siamese cats – Thailand. In this country these animals are considered sacred in the temples they were respected and protected by law. The Royal family used cats for various rituals. As a result, the Siamese were forbidden to take abroad, but this animal still after some time came to Europe. Siamese cats are often mentioned in Thai tales and legends.

Currently not known for certain, how did Siamese cats. Most likely, there is such a breed of wild Bengal cats. The proof of this is this fact, that of the wild Bengal cats and have a Siamese pregnancy lengthll of not less than 65 days, whereas in other breeds the duration of pregnancy is 55 days.

The spread of the Siamese breed in Europe occurred in the late 19th century, when these animals are brought to the English Consul, which gave him a Thai king of Siam. In America and other countries they came much later. Today there are about 40 varieties of this breed, among which are monotone (blue, purple, black and other).

Breed Siamese and has the following features:

A special delight of the eyes a bottomless blue, slightly slanted, almond shaped with slit. For this breed is characterized by strabismus, as the cats chosen way try to correct a congenital double vision.

Very interest and coloration of these animals: paws are cream-coloured, and the tail and ears are moving into chocolate. Such an unusual color distribution is the result of uneven melanin production, which depends on body temperature: the colder is the area of the skin, the lighter the wool. 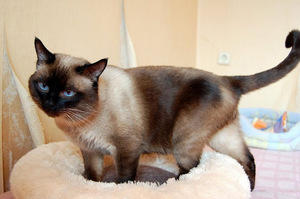 Siamese kittens are born completely white, and as they grew up, they begins to show the distinctive color-point. With age there is a decrease in contrast, and elderly cats and cats become much darker than young animals.

Weaned kittens from mother cats when they reach the age of 1.5 months. By this time they weigh approximately 800 grams and they have their first teeth appear. Siamese kittens 2 month very active and independent, they adapt quickly to new conditions and get used to strangers. At this age babies no longer need breast milk, so there will be no feeding problems.

When choosing a kitten you need to pay attention to his behavior: if he shows aggression and is dominant over the other kittens, then it is likely that he will begin to claim the leadership in the family. To tame a toddler will not be easy. If Siamese kitten weak and indecisive, you may grow up shy and introverted. It is best if the baby will be friendly and relaxed. In this case, it will grow into a loving and loyal animal that doesn’t have any problems.

You should know that Siamese kitten, which was 2.5-3 months, extremely difficult to tolerate separation from the first owner, so quite often the new owners are experiencing difficulties with its domestication and education.

The nature of the breed

Different Siamese cat a distinct personality, wit and intelligence. Many owners of such an animal to underestimate his intellectual abilities, but in vain! Due to its nature, the pet can be a real manipulator and to subordinate the will of the owner and his household. The cat is able to determine the weaknesses of man. In addition, she is cunning, resourceful, and can soon become the center of attention. Siamese cats know their value and do not allow anyone to communicate with them frivolously.

Representatives of this breed do not tolerate:

If the animal is to constantly experience stress at home, pretty soon he will be. Interestingly, Siamese cats are perfectly absorb not only the tone of a person, but his speech, so when dealing with such animals need to be very careful, as for the rude words in the address, it might retaliate.

Proprietary traits Siamese cat owner may feel that if she will allocate it among other family members, will belong only to him. The animal of this breed are very proud and touchy, he strongly expressed a sense of fairness and does not forgive the punishment without guilt. 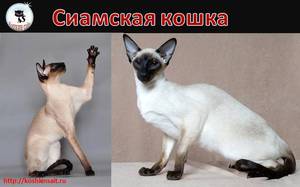 By nature it is very temperamental cat, so what is the impact of her Eastern origin. Her boundless energy can inspire or drive you crazy. It is not worth waiting for tranquility in the home. This pet does not like undue attention, or a dismissive attitude, will not tolerate persistent attempts to hold, to caress. In response, the cat is able to scratch or even bite. The owner must exercise patience and attention to your pet, to feel his mood, to respect and to reckon with him. The same thing should be done and the rest of the family.

All their claims and requests a Siamese cat expresses voice, methodically and persistently. A wide range of notes used by animals for communication, not every owner has to appeal. The owner should try to establish a good relationship with him and promptly comply with all its requirements. In this case, he will not hear loud noises.

Siamese Pets are not very fond of guests and other animals, showing them indifference. They are very jealous and can behave unpredictably. With children and animals formed a rather controversial relationship. These contact and active cats can easily accompany the child in games, but if they accidentally get hurt during the games, they can take revenge. Siamese cats breed – not the best option for families with children.

This breed is quite unpretentious and it is easy to maintain. Below animal hair was soft and silky, does not require additional devices. Only a few times a day to stroke his wet hand, causing her to stick all of the fallen hairs.

Pet need to be bathed periodically, but not too often, as excessive use of detergent can spoil the quality of hair and lead to baldness. Conduct other hygiene procedures, such as trimming claws, cleaning ears and teeth, is no different from other breeds. 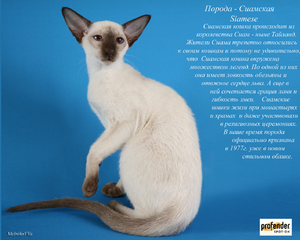 Siamese kittens are quite often born with strabismus. This defect does not affect their quality of life. Quite rare to year eyes take the normal position. The second is a fairly common disorder, “broken tail”, which purebred animal disqualifiziert with fair competition.

Most often, Pets have problems with the bronchi, so Siamese kittens should always be warm and dry. In healthy animals the nose is always slightly damp. If it starts to flow and appear wheezing, that indicates it’s about the beginning of the disease.

These animals are long-lived, because with good care and proper feeding they can live up to 20 years.

What is the nature of the Siamese cat from a cat? 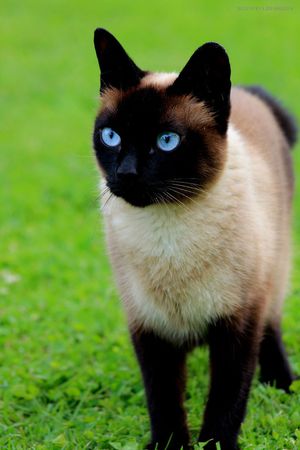 Before you have a pet Siamese breed, you should decide whom to choose: cat or cat. You need to know some peculiarities of their character.

By the nature of the Siamese cat is an independent animal. He always tries to dominate the house and not consider the feelings of the owner. The cat sees its owner as a useful item that exists in order to meet the needs of the animal. A man takes care of the pet, feeds him and plays with him. For a cat he his grateful. But his love is kind and is reminiscent of the indulgence.

Siamese cats are curious and active, they tend to explore all corners of the house, even against the will of the owner. During the mating period the males often show aggression, so they should be castrated before they reach sexual maturity.

Siamese cats are much calmer and nicer than cats, but their emotional and always openly show their feelings to the owner. They seek to win the sympathy and love of man, and require from the owner a return of attention.

Cats are clean cats. They can spend hours licking their fur, so the owner does not have to worry about the unpleasant smell in the house. But problems occurred when reaching female sexual maturity, because it’s pretty hard to put down, they have the instinct of procreation.

There are two ways to solve:

Thus, cats Siamese breed to raise is quite easy. This should be done from the first days of appearance of the animal in the house. Regardless of gender, the pet has its own character and requires a different approach to it. The main thing is to show him aggression. Only the affection and sincere love can make of a curious kitten, well-behaved cat.

40 Comments on “Siamese cat: the breed characteristics and character”