Meowing pussies live almost in every family, but most owners choose for the role of pet males. The reason for this become a regular sex hunting cats, which are accompanied by intolerable behavior.

To ignore the heat in the cats and not allowing to approach her cats also undesirable. It can cause suppurative diseases of the reproductive system female, which are then removed only by surgical intervention. To keep in order the nervous system of the pet owner and pet itself, it is better not to wait until the start of the sexual inclination, and at the first signs of estrus to react on the situation. If fluffy pet is not planned to keep for breeding should be sterilized her even at a younger age. In the case of pedigree cats, which should bring the offspring to look for her cat, too, need a few months before the planned mating.

How long is the estrus in cats 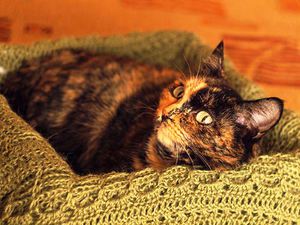 The norm for the duration of the estrus females of the cat shall be a period of 5-7 days. Usually the first 2-3 days the cat just cuddles up to the owner, requiring increased attention, but if she can’t provide the cat, then all the subsequent time the cat will loudly howl, calling himself a man. Low trumpet sounds the animal makes around the clock, which very affects nervous as all living together with animals in the same house.

To prevent such situations it is necessary to worry and to pick up the animal a potential sexual partner, with whom the cat will be bred at the first signs of the beginning of the hunt. This is especially true for representatives of the tribal pedigree cat’s, the value of which is confirmed by numerous documents, and sometimes exhibitions.

When the house is home to the most common cat “for the soul” and the owners have no desire to deal with her offspring and endure night screaming in heat, it is best to sterilize a pet before the start of the first sexual hunting.

When the cat starts the first heat

To get healthy offspring, the cat at the time of birth should be fully formed and healthy. This is achieved at the small cat at the age of 1 year, so knit animal should be no earlier than 10 months (the gestation period lasts 65 days).

If the first estrus, the cat began before this age, you knit it to produce offspring is not desirable:

If the first estrus , the cat began before the allowed time, then the owners should think about its value, because such disposition will be inherited to all its descendants. When the animal is important for the owner even with the disorders in the body, early estrus female, preparing for the future of the breed, it is necessary to alleviate special preparations that normalize hormonal balance of the animal.

Most veterinarians use homeopathic remedies. They are usually used for sexual hunting females and their complete absence in adult animals. Medicines eliminate all violations of libido due to the normalization of hormonal background. 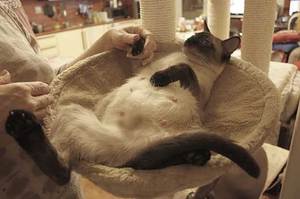 If estrus in cats lasts longer than normal period in 7 days, then homeopathic remedies will not help her. Sometimes, when a cat comes in heat and can’t get out of it, making her restless behavior continues for more than 10 days. In such situations the owner has to make the decision about mating females or castration. Only this will bring the pet from its long-standing desire.

When no heat long

Some representatives of the cat’s temperament does not allow owners to relax from the constant discomfort associated with frequent chutes and endless calls of the males, while other things are completely different. Many tribal representatives of the species, which are specially becoming for further breeding, just refuse to show interest in the opposite sex. When the cat for a long time does not appear in heat or between her sexual appetites, it takes several years, the animal is necessary to help. To cause attraction of the cats with a special of veterinary drugs, but only in extreme cases.

Among them the most used are:

Usually, the vets suggest to start with more natural methods of calling a libido. For this ward, which is necessary to cause the heat, put together with other female cats, with the calls of a sexual partner in the active stage. In nature, cats are often flowing at the same time, so the sexual hunt is one of the representatives can provoke the same desire and the other.

If no friends no cats, call for heat you can use a Mature cat. The smell of the male is able to activate a cat’s instinct to procreate and to provoke the beginning of estrus. How many can occupy time for such a process depends on the animal.

Signs of estrus in cats 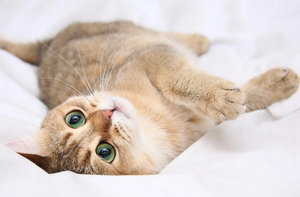 Usually, the animal begins to exhibit unusual behavior before the start of the heat. This is manifested in increased attention to the owner and petting. Favorite begins to require constant stroking and attention from the person and becomes very Moody. It happens that cats are constantly worried to hang around the house and meowing as if looking for someone. Exactly how many days can this last period is not known, all depends on the individual characteristics of the nursling. In any case, the beginning of estrus, the owners did not miss.

In the period of intensified sexual heat in the females start to behave very provocatively. They are stretched on the floor, ottoperuna his ass, and loudly call for cats laryngeal deep and very loud sounds. During this period cats are constantly rubbing against various surfaces, howl and scream. On their call, or the smell can come of street cats, and the pet at any time can run to him, therefore, you should carefully follow her.

During libido, the animals go to a variety of tricksto mate and for the owner it is important to prevent unwanted binding in all ways. Pets locked in rooms, tied to it, and even dress up in clothes that cats are unable to get to the females. At this time the responsibility for the conception quality offspring rests solely on the owner.