Wild cat or wild cat is a subspecies of the wild forest cat, which appeared about 130 thousand years ago, long before the advent of man. Until recently it was believed that Wildcats about 10 thousand years ago domesticated the Egyptians. This species is the ancestor of our domestic cats. 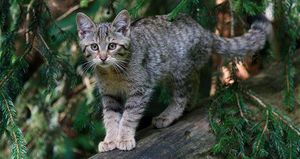 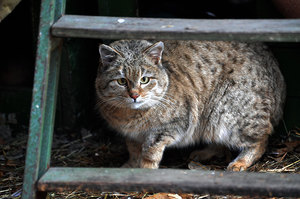 And not only Ancient Egypt, but all over the world:

Despite the fact that the wild cat is a subspecies of wild cats, they have differences. Wild cat has a smaller size compared with wild forest cat and short hair. The coat color of individuals of this species is sandy or grayish hue. The tail is covered with dark streaks and spots as the upper part of the body that allows steppe cat to pass unnoticed. These mammals have a high, strong body with a muscular physique. The average weight of about five kilograms. Legs powerful and strong.

Steppe cats are able to completely retract the claws in the paws, thereby silently sneaks up to prey. On small, slightly elongated muzzle are large almond-shaped eyes. Eye color is mostly amber.

The habitat of this species is quite wide. Despite the name, wild cat prefers the sandy foothills near marshes and ponds. They live in Central and Central Asia, meet in the Caucasus and Kazakhstan. They can be found in Northern India and even the Mediterranean Islands. In Russia, traces of this view can be found in the Astrakhan region. Steppe cats are often found near human dwellings in search of rats and mice. This kind of avoids snow-covered areas, as not adapted to forage for food and hunt in deep snow. Despite its name, wild cat avoids open areas and rests in the Bush. Not afraid of water, if necessary, can swim across a small lake or river. 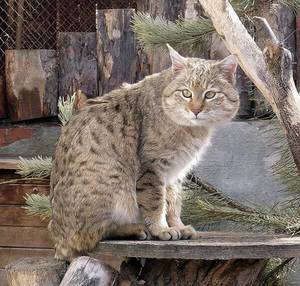 Wild cat — a predator. It feeds on mice, rats, ground squirrels, jerboas. Do not hesitate also birds, insects and amphibians. Due to their sharp claws of the cat is perfectly climb trees, allowing him to feast on eggs from birds ‘ nests. Wild cat hunts mainly at night and dusk. Day in burrows. Hunt steppe cats in different ways:

When faced with larger predators wild cat usually hides in the dense crowns of trees or flees. If escape failed, the cat picks up “on end” wool hollow out arch the back, thus trying to intimidate the enemy. During the attack, the cat falls back and bounces sharp claws.

Males of this species lead a solitary lifestyle. Males jealously guard their territory from invasion. Females settle close to males and, if necessary, can be combined with the male in order to get rid of outsiders.

From January to March, males and females meet to breed. For one female may take care of a few males. The female always chooses the very large and healthy male. After mating, the male takes no part in caring for the offspring. Pregnancy in steppe cats lasts about two months. Healthy females are usually born with three kids. Young females usually give birth to one kitten, older cats happen to six kittens. To output a offspring female finds a deserted burrow of a Fox, porcupine or badger. 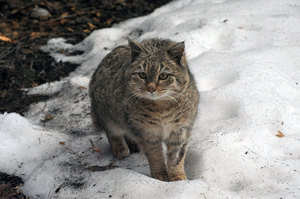 Dwelling of steppe cats made simple is a straight course, ending the deadlock 100-150 centimeters. The female extends a dead end and makes a bed of dry grass. Kittens, like cats, are born helpless and blind. The maternal instinct of steppe cats are highly developed, so the offspring she never throws. The first few months they are totally dependent on the care of cats. 10-14 days after birth kittens open eyes and auditory canals.

The female feeds the kittens with milk for about two months, then gradually begins to accustom to meat. First brings kittens dead prey, then half dead and, in the end, the living, thereby gradually teaching the offspring to hunt. Three months after the birth the young begin to leave the burrow and go out hunting together with the females. Within six months, the female cares for the offspring, then the kittens begin an independent life. A year females ready to mating period. Males begin to reproduce after two years.

As with any animal, wild cat has its own characteristics. For example, the coat of Wildcats thick and rather short, and, unlike forest cats, whose fur in the winter becomes longer, wool Wildcats this property. In winter, when cats lack food, they can appear near human villages and raiding poultry.

The life expectancy of these cats in the wild is low — five or six years. In zoos steppe cats live a lot longer — ten to twelve years. To people of this kind was incredulous and meetings with the person avoids. Steppe cats are very quiet animals — even in areas densely populated by them, to hear their challenge. Now the population of steppe cats are rapidly declining in connection with the loss of familiar habitats. These animals are trying to save from extinction and to preserve their population in the wild. The species listed in the Red book.