Ringworm is a disease that often occurs in cats. His appearance provoked the fungi dermatophytes. When infected in Pets primarily affects the skin. Often, the development of the disease suffer the claws and wool. Intrigue of the disease lies in the fact that it can be passed from pet to person. It is therefore essential to identify it early and contact your vet for appointment of adequate treatment. 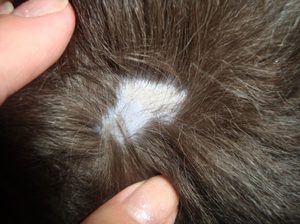 Most often, the appearance of ringworm happens to homeless cats. However, it is not uncommon for Pets contained in the home, sick with this illness. If your pet is often outdoors, then a high probability of catching herpes from other cats that are already carriers of this disease. Spores of the fungus that trigger this disease, are usually small in size, so they can be on shoes or clothes. In this case, to be infected with the disease may even be a pet that never leaves the street.

Often the appearance of ringworm in cats happens if they do not receive adequate nutrition, suffer from stress or have poor health. The Pets that have no health problems, the risk of this disease is minimized.

When on the animal’s body settled spores of the fungus, it affects all of the cat’s body.

If we talk about the main areas of the spread of the disease, these are:

When the cat appeared the first symptoms of the disease, the task of the owner of the animal is to as quickly as possible to begin appropriate treatment of your pet.

To determine that the animal originated ringworm, according to the following criteria:

What is the danger of ringworm in cats?

Terrible disease ringworm in cats is not, however, gives the animals a lot of unpleasant moments. His perfidy lies in the factthat in this disease the animal may experience a recurrence of the disease. If the owner of the cats missed the primary symptoms of the disease and the time has not started treatment, the animal will suffer greatly because of the wounds that have arisen as a result appeared of lichen, can become inflamed and festering. After healing of abscesses in the cat can cause unpleasant scars.

Ringworm is a disease that spread quickly. Just a few days to the whole body of the cat was covered with red spots. If the fungus that appeared on the body of the cat, begins to spread, it is the destruction of hair follicles, which leads to the cat unpleasant bald patches. If the disease is run, then the consequence could be the defeat of the cat lymphatic and dermal tissues. In addition, spores of the fungus have a negative impact on the brain of a cat.

How does ringworm in cats?

When developed, the animal has ringworm, the disease manifests itself in the following outward signs:

Most cases of ringworm in cats, characterized by inflammation, occurring weakly with the emergence of minimal itching. The occurrence of extensive lesions of the claws, the paws, and of suppuration and the appearance of fistulas occurs much less frequently.

Having discovered on the body of the animal signscharacteristic of ringworm, you should not hesitate. You must visit the veterinary clinic to the doctor make an accurate diagnosis and prescribed the necessary treatment. You should understand that the sooner treatment is started, the faster you will be able to save the animal from the problem of ringworm.

How to treat ringworm in cats?

In order for treatment to be effective, you must visit a vet who will prescribe the necessary medicines to effectively treat diseases occur in the cat. At the moment, offers many tools that allow you to successfully eliminate the symptoms of this disease. Some of the commonly prescribed by specialists tools we list below. 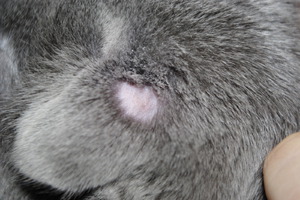 This drug was developed specifically to deal with diseases of a fungal nature have cats. Pharmaceutical companies produce this medication in spray form, and also offer it in pharmacies in the form of a solution. Substance Clotrimazole in this medicine acts as the main active compounds. Additional components in its composition are propolis, and glycerin.

If you use this drug, the pet owner needs to apply it on the affected area and gently RUB into the skin of the cat. Treatment this tool should be carried out for 14 days.

The companies that make this drug claim that its use side effects in animals are not available. However, veterinarians and owners of catswho have used this drug in the treatment of Pets, there were some unpleasant symptoms:

There is an opinion that in the pharmacy network, this means of analogues simply does not exist. However, to confidently state this quite difficult. But not questioned by the fact that in the treatment of ringworm this medicine demonstrates its high efficiency.

To ensure effective treatment of the animal, it is necessary to strictly implement all the recommendations contained in the instructions to this drug. The instructions indicate that the ointment should be applied to affected areas of the body. Ointment applied in a thin layer. Treat the problem areas on the body of the cat twice a day. The duration of the course this tool varies from 1 to 2 weeks.

In the composition of this ointment contains the following components:

The main advantage of ointment is a powerful antiseptic effect. In addition, this drug characteristic and high binding properties. Use this ointment for treating ringworm allows you to quickly cope with the disease and return the cat to normal. Pharmacies offered in a package with a capacity of 20 mg and at an affordable price point compared to other drugs.

This drug offers the Ukrainian pharmaceutical companies. It is characterized anti-Allergy and anti-inflammatory properties, and good antibacterial effect. The versatility of this medication is provided by the inclusion in its composition of betamethasone. Veterinarians prescribe a medicine course of 2 to 4 weeks.

This drug belongs to a group of drugs that can be used for the treatment of depriving not only in animals but also in humans. This is another drug produced by the Ukrainian pharmaceutical company. It is effective against pathogenic and parasitic fungi and also bacteria and yeast. The active compound in the composition of this medium against depriving acts miconazole. Veterinarians recommend treatment with medication for 6 weeks. During therapy it is necessary to pay attention to the following point: even if during treatment the symptoms of the disease have completely disappeared, however, even for 4 days you must use this ointment for the treatment of the animal body.

This remedy is highly antiseptic and disinfectant properties. If we talk about its structure, select the following components:

The use of treatment for ringworm helps to quickly eliminate this illness. When applying Fukortsin they treated the damaged areas with a frequency of 3 times per day. This treatment is carried out until complete disappearance of symptoms and elimination of the crusts on the body of the animal. The drug belongs to the group of inexpensive means, it has high efficiency. Therefore, veterinarians often prescribed for the treatment of ringworm it this way. 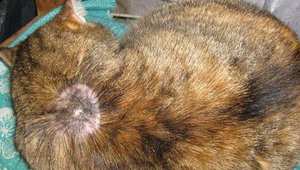 Although drugs for the treatment of ringworm in cats quite a lot, but some of them are quite expensive and simply not affordable to pet owners. In order to save the animal from any disease, at the same time to spend on curing a pet at least cash, you can use folk remedies, which are equally effective in the treatment of this disease. Some of the tools that help cope with this disease, we will present below.

Alcohol with salicylic acid. For cooking this means you need to take the alcohol in an amount of 30 ml and dilute it in tablet of salicylic acid. Then, the solution is used for the treatment of the animal. It washed the wound formed in the animal’s skin, using a cotton swab. Carry out the procedure should, with a frequency of 1 every 5-7 days. The application of this folk remedy helps to eliminate skin wounds pet.

To prepare the following tools you will need 5% iodine, Valerian and sunflower oil. Every ingredient you need to take 1 teaspoon. Ready solution is necessary to lubricate the affected areas on the body of cats with a frequency of 3 times a day . This tool is suitable for the treatment of ringworm in animals and people.

The following tool is based on wood ash and vegetable oil. The finished mixture is used for the treatment of wounds. First treatment with iodine, and then the wound impose slurry. This procedure should be carried out 1 time per day.

For the treatment of zoster in cats you can use the usual cream against the fungus. Is a great tool ointment Candida, which can be used for the treatment of this disease in animals and humans. The product should be rubbed into the affected area according to the following scheme: once a day for 2 days. After that the cat should atone for, and then allow it to dry. Then the procedure must be repeated. 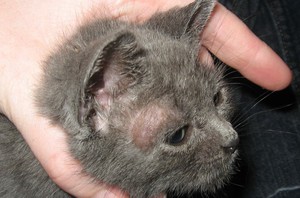 Shingles is a disease that often occurs in cats. They usually catch animals that often walk on the street. But even if the pet is not going for walks, in this case, the risk of Contracting this disease is also available. Spores small, and the owner of the animal can bring them home on shoes or clothing. Noticing the first signs depriving your pet, you should immediately contact your veterinarian. The specialist will examine, put an accurate diagnosis and will tell you how to treat a sick pet.

Today there are many drugs that effectively help to eliminate the symptoms of the disease. To effectively treat your pet and it is possible through the use of folk remedies against depriving. Recipes are on the Internet. Using them in conjunction with funds from the pharmacy, you will be able to save your pet from sickness and restore him to full health.

2 Comments on “Ringworm in cats: what it looks like, how to treat”