The Turkish Angora is quite an interesting breed, these animals have an incredible devotion and friendliness. In this breed it is impossible not to fall in love, they are smart and beautiful, and their peculiarity is the fact that very often such a cat is found different eye color. The Turkish Angora does not require special care that allows them to make this cat even with no experience to care for the animals.

Appeared Angora breed in the XVI century on the territory of modern Turkey. The breed’s name was in honor of the nation’s capital – Ankara. Many believe that ancestors Angora cats are Persian cats. After some time, the Turkish Angora fell in Europe, where many Royal palaces willingly brought these Pets. Due to the popularity of cats among the high officials, ordinary peasants were not allowed to keep white Angora cat in their homes.

In addition to the distant Europe, at the court of Russian Emperor also loved these wonderful creatures. In 1860 the breed was first described by the zoologist from Germany Alfred Brehm, where he noted that representatives of this breed are some of the most beautiful cats on the planet.

Description and characteristics of the breed

Traditional and accepted standards color Angora cats – white. The body of a cat proportionate with long legs and a bushy tail, resembling the shape of a feather of an ostrich, having a narrowing towards the end. Head cats have wedge-shaped, small size, neck of medium length. Ears rather short, with the presence of a small amount of hair in the sink and pointed at the ends. Eyes expressive, almond shaped, green, yellow or blue color. In addition to the classic white color, meet Angora cat with black fur and skin, and in nature there are cats of this breed with a bluish tint hair. Belly Angora cats hair is wavy, and on the hips wool formed small clusters, which can remind the pants. 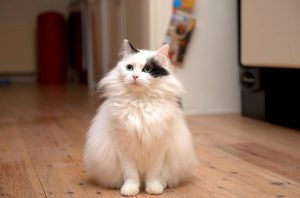 Often in nature there are Angora cats with white fur and different colour eyes. The weight of the Angora is from two and a half to five kilograms, with the males always weigh more than females. In General, the representatives of this breed are medium size, and the structure of the body depends solely on the sex of the pet. The body of the Angora cat long, proportional and flexible, the bones thin, the back is fairly muscular. The back legs of Angora cats is longer than the front.

The nature of Angora breed

As with any pet, an Angora cat has its advantages and of course disadvantages.

Shortcomings of the Angora and features: 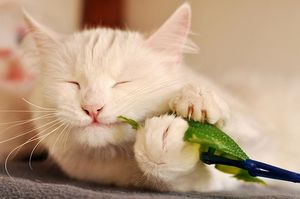 In General, the Turkish Angora can be attributed to the phlegmatic cats, it is somewhat slow and calm. It is important that the cat has excessive affection for his master. Angora feels mental state of a person and always seek to comfort him. To other animals is easy and can get along with them in the same area.

These cats are very playful, even being in a large age representatives of this breed do not miss the opportunity to play with toys, especially in the company of his master. Angora is quite curious, like guests, are always happy when they come, easily go on contact. As a rule, the cat originally is slowly coming to a new person and begins to sniff it, and if the person shows a response tender response, after a while the cat could easily be a guest on my knees. Due to the living temperament of Angora, to have such an animal in the house even if there are small children.

The Turkish Angora is a very sensitive animal and so they always require attention, respect and independence. Alone cat can spend a few days, she will surely wait for the host, and then a will respond positively to his return. But if you stay long with the cat next and not pay attention to her, then she will start to remind people of her presence by purring and meowing. Angora prefers to observe flying birds, high to sit, and sometimes even to resist an ambush. Thanks to sharp mind, representatives of this breed can learn to open doors between the rooms and Cabinet doors.

Females are very good mothers to their kittens, they are very quietly acting after the birth of the offspring, tenderly and patiently caring for kittens.

The big dogs definitely need the following rules for the care of her:

As mentioned earlier, this breed can meet cases of pathologies of hearing, but thanks to the latest selection of this factor was greatly reduced.

In addition, there are rare cases of Angora cats with the following diseases:

5 Comments on “Turkish Angora: description of breeds of cats”