Since ancient times, cats are attracted to people with its grace and mysterious behavior. Today there are several hundred breeds of cats, but one of the most notable are considered cat breed Turkish van. In addition, vanska cat is an excellent swimmer, can not be said about the other members of the cat family. What is more remarkable breed Turkish van? 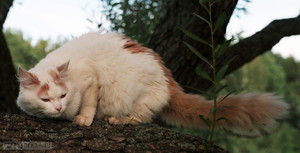 The birthplace of van cats is considered to be Turkey, namely the Eastern Anatolia region. The breed exists since the middle Ages, but was discovered by humans only in the mid-twentieth century. For the first time on an unusually beautiful animal drew the attention of tourists from the UK Sonia Halliday and Laura Get who came to Turkey for the interesting photographs. In this country women have seen large cats with long hair white and flaming red tails. Women liked cats, they decided to take the animals with them.

A little later tourists from the UK were in for a surprise:the women went into one of the reservoirs and vanska cat also gladly went for a swim! Laura and Sonya understood that domesticated animals are a unique breed of waterfowl cats, so initiated a formal registration of the breed.

Vanska the cat was assigned to a separate breed in 1969, and received the name “Turkish cat”. In 1979 in Britain, the name was changed and the breed called “Turkish van”.

Features of the breed.

The breed standard according to the international organization TICA, looks like this:

Turkish cat attracts attention due to its unusual color. Coat of the animal is white, but the head and the tail are marked with red markings, which cover no more than 20% cat fur. According to the breed standard, it is allowed and completely white color without any markings.

The Turkish van is not only beautiful, but playful cat who can be an ideal pet for a person. It is worth consideringthat vanski cat is an energetic dog so he can in just a few seconds to climb to great heights, for example, on the Cabinet, and long to be there. Wanski cat loves to play and frolic, especially if you put it in the water. Despite the friendly nature of the Turkish cats, it is not recommended to keep in the same area with other Pets, because he likes to feel superior.

With regard to the relationship with the owner, the Turkish van can be considered the perfect pet. Pet feels the mood of the owner that may affect her behavior. The cat is easy to train, so if the owner can devote time and attention to training a pet, he may hope for a brilliant result.

Wanski cat abhors a closed and dark spaces, so you can keep an animal in the apartment with a small area is not recommended. Man, to think about buying a Turkish cat, you should consider that this animal doesn’t like it when it take on hands. But to sit on the neck of the owner, this animal can hardly refuse, since it loves the top. Also wanski the cat will not deny myself the pleasure to sit on the windowsill and gaze out the window at what is happening on the street. 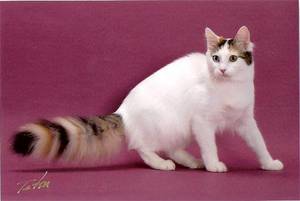 Cat breed the Turkish van is quite rare, which is reflected in their cost. In Russia, a pedigreed kitten can be bought not less than 7 thousand rubles (3 thousand hryvnias). The cost depends on the pedigree of the animal, its respective breed standard. To find a purebred kitten in the CIS countries is difficult because of the specialized nurseries here are very few. To bring van kitten from Turkey, but in this case you will need a special permit for the export of animal abroad.

Beauty, grace, intelligence and friendly nature – all these qualities are inherent to the Turkish van. If a person set out to contain the animal at home, he should carefully consider his decision, as the Turkish cat needs special care and living conditions.