Cats cope pretty well with stressful situations, but sometimes they still need help. For example, a pet never not long left the house, but his need to get to the reception to the veterinarian. Naturally, the animal will be nervous. After this trip, the pet may even be a few days to feel bad. 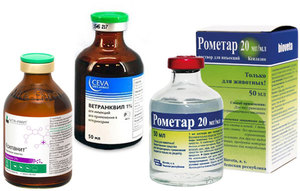 Some substances have on cats soothing effect, is in every house. But most often, their application yields the opposite result. Pets, on the contrary, become too active. We are talking about Valerian and cat mint.

Why these plants excite and soothe Pets? The thing in the existing misconception that if Valerian acts on humans as a sedative, and a cat, this plant should do the same. In fact, Valerian is a drug for felines. Its aroma acts on cats is exactly the same as “Viagra” people. The smell of Valerian not merely leads cats in arousal, it causes animals addiction, similar to drug.

Valerian understood. What about Catnip? Why is she not acts as a sedative for the cat? The fact is that Catnip is just a weak analogue of Valerian. Because of the less pronounced effects mint cat does not calm down, but not excited. Just its behavior changes.

It should be noted, that mint is not equally valid for domestic cats. Some Pets love it, others are indifferent to it.

As you can see, home sedative for cats does not exist. Why veterinarians strongly recommend that, if necessary, to use sedatives.

Medications – the most reliable and safe option to calm a cat. They are available in tablets and drops. They are great to soothe a cat in heat and not in the least aggressive cat. With their help you can easily transport animals over long distances, not driving them into a stress.

Consider the most popular sedative drugs for cats: 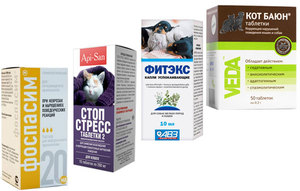 The most famous and quite popular hormonal drug with a calming effect – “Sex barrier.” Veterinary doctors do not recommend to use it without special needs. The drug reduces sexual desire in animals, but can cause four-legged Pets of dangerous diseases, including cancer.

If the owners did not initially wantto have their cat brought kittens, some veterinary experts recommend to make sterilization of pet. According to veterinarians, this is a more humane method of preventing unwanted pregnancy.

This is a stronger medications. Resorted to them when a simple sedative can not help the cat or the cat but still need to transport a pet. You see, when an animal sleeps, to carry it easier. However, to use a sleeping pill for cats is possible only after prior consultation with a veterinary specialist. Ideally, when a veterinarian makes an injection of hypnotic medication. However, any person can self – dose of sleeping pills and my shot.

Veterinary statistics show that euthanasia of Pets for transportation often use the following drugs:

All of the above, sleeping pills should only be used after prior consultation with the veterinary specialist. Overdose of these drugs can cause death of the pet.