Many miracles shows us nature without moving to surprise with the variety and quirkiness of established forms. The caterpillars hide in the cocoon, chameleon – skilled make-believers, and the bees can give us even an example of the organization of society. Similar phenomena are studied and explained from a scientific point of view, but still we marvel, and not all know why it happens so and not otherwise. On this basis, there are myths, for example, you may have heard that there is only tri-color cats tri-color cats but not Dating.

Cats with this coloration are often referred to simply as tri-colored cat or tortoiseshell cat with white. But it is, nevertheless, not the same thing. 3-color tortoiseshell is characterized in that the color of its coat black and orange with white spots or without them, and the tricolored cat, the main is just white. Some tri-colored cat on the belly have the pattern of a spiral. However, people often ignore these nuances, and therefore tortoiseshell and tricolour cats they are one and the same.

About the breed nor the tortoise, nor the 3-color color is not said, this applies only to the color of the fur and no more. But the cat is not of any breed can be 3-colored.

Attractive color can occur in animals of these breeds:

There are tri-colored cats or no? Can be, however, because of the genetic dependence of the color of the coat of the chromosomes responsible for gender, in most cases 3-color color is the cat, not the cat.

Thus, the statement about the fact that 3-color coat can only be in the female not quite true, although there is some basis. Just a 3-colored cats are lucky to see a few.

The fact that the genome of the basic colors of cats (black and red) is located in a single locus on the X chromosome (in a certain place), existing in both males and females. The cat, the set XX, so she may have a black, red and tortoiseshell (plus even white). The cat set XY, so it may have red or black color.

Dependency can be depicted as:

The gene for black color will be denoted by the letter B, and red – O. One of the options inheritance tortoiseshell color will be as follows: 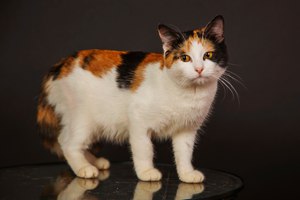 So, the kittens are male in this variation got the color of the mother. The same thing will happen with the offspring of the “black buck” and “red female”. That is probably the appearance of the light red kittens and tortoiseshell cats. Thus, genes in the X chromosome, you cannot “consolidate” in the Y chromosome, and transmitted to son from mom.

Almost always tri-color cats, not cats, because the only X chromosome determines the color of the coat and only females have two X chromosomes. Given the fact that cats have only one X chromosome, it is almost impossible to coat color like, dark and orange at the same time.

There is one exception to this genetic rule: if, due to “errors of nature” the kittens will receive a set of sex chromosomes XXY, only in this case, the cat will be 3-colored or tortoiseshell.

These unique seals are obtained are sterile due to abnormalities related to the presence of 2 X chromosomes, I have an extra one chromosome in the genetic set. In simple words tricolored cats can’t procreate and pass their color on to offspring.

Of the known mammals, only cats and Syrian hamsters have the orange gene, which is associated with gender and affect the color of the fur.

Clone will not work

Modern scientists can’t clone a tri-color cat. The reason is that to preserve the same color of the fur when cloning a 3-color cat is not possible. Put forward the theory that this is due to the inactivation of X chromosomes, randomly affecting one of the X-chromosomes. Since all known female mammals with two X chromosomes, a phenomenon can produce in the future a significant impact on cloning.

In most countries believe that three-colored cat brings the family their owners happiness and success. In America, these cats are animals called money. In Tokyo tortoiseshell cat – maneki neko – the “beckoning” people to buy lottery tickets. Due to its rarity tricolor cats are in special honor of the Japanese fishermen, they believe that the ship, on Board of which there is a cat shipwreck not terrible. In the past such an animal could be sold on the vessel fishermen a lot of money. They say that it is practiced today.

There is a sign that if the house came tortoiseshell cat, so soon to the wedding. There is also a superstition that if three-colored cat, or any other face washes a paw, she calls the house guests, but if putgivelse lying on your eyes, then wait for new clothes. Happy to wait, if the tri-color cat sneezes while sitting next to the bride putting on her outfit – so the animal predicts that bride a happy family life.

So, tri-colored cats is revered both in the East and the West. And in both parts of the world it is believed that these animals bring good luck, health, wealth and wish-fulfilment.

3 Comments on “The uniqueness of tri-color cats. Signs about them”