The Burmese is in the top five most famous breeds in the world. It is famous for its gorgeous, silky hair, friendliness and sociability. Pets surprise of their owners, as well, and high intelligence. 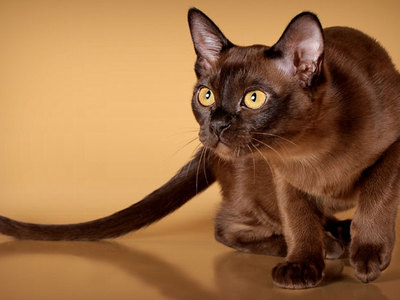 Thanks to his loyal and mild character, the Burmese captured the hearts of many animal lovers.

The Burmese breed of cats originated in Burma, located in East Asia. These animals are revered in ancient times, dwelt in the temples and was equated with deity.

In the nineteenth century, the Burmese cat was introduced into Europe, under the guise of “Siamese dark.” Joseph Thompson brought a representative of the breed on the territory of America in 1930, where he conducted crossing and selection kittens with a dark color. In the future, there’s a new breed of chocolate color. Eight years later, the breeder could register the Burmese as a separate breed.

By 1948, the Burmese has spread to Europe, where breeders have made changes in the coloring of animals, adding the “red gene”. Through their work, there was individuals with unusual color with a reddish hue, and, later, cream and tortoiseshell. Multiple mating has started to erase the significant features of the breed. Breeders in America didn’t want to admit changes in the breed, so European breeders adopted its standard for the Burmese cat.

Thus, the breed was divided into two types: 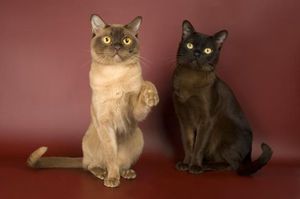 Burmese American species have more rounded muzzle. The ears of individuals of small size and rounded at the ends. The distance between them is slightly larger than the European counterpart.

The European Burmese has the form of a triangular muzzle, a narrower shape. The long ears of the animals and planted closer than other Burmese. Paws cats are also longer and thinner.

Cat of the Burmese breed has a small, but sturdy, muscular body with broad chest and straight back. Legs smooth, the tail is thin, tapering to a fine point. The head is small, with medium size ears, which are located far enough from each other, wide cheekbones. Eyes can be yellow-green or honey-yellow tints.

Their coat has no undercoat, so the touch it is very soft and smooth. In winter the coat becomes darker in color, and lighter in the summer. With its graceful and elegant form, Burma can reach ten pounds in weight.

Standard requirements that must be met by the Burmese, the American Association of cat lovers.

They include the following characteristics:

Do not pass certification for purebred individuals with clearly visible stripes, spots and other deviations in color, with the malocclusion and properly formed tail, with wrong color legs, ears and nose.

The color of Burmese cats

Black hair Burmese cats under the influence of the gene has a brownish color.

Among the most well-known colours of animals classified into the following types:

With a combination of several colors is an unusual tortoiseshell coat. There is a sign that the cat with the colors brings to their masters happiness.

A description of the nature of the breed

Burmese cats are very active, sociable, love to play. They get along well and interact with other Pets, even dogs. Pets friendly to children and happy to play with them. Fervently and curiosity make these cats are like puppies, they also love a lot of the owners and infinitely devoted to them.

His energy keeps Burma and more adult. The animal is very sensitive to the mood of the people and not impose them my full attention. These cats are not sensitive, not prone to aggression, the creation of conflict and rancor. A high level of intelligence allows you to train your pet various tricks. With such a character, the cat will be easy to learn the rules and regulations in the family, besides the Burmese are very clean.

Care and maintenance of Burmese cats

Any purebred animal requires certain steps to care and maintenance. Before moving a pet into the home should be removed from the zone of access, crumbling and breakable objects, household chemicals. Windows is better to block a mosquito net to avoid the loss of them a kitten. Required favorite things, you also need to purchase in advance.

This includes the following items:

You need to constantly maintain the cleanliness of the habitat of the cat, to monitor its health and regularly visit the veterinarian.

Burmese patiently and kindly endure all the treatments, so caring for them will not be easy.

For adults typical two meals a day, youngsters eat up to three times a day. Portions of high quality canned and dry food professional are calculated based on the age, mass, pet, and instructions on product packaging. Natural food includes high-quality foods rich in protein: boiled meat without fat, seafood, chicken, sea fish in small quantities. You can also give pet the yolk of the eggs and boiled liver. As a Supplement must contain minerals and vitamins.

Products that do not give to animals: 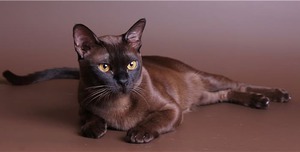 To prevent disease-causing parasites must, twice a year, to give your pet anthelmintic drugs.

With proper nutrition, a cat to old age will retain its gracefulness, slenderness and excellent appearance.

Common diseases of the breed

Specimens of the Burmese breed is not prone to frequent illnesses, but sometimes genetic factors make themselves felt. ENT area and the eye is the most vulnerable place for representatives of the breed. Specific treatment is prescribed by a veterinarian.

Hypokalemia manifests in the early signs of weakness and fatigue. This requires the introduction of ions of potassium. Gangliosides GM2 is a hereditary disease that affects the nervous system. The first symptoms arise at the age of 3-4 months, manifesting itself in the form of lameness, paralysis and ataxia. This disease is not treated, death is inevitable.

Catteries Burmese breeds in the CIS

Certified nurseries where you can purchase the cat of the Burmese breed in the territory of the Russian Federation and Ukraine represented by the following firms:

Wanting to get a kitten, it is necessary to determine the floor, coloring eye color. The acquisition for the purpose of Commerce requires compliance with the breed and the availability of the achievements of individuals in competitive competitions. Kittens in the cattery must be vaccinated, healthy, potty trained over 3 months. The purchase contract is issued with multiple detailed duties.

Correct care and maintenance will allow you to raise a pet that will delight the whole family and will become a devoted friend to their masters.

2 Comments on “Characteristic of the breed and a description of the nature, the Burmese”