If you have bicycle parts, additional spare parts from other motor vehicles or a car, simple tools, any craftsman can create your own economical and safe bicycle snowmobile.

In 2005, home-made vehicles were allowed to register. But only with the conditions that the transport meets state standards. Self-created transport passes certification if it meets all technical requirements. If some indicator of technical characteristics is violated, then home-made vehicles will not be registered in the traffic police.

For home-made equipment, there are limitations that can improve its quality, reliability of use, increase the service life. There are restrictions on the size of vehicles. There are requirements for the steering system, engine operation, light devices.

Requirements for home-made equipment do not limit the freedom of the designer’s creativity, but set as their goal:

Bike is a good transport for sports and walking. But here’s the bad news – in winter, cycling turns into overcoming obstacles. On the path of the cyclist there are snowdrifts, ice, a slippery road. This article will tell you how to get out of a difficult situation, or simply put, to make a bike ride yourself.

How to make a do-it-yourself snowmobile bike

For a long time, cyclists ponder how to remake a bicycle into a snowmobile so that it can be used as intended in the summer again. So that the bike has the opportunity to transform into a snowmobile and vice versa. To make it is up to everyone. 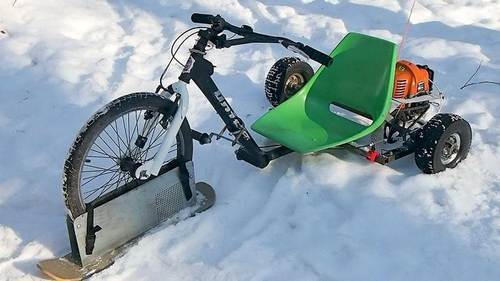 Do-it-yourself design has the following advantages:

What can I take from a bike

To make a snowmobile bike at home, you will need almost all the details of the bike – a frame, fork, seat. It is best to make a snowmobile from a mountain or other bicycle, in which the frame is made of titanium, aluminum, stainless steel – light and durable, having several speeds. As an engine, it is better to install a power unit from a motorcycle on a snowmobile because it is light, but has great power and good speed.

A self-made snowmobile is capable of speeds up to 30-50 km / h on a flat road. A snowmobile obtained from a bicycle can carry only one person weighing up to 80-100 kg and take a small load with him. In the manufacture of a snowmobile, only strong and durable parts are used.

The chainsaw engine has great power, so it is widely used in various alterations, including when a bicycle is remade into a snowmobile. The engine mounted on the bike rides a distance of up to 15 km and does not use much fuel.

A home-made design with a chainsaw engine has these advantages:

On a slippery or covered with loose snow road, the assembled bicycle snowmobile will skid. To increase the grip of the wheels with the road, it is better to use large diameter cameras. Cameras from KAMAZ are suitable for a home-made device – this will ensure good stability of the snowmobile bike. The rubber from the truck is wide, less falls into the snow. It is better to buy cameras in special stores or special equipment sales markets.

Use used cameras only after checking for tears, cracks, or other damage. To avoid an emergency.

Before starting work, calculations of all design parameters are done, draw a diagram of a snowmobile on a sheet of paper, prepare all the details and tools:

Masters have established empirically that for good work and stability of a snowmobile it is better to use pipes with a diameter of 40 mm, and profiles – 25×25 mm, with a wall thickness of 2 mm.

Assembling the front of the snowmobile

Getting started is best done by replacing the front wheel with ski to reduce friction with snow. It is not difficult to make skis with your own hands.

To improve the quality of work of the structure, it is recommended to make skis made of duralumin or chipboard.

After all the operations have been completed, the ski is already mounted on the bicycle – it moves vertically, which means that the descent or ascent is performed at any angle like in a bicycle.

Work begins with the dismantling of the rear wheel. Then wheels made by oneself are installed. The installation of wheels with low pressure is recommended – they are elastic, have a small mass, do not press on the ground. Wheels with large cameras have good qualities – increased cross-country ability and efficiency. If car chambers are filled with polystyrene foam, this will save them from sticking snow, dirt, ice. The design of the chassis and rear-wheel drive is simple, does not cause difficulties in the independent manufacture of the vehicle.

Unlike conventional snowmobiles, the shaft in a homemade snowmobile is an integral part. Both rear wheels are driving. Their disadvantage is that they have low maneuverability. But it is smoothed out by other technical characteristics.

There are several principles for making tires yourself:

The safety and quality of movement will depend on the parameters of the power traction of the vehicle. Snowmobiles have a speed not exceeding 50 km / h – this is a good speed for this type of structure. Such a device weighs a little, the motor power is high – it will easily overcome snow obstacles, not slip on an icy road. The design can be modified to carry passengers.

The installation of the engine on a snowmobile is carried out on the arcs of the bicycle behind the seat. This principle allows you to avoid burns, so its location will not interfere with the legs.

It is not forbidden to install the motor in the center of the frame, but subject to the presence of the upper skin. Masters advise to put the motor with the switching foot in the middle of the frame, and the engine that switches the speeds should be placed behind.


It is better to fix the engine with two welded plates and a channel on the bicycle frame, so that the sprocket on the motor is above the rear wheel drive sprocket. To properly weld the drive parts, it is best to calculate everything in place. The final step in mounting the drive is to install the circuit. After it, a gas tank is attached, which is installed closer to the motor. All engine control parts are assembled in the design. For a comfortable ride on a makeshift vehicle, a durable seat is installed.

The assembly conditions are as follows: