Leader Alpha 200 is a rare Russian snowmobile in Russia equipped with Chinese spare parts. The technique can be used for a quiet walk in nature. The maximum speed is about 45 km / h. More dial does not work due to a sluggish box and power unit. The motor has weak thrust. If you go with a passenger and additional cargo, then in speed the device loses up to 35 km / h – no more. When lifting in a loaded state, it turns off. And if you get stuck, then there’s no point in gasping. Then you need to hope for the support of people. It consumes a little gasoline per hundred kilometers, it meets the conditions of Russia – it starts up excellently at – 20 degrees. The power unit is noisy when the speed limiter is triggered.

Russian snowmobile Lider 200 is made in the city of Izhevsk. It is an almost complete copy of the popular Dingo T150 car, it will differ in some modifications. The device is adapted to the Russian climate, including the northern regions. Automobile plant specialists produced a balanced model, on the basis of which the platform from the tow leader. 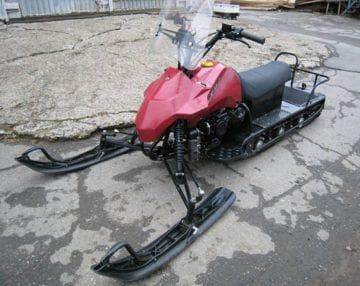 Features of a complete set

Changed and updated hood, plastic and chassis. External features: a large caterpillar and two skis, giving the Leader 200 maneuverability in areas with dense forest. In such places, it fits well even into sharp turns and easily changes the trajectory of movement.

You can refuel the vehicle with gasoline with an octane rating of 92. Stop the engine while refueling. Refuel only with a fully cooled power unit. We recommend using a funnel with a mesh larger than 150 mm for this procedure, excluding the ingress of fuel to the muffler, unit.

The 200 model caterpillar is longer and wider, the Leader’s cross-country ability has become better. But compared to Dingo, the equipment is not collapsible, which may cause transportation problems.

The advantage of the Leader Alpha 200 model is the motor, which is endowed with good traction performance. This provides confident acceleration to the highest speed. The Leader 200 is equipped with a reverse gear to increase maneuverability, controllability and ensure the safety of cornering.

Before you buy a snowmobile leader alpha model 200, it is recommended to see the technical specifications:

In Leader Alpha 200, the function of the handle of the steering wheel with heating, designed for 2 positions, has been improved. Systems for emergency shutdown and start of the propulsion system are provided. The inclusion is carried out using a non-automatic starter. And in addition, you can use an electronic starter that runs on battery power (it needs to be installed separately).

The GY6-150 made in China is responsible for the work of the Leader-Alpha 200. In fact, this unit is similar to the engine from Honda.

For reference: the range of engines includes 2 power plants that were used in the 80s on light scooters GY6. Later, Honda did not dare to produce obsolete power units. But later, the Koreans and the Chinese together were able to master the production of new engines in China. Entrepreneurs became interested in promising components from Japan, due to the affordable price and the ability to repair these engines, although they had an old foundation. The manufacturer Honda has completed its equipment with these units. Gradually, the engine switched to imported Dingo 150, and then it became part of the domestic Leader-Alpha 200.

There are several of them:

The ignition system lock is located on the right side of the instrument panel on the fuel tank plastic. There are 2 positions of the lock: “Off”, “On”. The first position means that the circuit is unlocked and the key can be removed from the lock, and the second signals a lock – the engine can be turned on and the key cannot be removed.

Recipe bait boat for carp with their hands at home

Pay attention to the device components and indicators:

A fuel valve with sump is located under the gas tank. It has fixed positions: “ON” – the standard position during the work of the Leader 200. Fuel enters the carburetor through the fuel valve; “OFF” – faucet in the off position, in which gasoline does not pour into the carburetor equipment.

There are several modes of operation:

The controls for the right handle include the following items:

Attention! Before riding, you should check the quality of the throttle lever. If it sticks, it is better to refuse trips until the fault is fixed. Driving with a broken coil is dangerous.

The unit has a digital instrument panel with the controls and operational characteristics displayed on it:

The socket for connecting external 12V products is located on the panel behind the gas tank. The total network current is 5 A. The highest total power is 60 watts.

Attention! The socket for connecting external devices is suitable for low-current devices. It can not be used for devices with a power above 60 W and a current of more than 5 A.

Transport has an automatic transmission – variator. The transmission control lever is located on the right side of the device. It switches to forward or reverse, and also includes a neutral gear.

Reversing is activated only after the unit stops. It is forbidden to include in the process of movement – this leads to a breakdown of the transmission. Reverse is used only on a flat surface.

Be careful! Reverse develops high speed. When driving, you cannot translate the transmission mode lever to the “N” position – this leads to transmission failure.

The average cost of a 200 model snowmobile can be compared to the previous model. Therefore, we recommend that you find out about the price of Leader-Alpha 150. In the Russian market, it is 141 thousand rubles. A supported model costs around 120 thousand rubles.