In addition to the variator with a belt, according to the regulations, it is necessary to check the condition of the caterpillar and its tension, its relaxation is characterized by dull noises when riding a snowmobile. To tension the belt, lift the rear of the vehicle, determine the clearance between the rail and the track support. Normally, it is 50 mm. At the track rollers, loosen the mounting bolts and locknuts. The more sagging, the stronger the clamping bolts. When the desired tension is achieved, lock the roller with locknuts. This process is for two rollers. 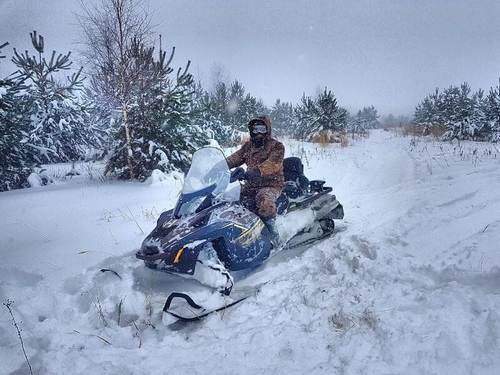 The situation with the wear of the guides along which the tracks move is like overheating of the engine: the parts are erased if you move along the highway, ice for a long time. To solve the problem, you need to find snow cover to cool the braces and reduce friction.

The wear of the variator belt on a snowmobile can be calculated according to certain signs: the difficulty of developing maximum speed, whistling, starting from a place at high speeds. If there is at least one symptom, change the belt after a preliminary inspection.

For the high-quality work of any equipment, it is necessary to carefully monitor the condition of the parts, namely, to carry out tuning and inspection in accordance with the regulations, to check the reliability of each mount, the operation of the engine and fuel system. Of particular importance in proper operation is the inspection of the snowmobile variator. The duration of the transport service depends on its work. Stable operation is possible only with the correct adjustment.

How to remove the part belt: first pull out the protection, make a disc drive in the driven pulley. To replace the variator belt, you need to do the same.

The procedure for adjusting the driven variator Safari on a snowmobile Buran:

Dilute the cones and insert the snowmobile variator belt to replace and adjust, then tap on a block or hammer. The gap between the two elements should be 1 mm.

The snowmobile variator is an automatic stepless transmission of a V-belt type. It contains the master and slave pulleys. The device adjusts the gear ratio in 2 parameters: engine speed and resistance. Regarding the combination of these parameters, the gear ratio is automatically set during the movement of the vehicle. And also the driving pulley carries out the operation of the clutch – when the engine speed is reduced to less than 2200 rpm, the engine shaft and the reverse device are disconnected.

The main purpose of the variator is a smooth change in the rotational speed of the gearbox shaft, which is the follower. The second role is the protection of the gearbox and the crankshaft of the motor with uneven loads on the running gear.

Which drive on the snowmobile variator Taiga leading

The drive pulley is mounted on the crankshaft of the snowmobile, and it moves with it at the same angular speed. The slave is connected to the input shaft of the gearbox and rotates at different speeds – minimum or maximum.

To fully understand which drive on a Taiga drive is the drive for a snowmobile safari, look at the drive characteristics of the drive, identified by the following elements: spring stiffness, shape, weight of levers. The change in the gear ratio is realized through compression and expansion of the pulleys. The snowmobile’s drive belt rotates around the variable sizes of all of them. Centrifugal force compresses the flanges of the drive pulley of the variator.

Setting up and adjusting the driving variator of a snowmobile

Adjustment process: set size B according to the table for the belt of the Ruben variator 33x14x1120La. Select B = 30 mm with a tolerance of + 1.5 mm. The adjustment is carried out by a washer 8, which is placed between the case of the variator and its shaft, and it can be carried out by lining the washers, which are used to adjust the driven variators between two parts – the cover and the cone body.

How to remove the drive variator on a snowmobile

You will need tools: wrenches, screwdriver, grease. Remove 6 bolts and remove cover. Hold the last 2 bolts while carefully pulling out the spring. Find the hole for the gate, if it is not visible, then drown the last disk.

Insert the spacer and lock the crankshaft from the gear. Having installed the gate in the hole of the shaft, unscrew the screw and remove the variator. For high-quality work, provide preventive maintenance, every 6 thousand kilometers you need to check the liners, and lubricate the rod under the sleeve every 3 thousand. The grease must not penetrate on the surface of disks that are conical in shape. The freewheel interval should not exceed 1 mm, and the gap between the liner and the guide ribs should be a maximum of 1.5 mm. For lubrication use Litol-24, Tsiatim-20.

How to replace the variator belt on a snowmobile

Place the snowmobile on a flat surface, install a hand brake to protect the drive disc from scrolling. Lock the driven pulley by holding the brake disc pads. Open the hood, remove the belt cover. After removal, the pulley will be visible.

Attention! When working, use gloves to protect hands from damage.

After parking, before starting the movement you need to “shake off” the caterpillar: grasp the rear yoke and raise the snowmobile, then sharply lower it. A frozen track will keep the variator and belt intact.