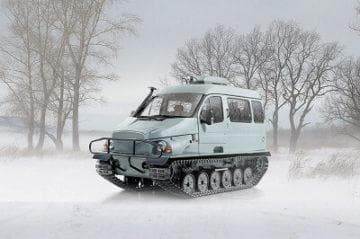 The history of the creation of the Beaver snow and swamp vehicle dates back to Soviet times. At that time, all-terrain vehicles were created mainly for the military. The first predecessor of the machine can be considered the GT-S crawler tractor. It was intended for transporting personnel, evacuating the wounded, towing trailers up to two tons and gun mounts, as well as for other army needs in the Far North.

The snow-and-swamp vehicle “Beaver” is a domestic all-terrain vehicle that can be used both for work and for hunting and fishing. A fairly simple design allows you to effectively navigate both through swamps and on highway routes.

Designers claim this all-terrain vehicle as an amphibian. However, its seaworthiness is very low. Due to the poor tightness of the body, water can enter the engine compartment, fuel and transmission. In addition, as tests have shown, even on an insignificant wave, the GAZ 3409 Beaver snow and swamp vehicle can lose stability, give a roll and sink.

The designers sacrificed such “seaworthiness” as such an important factor as the carrying capacity of an all-terrain vehicle. For example, for similar purely land models, it is quite large, for the same GT-S and GT-SM it was 1000 kilograms with the possibility of towing a trailer of up to two tons, their weight is not much different from GAZ 3409. And in Beaver it is only 600 kilograms, this is lower than that of its tracked counterparts, and the mass of the towed trailer is much less.

The exterior and interior design are borrowed from the prototype – the Sobol car. Here you can feel the influence of the classic Soviet automobile school GAZ. A cool hood, turning into a wide windshield, gives a good overview in the front, and the headlights provide good visibility even at night. The all-terrain vehicle is equipped with rear-view mirrors. The control is carried out according to the type of caterpillar tractor using levers located to the left and right of the seat, as well as pedals and gearshift lever.

Movement afloat is performed using caterpillars with switching them to the maximum speed . Such a scheme provides a satisfactory speed and controllability sufficient for crossing water barriers up to 30-40 meters wide. When crossing large spaces, it is advisable to install an additional outboard motor, however, it is also worth remembering the insufficient reliability of the all-terrain vehicle afloat.

Of the positive qualities of the all-terrain vehicle, one can note the high speed of movement on the highway . Not many cross-country vehicles are able to move along the highway at a speed of 60 km / h, declared by the manufacturers. This eliminates the need to use a trailer when towing an all-terrain vehicle, allows you to get your own power and immediately go to rough terrain.

This property allows the use of an all-terrain vehicle in the Ministry of Emergencies, medical services, forest and fish conservation services, allowing you to get to remote areas and provide assistance where it is needed. The versatility that makes the car not only suitable for hunting and fishing, but also for everyday driving on roads, the possibility of garageless storage, the ability to operate both in severe frost and at high temperatures, in high altitude conditions make the car a convenient transport where there is no expensive or need to move out of them.

Powerplant of the all-terrain vehicle GAZ-3409

The engine of the all-terrain vehicle is diesel, Cummins ISF 2.8. The engine will soon be replaced by Huadong ISF 2.8, which is a complete analogue. Engine displacement – 2.8 liters.

Power is 130 horsepower. This is a pretty decent indicator for off-road special vehicles. Such power is the key to a confident set of speed, the passage of difficult sections from acceleration, the passage of slippery soils. In combination with a caterpillar mover, this allows you to keep the declared elevation angle of 35 degrees even in deep snow or in rain, which most of all-terrain vehicles cannot boast of.

The high engine torque – 285 Nm also gives good cross-country performance. This allows, with minimal loss of efficiency, to convert it directly to torque on the drive shafts of the machine. The rotation range is from 3800 to 1600 revolutions. Such a fork allows you to realize not only automotive or cross-country needs, but also be used for tractors or other complex machines that require compliance with a certain speed.

The key characteristic for the modern consumer is the fuel consumption of an all-terrain vehicle. It is 30 liters per 100 km on the highway. The indicator, I must say, is very high. Its closest competitor from Japan from Isuzu, Ohara, is about one and a half to two times smaller with the same characteristics.

However, for the average Russian consumer of all-terrain vehicles, oddly enough, this is not a big problem, despite the high prices for fuel in Russia. By the way, the tank capacity is 185 liters, this is enough to overcome a very significant distance, even on impassable roads.

Features of the chassis of the machine

The chassis of the GAZ 3409 snow and swamp vehicle is tracked. It is represented by two tracks with six track rollers, two leading and two guides. Track rollers have a torsion bar arrangement with telescopic shock absorbers. This provides good comfort in the cabin and a smooth ride, gives the all-terrain vehicle high ability to climb various, even large obstacles.

Oddly enough, the rear circuit of the drive rollers was chosen , although both the controls and the engine are located in front. Torque is transmitted from the front through the driveshaft, in the back in the lower compartment under the passenger compartment there is a transfer case and a friction clutch, as well as two fuel tanks.

All-terrain vehicle tracks are wide enough. They are made of metal in the form of tracks with hooks for rollers, and on the outside are protected by wide rubber pads. Their width is such that, when fully loaded, they provide a sufficiently low pressure on the ground – 0.165 kg. This allows Beaver to overcome even loose snowdrifts. However, tracked vehicles have no problems with this due to the properties of the tracked mover – if necessary, it can crawl over them even on the belly. That is why the Beaver will be a great choice for those who decide to travel through the snowdrifts.

All-terrain vehicle gearbox, from “Sable”, there are five forward gears and one rear. All transmission compartments and the engine are equipped with special sound-absorbing pads, so that the noise during movement in the Beaver cabin is almost inaudible. Turn left and right with the help of full or partial blocking of one of the tracks using the friction mechanism.

Overview of the GAZ-3409 Beaver

The salon is made in the spirit of the classic Russian automotive industry. In the front part there is a dashboard, which is almost completely made in the spirit of the Sable car. It has numerous glove compartments, appliances, several CD-ROM drives as well as speakers. There is even a steering column, but here it has no connection with the controls. The front seats are soft, adjustable.

At the rear is a passenger compartment. There are two benches running along the sides. The finish is minimalistic, with corrugated metal sheets and aluminum corners. Sex – from the same material. The side parts with windows to the top of the body are finished with soft material. It is possible to install a headlamp with a headlight drive on the ceiling using a convenient lever.

The salon is quite spacious and bright, side windows occupy a significant area. Landing is carried out through the side doors, which are equipped with convenient thresholds-notches. Also in the passenger compartment, you can sit through the back door.

It is an “ideological” predecessor; it has few common constructive solutions with Beaver. It began to be produced back in Soviet times. It is not an amphibian, it has a caterpillar mover, a slightly larger mass and a large carrying capacity. It is still available, there are options for an all-terrain ambulance, a fire all-terrain vehicle, and a derrick. Designed for ten passenger seats.

Modern modification 34039 with similar characteristics, but already having a number of modern features. The undercarriage is borrowed from 34039, but the upper part here is from the ekranoplan – a modern ship that soars above water during movement. Differs in greater ergonomics.
GAZ 3351 “Elk” two-link tracked all-terrain vehicle. Thanks to the original design, it is able to easily overcome “difficult” climbs, areas littered with a large number of boulders and trees. It consists of two sections, front and rear, each of which has its own pair of tracks. Caterpillars give him the ability to move on asphalt, like Beaver.

An improved version of the “Elk”. Able to carry more cargo, more passengers. It is also a two-link amphibious tracked all-terrain vehicle.

The price of the Beaver snow and swamp vehicle can very, very different depending on the year of release and the desire to sell. The new is sold for three and a half million. Second-hand – from 300,000 to two to three million. Nevertheless, if you can buy a snow and swamp vehicle GAZ 3409 “Beaver” for a million, then hardly anyone will buy it for two or three.

It should be noted that when buying a car, the manufacturer gives him a guarantee and a certain service. Most consumers of this type of transport are in Siberia, the Far North and the Far East. Having bought a used car, a person located in Moscow will be very puzzled by its transportation, and is also unlikely to be able to inspect it personally, and even all the available offers. At the same time, the new car can be delivered in full to the consumer, and its price will be comparable to a new business or luxury car.