During the ride, malfunctions may occur that are caused by wear and tear, improper adjustment and maintenance.

With their quick elimination, further dangerous consequences for the device will be eliminated and normal operation is guaranteed.

If the starter runs on the snowmobile, but the engine axis does not rotate, then there may be the following causes of the malfunction: nicks on the gear teeth, lack of engagement, slipping of the freewheel. Eliminate nicks by refilling damaged teeth or replacing worn parts. If the coupling stalls, then it must be repaired in the workshop.

A popular snowmobile with two tracks and ski is an indispensable tool in the household and for hobbies. Buran is highly praised by hunters, fishers, and people who live and work in harsh regions. The device is suitable for trips through the forest, in addition to household purposes, it is often used in various activities, ski training. 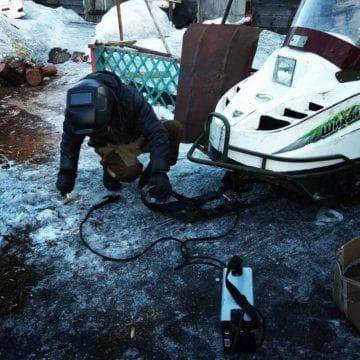 Thoroughly the design of the device has not changed for more than 40 years, but the manufacturer adapted it to modern requirements. The advantages are obvious: the machine is unpretentious, for a long time serves its owner.

There are features of the Buran snowmobile running gear: a small frame and a special design: “1 ski with 2 tracks” make the device a “snow bike”, which does not require much driving skill in deep snow, the machine maneuvers easily in the forest.

The vehicle has a modified hood appearance and installation pattern: the lid leans back, providing instant access to any node under the hood. To increase the convenience, the snowmobile is equipped with a modern seat with a removable backrest for passengers. The hood is made of plastic produced by injection molding: it gives resistance to environmental influences – strong impact, does not crack during frost.

Features of the device:

Every detail has been created and implemented taking into account the main goal – safe use by customers.

Attention! Observe safety precautions. When buying a new snowmobile, it is recommended that you consult your dealer for driving and maintenance advice. The quality of this unit is ensured with regular maintenance and repair by service professionals.

The device and operation of components of Buran

Those who want to buy this car often have questions about the construction of the Russian snowmobile Buran.

It uses the following components:

Before starting work, it is recommended to read the instruction manual, to study in detail the design of the running gear of the Snowmobile snowmobile and the principle of operation of the units and each machine system.

A two-stroke, two-cylinder carburetor power unit of forced air cooling is mounted on the snowmobile device. The device has a loop crank chamber purge. Familiarize yourself with the components in the drawing (Fig. 1).

The figure shows the details of the power unit device, about which it was described above. 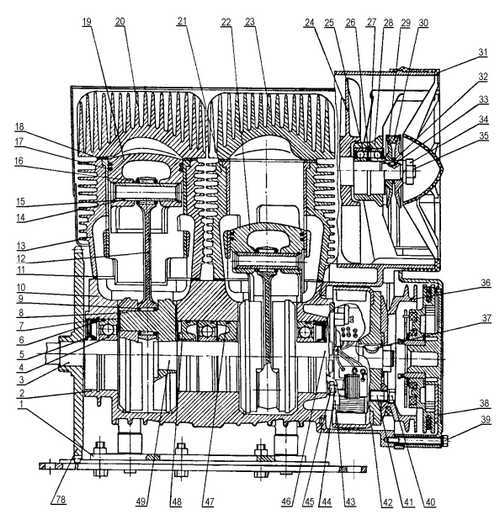 Attention! When you turn on the power unit, you sometimes need to check the quality of the fan belt tension. If it is weak, then the belt slipping effect at high speeds is possible, its stratification from heating. If the tension is strong, the impeller bearings break. If grease enters the belt, it may be destroyed. Do not allow this and replace the part in time.

The Buran engine is equipped with a mechanical device, in addition to the Buran 4T, 4TD, on other models an electric starter is installed. Manual mounted on the fan case with 4 fans. A starter pulley with ratchet elements is located in the hull. The return spring is made spiral, its ends are curved. The outer end of the spring is fixed to the cast indentation of the pulley, the inner end is attached to the protrusion.

For reference: if the manual starter fails, there is the possibility of an emergency start of the motor. Carry out it according to instructions of the operation manual, subsection 3.3.

Appointments of other components designed for the operation of the motor and its control:

The motor is mounted to the base with 4 bolts. To adjust the distance between the variator pulleys, rings are installed.

Fig. 1a – Suspension of the power unit Buran 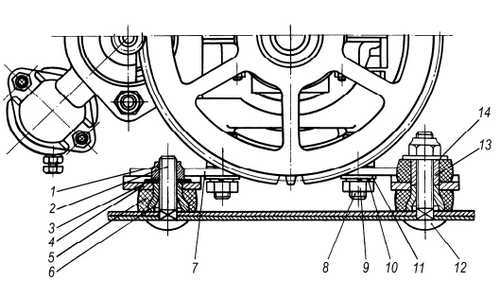 On the Buran frame, an engine with an engine mount is fixed at 4 points. The elastic suspension reduces the transmission of vibration, a functioning motor to the frame, and the shocks that appear during movement.

Minnow on the Rudd

The transmission of the running gear of the Buran snowmobile consists of two elements: a V-belt type of the variator and a chain-type reverse box. The variator (Fig. 2) is a V-belt drive with automatic change in the functional properties of the pulleys (main and driven) through a centrifugal regulator when changing the speed of the motor and cam clutch when changing the resistance to movement of the apparatus.

The main parts of the variator: a driving friction wheel with a rim (pulley) with a centrifugal regulator, which is mounted on the axis of the motor, and driven with a cam clutch on the head shaft of the reverse box, as well as a belt.

The last part of the driven pulley is held on the axis from the rotation by the key 2. During the operation of the variator, the 5 PF liners move along the top of the PD screw. The spring is between two parts – the coupling half and the PD, and it has a preliminary preload and a twist of 120 degrees. The split ring (PK) 28, which is installed on the axis by the spring ring 29, is a restrictive part, namely it stops the movement of the PD to the ND and is simultaneously an emphasis for a stationary spring ring (PC) 29 mounted on the axis, and a stop for the ND mounted on the shaft with a key 23, a washer (W) 26, a lock 25, a bolt 24. Between parts 28 and 21 there are adjusting rings 27 to obtain the desired size of the driven pulley. There are 3 threaded holes for dismantling the ID. 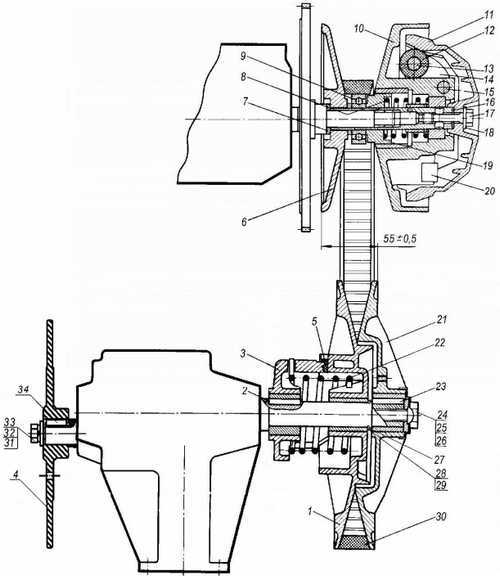 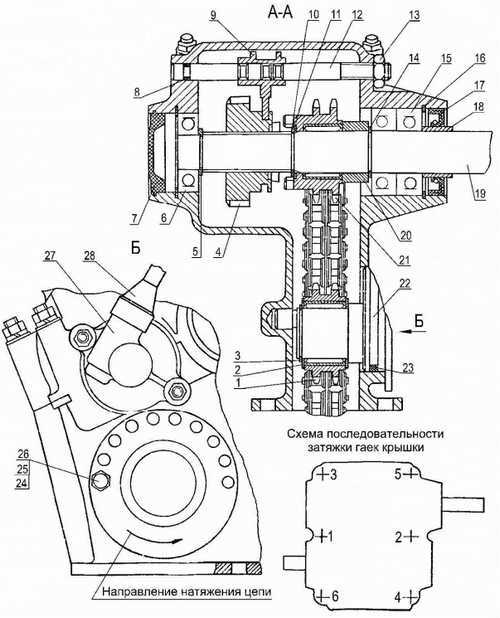 The reverse box (CR) of the snowmobile is designed to transmit torque from the main shaft to the axes of the main track sprockets, to move backward and to disconnect the motor from the chassis.

The box (Fig. 3a) includes the shafts: the drive shaft, for starting the reverse, the gear and chain transmission, which includes the forward and reverse gears, as well as the follower, the chain tensioning mechanism and the drive chain (98 links in total).

The control of the control gear is carried out manually, that is, with a drive that consists of a shift handle and a rod connecting the handle with the mechanism lever.

Consists of caterpillar and ski. We will analyze their structure in more detail:

Fig. 4 – The leading axis of the tracks 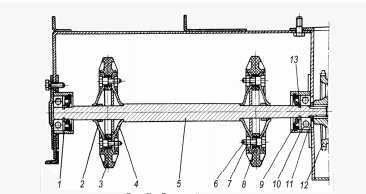 The driving axis (Fig. 4) is located in front of the machine frame and includes a steel hollow shaft 5 with attached hubs 4, 2 and sprockets mounted between them 3. Each of them can be attached to the hubs with bolts and nuts. At the ends of the shaft there are bearings 10 and cuffs 9. Between the shaft support and the cuff, the circlip 13. 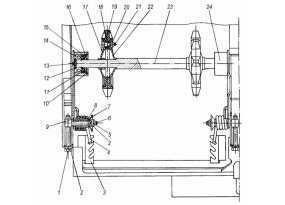 The guide shaft (Fig. 5) contains a full shaft 23 with hubs 22, 17 attached to it, which are placed between the parts of the sprockets 19, bearings and cuffs: the locking ring 12 and the washer 11 are located between the cuff and the bearing.

The axle bearings are lubricated during assembly of the component and during maintenance through an opening in the cheek of the balancer, which is closed by a plug 13. The guide shaft is placed in an important part of the frame on the balancers 24.

The steering column is installed through bushings that perform the action of sliding bearings, to the rack and box brackets with special covers 13. The steering wheel is connected by a cover and bolts to the body of the column.

It is the basis for the installation of each mechanism and assembly.

The main components of the case:

Bearing frame, it is rigid and welded. Frame elements are made of steel sheet. The rigidity of the structure is provided by a frame of corners and pipes. The frame is made of pipes, the fiberglass hood closes the compartment, consisting of a motor and transmission. From the side where the seat is located, the engine is covered by a casing and an instrument panel. Instruments and an element of the apparatus controls are installed on it. The folding seat, designed for 2 seats, is located on the frame on hinges of hinge type.

In the rear half of the frame is a cargo area. At the request of the consumer, Buran brand snowmobiles are additionally equipped with a ski kit.

The arrangement of control devices is shown in fig. 6. 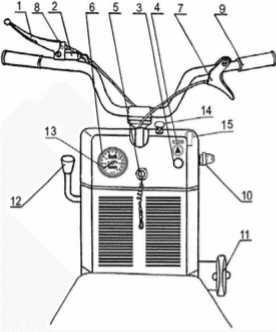 The brake lever is located on the left of the steering wheel. When the lever is pressed, the brake mechanism is activated, and when released, the lever automatically returns to its original state. Slowing down the snowmobile will depend on the quality of the snow cover.

Attention! Fast and frequent braking of a vehicle moving at high speed can cause the brake mechanism to overheat – this leads to a significant decrease in braking performance.

Other controls and mechanisms:

Attention! The brake must be locked when the reverse gear is engaged.

The snowmobile device uses a combined system of electronic equipment (EA) with a voltage of 12 V; one wire for the rear light, for the other EO – two wires.

A non-contact electronic ignition system is created by different manufacturers:

Other elements of electrical equipment:

On some modifications of Buran, a system with an electric unit is installed, which, when receiving information from sensors located on the motor, controls the nozzles and coils of the ignition system.