In total there are several modifications of this snowmobile – Classic, Attack, Lux, Lynx, Leader, Patrol and Sputnik. 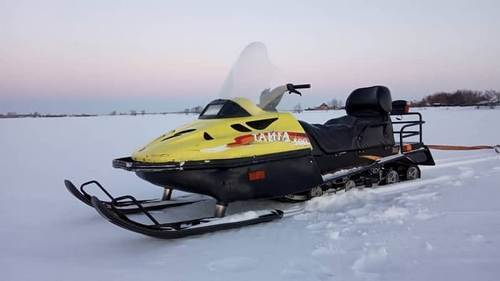 The layout of the snowmobiles is generally identical and differs only in details. All of them have a frame with steps and a seat, a double front ski and synchronous steering for both skis, a windshield with a front metal monocoque chipper.

The seat is designed for two people, only the “Lynx” is designed for one due to the small size. If you wish, you can easily attach a sled to a snowmobile or tow a skier, a fisherman standing in a drag sled at low speed.

The layout of the engine is identical to the motorcycle. The engine, gearbox are under the seat, the gas tank is in front of the driver, the steering wheel with two motorcycle-type grips is located in front, in the monococcus area.

There are also devices with which you can track the condition of the snowmobile, fuel consumption and other parameters.

The transmission is made according to a mixed scheme. First, there is a downshift, then a CVT and behind it a two-speed gearbox. With this control, you can smoothly change the speed, conveniently and reduce the torque when entering a snowdrift and get over it without getting stuck, overcome very steep descents, pits, maintain stability by moving up the slope and make steep bends, traction . There is a reverse gear – this compares it favorably with most foreign models.

“Taiga” is a snowmobile that can give all this for a much lower price than foreign analogues, is in good demand among residents of large cities – Moscow, Yekaterinburg, Ulan-Ude, Astana and other places where there is snow and large winter open spaces, when on a day off you want to rush off quickly for fishing or hunting, rather than slowly trailing on a modest snowmobile with a trailer.

How did the snowmobile “Taiga”

The history of the appearance of Soviet snowmobiles began in 1974. At that time, an aircraft-building military plant was operating in the city of Rybinsk, which, by order of the ministry, was obliged to master the production of goods for people besides what it did for the military industry. The choice of plant director Dergunov fell on snowmobiles.

Having received the order, the design bureau of the plant started to work. As a result, a new snowmobile appeared. We all know him – this is the Buran snowmobile. It had a slightly unusual layout for those years – two leading tracks and one ski control. This technique has passed numerous tests. Even those cars that were produced at the beginning still served until the very end of the USSR and after.

But years passed, technology changed, the market changed. The new market economy brought us foreign snowmobiles, which, although they were not as reliable, maintainable as the Buran, were distinguished by their speed qualities. Foreign cars had a little less maneuverability, they could not overcome the loose snow with such confidence, walk calmly through forest thickets, snowdrifts, overcome covered trees, stones.

Their only ski was well sprung, it gave a good acceleration and ride comfort. That it was important for wealthy people, accustomed to amenities, the trust of which sought all those who produced goods in the 90s. So in 1997, 23 years after the start of the production of snowmobiles, a new snowmobile, Taiga, was launched at the Russian Mechanics enterprise in Rybinsk.

From the previous model, which passed fire, water and copper pipes, the Taiga was distinguished by a well sprung track, relative traction power and the ability to go at high speeds. If before the sleigh for a snowmobile was a necessary accessory, the Taiga was originally designed to overcome snowy spaces without them. 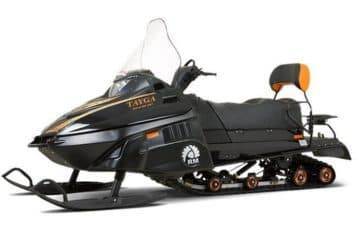 Of course, on such a snowmobile you will not bring firewood or the carcass of the killed elk from the forest, you will not go behind a barrel of diesel fuel for the village power station. But what a Russian doesn’t like to drive fast, as the classic said! It’s dangerous, but nothing can be compared with the spray of snow flying around, and rapidly flying kilometers from the side. Even modern “Buran” began to do according to this scheme.

Most of those who bought this snowmobile are happy with the purchase. It is distinguished by its smooth running, the ability to start even in severe frost, heated seats, handles, a gas valve and other useful little things that are not always found on domestic equipment. Many had previously owned a Buran snowmobile from the same company and noted how stable the two-lane snowmobile with one track is when riding along a slope. For movement on a snowy track, however, this is a controversial factor. With a narrow rut, the caterpillar will not pass into it and can fall over the edges when riding, and the Buran overcomes such a road by holding the only ski in the rut, where it easily fits.

Of the advantages, many also note the high-quality gasoline engine, which consumes not so much fuel. This is largely due to the quality carburetor.

Minuno is an excellent model that allows you to reduce fuel consumption, even when the engine is operating in extreme conditions.

As already mentioned, one caterpillar when moving along a wide track rolled by machines is a weak plus. It will now and then fall into it at one or the other edge and interfere with movement. Also, when riding through the forest, two skis are not a good option. On a snowmobile with one ski, it is almost impossible to enter a tree so as to break the ski – it will be beaten off by the front of the hull. Here it, falling between two skis, when trying to go around it will break them.

There are some people who believe that he is not fast enough. Of course, there are more powerful and high-speed snowmobiles, but Taiga was originally created not as a complete replacement, but as a universal snowmobile, which is capable, however, of showing sufficient speed. Rushing at a speed of 150 km / h on ice hummocks, snowdrifts, under which a snowy pile, a stretched wire, a log or other obstacle can stick out is a suicide. Even on a motorcycle when riding on a relatively flat, non-slippery road, this is not recommended, and even more so for a snowmobile!

Recently, “Taiga” began to come with defects. It happens that the snowmobile does not start or requires adjustment. This is probably due to the general problems of Russian business, the heavy burden of taxes, which reduces the quality of life of people and products of enterprises, their competitiveness. Snowmobiles are buying less and less, taxes for their production are increasing, and in order to stay afloat, the plant is forced to cut costs – use less quality materials, components, hire inexperienced workers.

Fishing for tench on the float rod

Like most domestic equipment, this snowmobile is easy to repair on your own or in the workshop, buy the necessary parts. The address of the warranty workshop can be found when buying from a dealer. There you can carry out non-warranty and post-warranty repairs. It is undesirable to repair a snowmobile somewhere in a car service, as a specialist in repairing a snowmobile has more experience working with them than a specialist in auto repair.

If you are the owner of a garage, you have time for repairs in the summer, you can easily purchase the necessary parts and do everything yourself. You can buy any spare parts right on the manufacturer’s website. They are sorted there in a convenient catalog according to the aggregate principle – engine parts and frames in one block, suspensions, tracks, hood, in others, and so on. You can purchase the item in a store, by mail, or find out where you can do this from your local dealer.