The species of salmon.

If to speak about qualitative parameters of the far Eastern salmons in the first place without a doubt is the Chinook salmon (“Queen” salmon). Next are: coho, Seema, pink, sockeye, and chum salmon. Apart in this series stands Steelhead and its variety of rainbow trout. These species are little studied and are much rarer than others.

Salmon, Atlantic detachment presented mostly well known to us all salmon, which abound in the Barents and the White sea. In Karelia, on the Baltic coast, anglers are catching normal salmon. In inland lakes of these regions (e.g., the basins of Ladoga and Onega) found in lake salmon (clean only inhabitant of the fresh waters). Below the lateral line they have randomly scattered dark spots. These smaller salmon of other species (maximum length is 85-95 cm.), while their noble relatives of some specimens up to five feet and weighing up to ten kilograms. Often in these reservoirs to catch and COSMU — smaller and more nimble salmon. 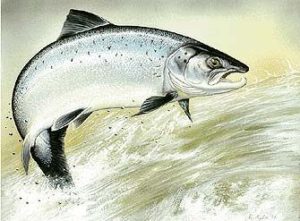 Salmon spawns in may (ten days) when the water temperature is in the range of 5-6 degrees. The incubation period of females lasts for approximately five weeks. But the main feature of salmon is the fact that they retain the capacity for subsequent spawning and rolled back into the sea water. Amazing is the fact that about half of the males in the sea do not leave, remain in fresh water and they put on weight before puberty. As you know, the far East brothers salmon spawn once (4-5 years) and die after spawning in their native stream, where one get, suffering various hardships and dramatically losing weight.

Catch of salmon in all water bodies is about the same. Main methods: spinning and fly fishing. Although, we should mention the float rod (vprovodku), and vertical jigging in winter, donkey, and even the “ships”. But all this does not go in no comparison with a sports fly-fishing and casting good-quality spinning. Salmon — strong, fast and tireless fish. The process of playing the salmon is full of thrills and excitement, especially if the hook sat a specimen.
Very convenient to have the carbon fiber rod. If you catch the wide ducts, using heavy lures, it is best to have a firm two-handed sword with a length of not less than three meters. And if a small rapid rivers with overgrown banks, the way will be the rod not more than 180 cm the Coil is better to use instantaneous (preferably at least two bearings). Necessary durable monofilament of 0.35-0.4 mm (preferably branded, durable and uniform over the entire length). As for lures, there is a full fantasy angler needs to help to choose the most efficient. In the course of and turntables, and spoons, and other species. Surprisingly, the salmon in each river, each lake has their own preferences as to the form and types of lures. So you have to adjust to a particular place, having tried a range of lures. As for flies for fly fishing, very popular a number of “dry” flies. Many fishermen use different sizes of imitation fish, dragonflies, frogs, leeches, etc.

The technique for getting to the spinners the following; makes a throw across the current, drops the spoon to the bottom, a slight pause and a quiet twitching rod (the amplitude is chosen empirically). It was at this point usually follows the bite of salmon. When playing, you have to be prepared for the fact that salmon can jump high out of the water. Salmon need to wear down a skill and not force. This fish has unpredictable final breakthrough. And remember, a landing net should be there and always ready.