Menek (lat. – Brosme brosme) fish, the inhabitant of the seas, a brilliant representative of the cod family, belongs to the genus Brosme.

Menek is the main difference from other cod: the presence of only one dorsal fin. This distinctive feature is very important considering the fact that other members of the family their 2 or 3. Deep sea fish has very small scales, which is often mistakenly believe that it is individuals non-existent. While fish is covered with mucus, which complicates attempts to take her in his arms. Due to almost continuous fin on the back Tusk is not difficult to learn among their relatives. Specimen of this species has quite a large head, like all members cod. Has a light yellow brown tint the color of the body, the belly is white. Antennae, except for one on the chin, the body is moderately retracted. In the form menek like Malvo, but it is more fatty. Length he may meet up to 110 centimeters, and weighing up to 15 pounds. The males rarely reach half the weight of females and number of individuals of the more numerous. 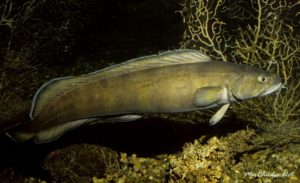 Found in the North Atlantic ocean. In Russia it occurs along the Murmansk coast. Taking into account that menek – fish deep water, it lives on ilovehim bottom with rocky soil. Kept sedentary, large clusters do not form. How to fish Northern, feels good in cold water. This explains the fact that Tusk is rarely seen in warm and muddy waters.

Sexual maturity fish reaches on 5-6 year of life, although the bulk Menkov Matures for fertilization to 8-10 year old. The maximum life span of fish is 20 years. For reproduction menek migrate upstream along the banks. From April to may down to the North coast of Norway to spawn, with the mass spawns in may. Fecundity of the fish depends on its size and up to 2000 eggs. Very beautiful large floating caviar with a reddish-orange oil drop.

The diet of Tusk includes large crustaceans, crabs, shrimp, clams rarely. In addition, this voracious predator, eating herring, eel and other shallow-water fish. Often his food is its own juveniles. If the water exceeds 15 ° C – it becomes dormant and no work for weeks without food. When onset of heat is hammered into the hole and stones, hiding under the driftwood, it can burrow into the silt. 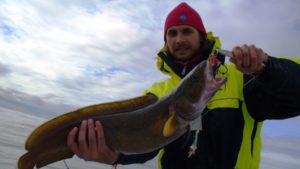 Their shelter, in the form of burrows, menek himself does not, as often presumed. He’s looking for random indentations, or hiding in the snags and roots of the coastal trees. But soon the cold as a fish leaves its shelter and leads a nomadic life, often leaving small places for prey. The lower falls the temperature, the getting hungry appetite Tusk. It is impossible to imagine what number of fish fall to it in the winter, when languid and almost not seeing the fish, it goes almost without difficulties. In search of food menek first uses hearing, smell and touch are very well developed. When danger threatens the fish escape not saved, and tries as far as possible to hide.

Taking into account the fact that the world’s fisheries menek is not significant and is not a fish, which hunt for specifically the fishermen, the catch is carried out in large volumes. Mainly produced by etching together with the common cod and during fishing the other fish to catch using bottom trawls and longlines. The leading countries-manufacturers, which make fishing and the processing of this fish are Iceland, Norway, Sweden and the United States. The season of fishing for Tusk in almost all year round. The largest quantity of catch is expected during spawning. Because of the unfavourable environment in recent years, there is a sharp decrease in the population Tusk.

Menek is an excellent source of vitamin B12, pyridoxine and selenium, which plays an important role in maintaining liver health. And the presence of the proteins in this meat make this cod fish important in the diet for athletes. Has significant amount of omega-3 acids improve metabolism. At relatively regular use of meat of this cod fish can reduce the risk of cardiovascular disease. Recommended for pregnant women and young children because of the presence in the fillets of a sufficient amount of protein. In selling menek can be fresh, dried, salted or ice cream. Has firm flesh with a flavor similar to lobster. Lightly salted fillets can be cooked or used as ingredient for various dishes. Chilled Tusk is often used in diets because it contains no carbohydrates. The representative of the cod – very tasty and high quality fish. Despite the rather large weight that reaches menek, valued in the food industry individuals with weight from 0.8 to 1.3 kilograms.