Fish chum, the photo and description that are present in this article, is one of the main objects of both domestic and foreign fisheries.

The fish are valued for their amazing taste but for the benefits that it brings to our body. Despite its high cost, chum, with strong demand from fans of fish dishes that can be prepared from it dozens, if not hundreds of delicious and nutritious dishes.

Chum salmon belong to the Salmonidae family and inhabit the waters of the Pacific ocean. Her primary residence is the far East. For its popularity is second only to one representative of its family — pink. Keta has an elongated torpedo-like body, and its color varies as they grow older.

Before the fish reaches sexual maturity, its colour dull silvery hue. But as soon as the mating season, the chum salmon changes dramatically. Its color becomes yellow-brown and appear on the body of bright violet or dark crimson stains. The salmon skin becomes thicker, the scales coarse, in the jaws grow large curved teeth. At the time of spawning, the fish acquires a black hue. However, she becomes extremely aggressive and begins to gather in large schools.

Chum refers to a passing fish, as though living in the seas, but during the spawns in freshwater rivers of the Far East, North America and Asia. It spends winter in the North Pacific ocean, which mainly sticks places, not exceeding a depth of ten meters.

Small chum salmon fry feed on zooplankton. Growing up, she switched to crustaceans, molluscs and smaller fish — herring, smelt and others. With the arrival of spring, shoals of salmon diverge according to numerous rivers, and she begins to prepare for spawning. 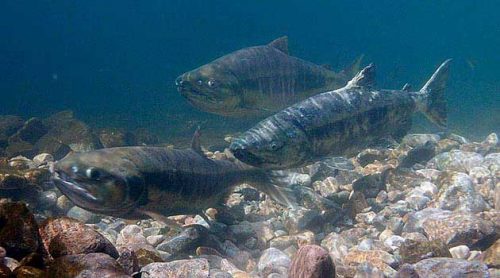 Sexual maturity of the fish is approximately four years. At the time of spawning chum salmon is divided into two types — summer and autumn. Summer chum salmon spawning takes place in August-September and autumn from October to the onset of winter.

Locations for spawning fish chooses the weak over the pebbly bottom, or where there are ice-free in winter, underground keys. Natural instincts always lead Ketu where she was born. While the females are spawning, males are distilled from the clutches of other fish. Chum eggs are large, about seven and a half millimeters in diameter. After spawning the fish die, turning into food for their fry.

The maximum size of chum salmon 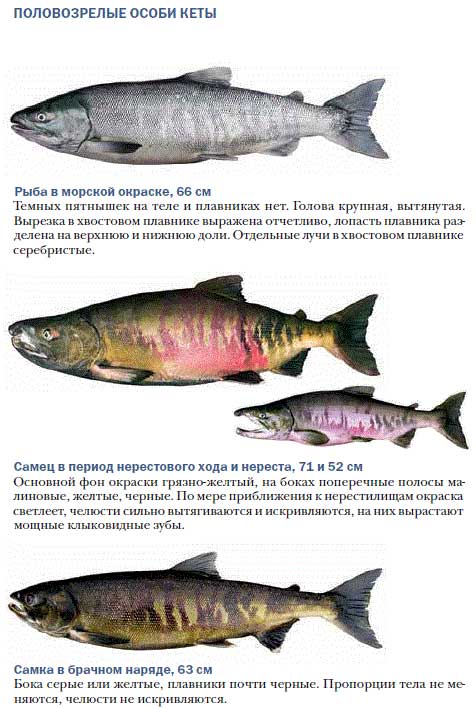 Chum is considered to be a large and massive fish. Some species can reach a meter in length and weigh sixteen pounds.

But these monsters can not meet often. Usually the sizes of chum salmon do not exceed fifty inches, and during spawning, it grows to seventy.

Some residents in Khabarovsk Krai claim that was met during the fishing five-foot giants, but officially this fact is proven yet.

The average life of salmon — about seven years.

Chum and interesting about her

Often unscrupulous sellers trying to sell good-natured customers is dear chum like her more cheap pink. In this case, you should know some of the distinguishing features of chum salmon, not to fall into the trap of cheaters.

First, chum salmon — the fish is large and its weight shall not be less than five kilograms. Second, the salmon has a slight hump, due to which it got its name. In addition, in order not to acquire substandard, you need to pay attention to the fact that fresh fish meat has a pink color, and after pressing the carcass she quickly takes shape.

The price of chum salmon and caviar 1 kg 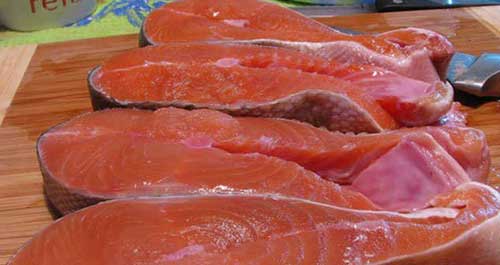 The price of ROE is directly dependent on its packaging. In the plastic boxes it will be significantly higher than in polyethylene bags. The average price per kilogram of caviar is more than 4 000. So 200 grams of salmon caviar chum salmon in pet will be 900 rubles, and the salty caviar-frozen in plastic amount 200 g amount to 810 rubles. Keta itself will cost lovers of fish dishes from 300 rubles per kilogram. The average check in Moscow and Moscow region is 406 rubles per 1 kg. the Price of chum salmon fillet begins 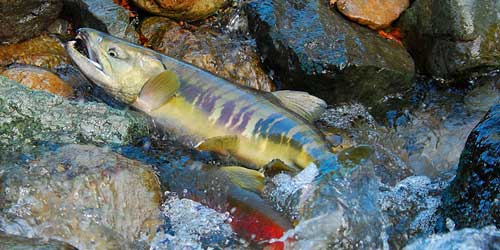 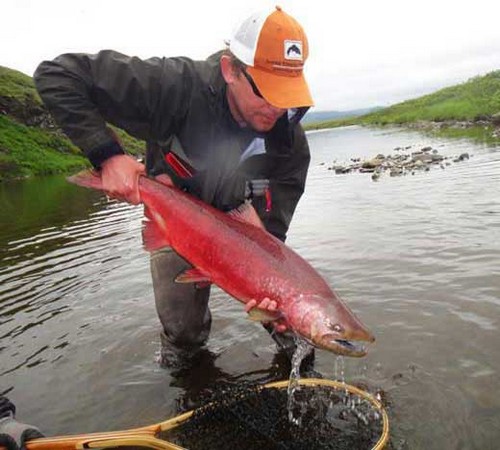