Carp, he common carp (Cyprinus carpio) or river and the wild carp are omnivorous freshwater fish of the family of carp carps squad. Under favorable conditions, reaches 1.2 m and a mass of 45 kg, as evidenced by was world records.

About the longevity of this fish there are different opinions: outstanding naturalists of past centuries argued that Karp refers to the fish-centenarians can live up to 150-200 years, and according to ichthyologists of our age he measured no more than half a century. Differences in views can be attributed, perhaps, to the current environment, so greatly influenced the life span of animals.

In nature carp there are two ecological groups: semi-migratory and residential.

Lifecycle of catadromous species occurs in low salinity waters adjacent to the mouths of the rivers. Only during spawning and wintering they enter rivers, not rising above their lower reaches. Sedentary or residential form of carp, not adapted to the brackish water, inhabits larger 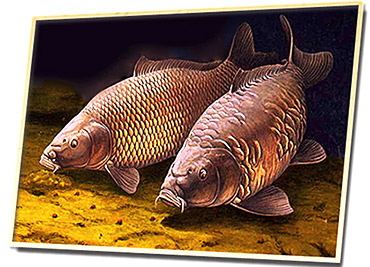 Carp that combines large body size with high culinary qualities of meat, is a valuable fish species both in Russia and abroad. The popularity of common carp in Western Europe and Russia grew to such an extent that it gained a separate area for sport and leisure fishing, called carpfishing.

The natural habitat of the carp

Initially, the natural habitat of wild carp consists of two parts: the reservoirs of the black sea and the Caspian and Aral sea region, inhabited by European carp (Cyprinus carpio) and the territory occupied by the far Eastern rivers and waterways of South-East Asia, which have inhabited his Asian subspecies — the Amur carp (Cyprinus carpio haematopterus).

Subsequently, the European carp has aklimatizirovalis outside of the area where he is from, through connecting water resources moved into other regions, becoming the inhabitants of almost all the major running waters of the Eurasian continent, except the cold rivers of Northern latitudes.

In the process of domestication and breeding of common carp, occurring over several centuries, and as a result of mutations, were cultured pond carp, less demanding to the amount of oxygen in water and, unlike its ancestor, is capable not only to live in confined waters but also bred in them.

The most famous representatives of pond carp are mirror carp and naked. They both differ from each other only scaly layer and may be the progeny of one pair of parents.

The unpretentious nature of the carp together with the high fertility and growth rates are not only allowed man to be introduced this fish in different parts of the world — Eurasia, Australia, North America and Japan, but also became the reason of ascribing it to the invasive species that threaten the diversity of the fish fauna of certain regions of the planet.

Structure and colouring of a carp

Carp or carp river — amazingly beautiful fish. Closely adjacent to each other a large Golden scales, darker on the back and bleached in the lower part, do not leave a single free area in the extended body of an animal, densely covering it and protecting it from damage.

The tailplane is very well developed and different from the other purple-gray fin of a bright brown color.
A special feature of the exterior of the carp are four small barbels, arranged in pairs on the upper lip at the corners of 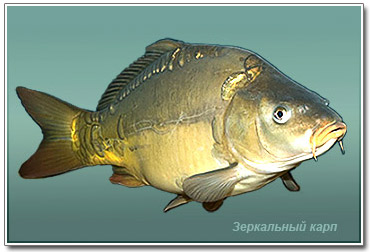 his big semi-mouth. According to him, it can be easily distinguished from the similar fish – silver and gold carp.

Available from the carp, like all cyprinid fish, the pharyngeal teeth are especially massive. These teeth, he frays not only hard food, but very solid shells of bivalves and shells of crayfish.

Spawning carp and the pond carp


The sexual maturity at river and pond carp comes on the fourth and sometimes third year of life, females usually Mature earlier males.
Waking up from a long winter torpor, which continues from late autumn to the beginning of freeze-up, carp exit the pits and begin to feed, gradually increasing the rate of consumption of food.

With the warming water and stabilize its temperature at 18 -20 °C Mature individuals spawn. In Central Russia it occurs in the middle or end of may and coincides, according to national signs, with the flowering of wheat in southern latitudes a little early.

The whole spawning period takes 30 to 45 days, during which the producers one by one, in age order, eggs.
To be the first in the “ceremony” of procreation is available to young females spawning for the first time, and complete the “procession” the largest specimens have accumulated in this matter sufficient experience. 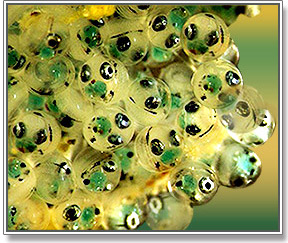 Despite the fact that the carp is considered one of the most prolific species of freshwater fish, the reproductive capacities of producers — an indicator is an individual. He curled as age, size, health and genetics of the individual and many other indicators, for which many members of the carp population in his entire life did not manage to leave offspring.

Spawning group one female male 2-3 portions, occurring in 3-4 divided doses, for which the total number is delayed from 50 up to 1,200,000 eggs. The greenish eggs, beaten and thrown away in the plant substrate and adhered to him, 10-12 days larvae appear. After a couple of days they swim and eat independently, and until then live at the expense of yolk sack that they inherited from the contents of the eggs.

The habits of the carp — carp

The habits of wild carp living in large rivers differ from the behavior of individuals inhabiting small rivers, lakes and reservoirs. He doesn’t like fast water, so never found in the middle reaches and the upper reaches of mountain rivers, avoid the rocky bottom and the proximity of large carnivores such as catfish and pike, usually sheltering in zakoryazhennyh waters.

Prefers muddy bottom. Is the environment of development of larvae of various insects, including mosquito-Chironomidae, which our hero has a special sympathy, Il attracts the carp, as the inexhaustible source of his favorite food. Pulling his mouth proboscis, he sucks food organisms, along with benthic sediment, which then spits out through the Gill openings. The process of finding food and its separation is accompanied by a Muti-poles rising to the surface of the reservoir together with air bubbles issuing the presence of our character experienced eye. 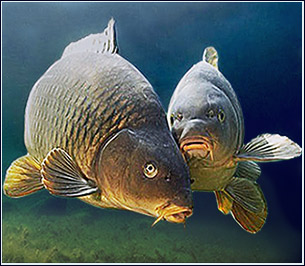 In the millennial struggle for their existence, the fish learned to accurately predict atmospheric phenomena. Fleeing from disasters, they are at the slightest sign of bad weather, go down and hide in the shelters, refusing at this time is fed.

The air pressure changes that fish feel swimming bladder, affects their behavior. When it is lower in bad weather and bad weather carp slipping into the pit, and warm Sunny days — it feeds in shallow water, approaching the shore.

Unfavorable conditions for catching carp is considered to be the Northern and North-Eastern wind, carrying the cold, and with it the lowering of the temperature of the water which the carp as thermophilic species, does not tolerate.