Common name: Walleye, a.k.a. walleyed pike, doré, pike, jackfish, jack, and pickerel (note, however, that the walleye is not a pike, despite the names) 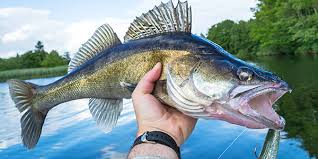 Appearance: Walleye have olive to brown bodies with a yellowish underbelly. Their most distinctive features are their huge, opaque eyes, long pointy teeth, and spiky dorsal fins.

Distribution: Native to Canada and the northern U.S., the walleye has since been introduced to waters throughout the southern U.S. as well. Given a choice, walleye prefer to swim in clear, moving rivers and well-circulated lakes.

Spawning: The spawning migration of walleye begins soon after the ice goes out, at water temperatures of 38-44ºF, ordinarily peaking when water temperatures reach 42-50ºF. Walleyes spawn at night, in depths between 2’ and 6’, over sand or gravel bottoms. The walleye is not a territorial fish at spawning time; they usually broadcast their eggs and exercise no parental care, leaving young to fend for themselves.

Angling: A highly prized game fish, walleye are popular more for their excellent taste than for their fair-to-middling fighting ability. Temperature-wise, walleye tend to be most active between 56ºF and 60ºF, but will still feed anywhere between 32ºF and 84ºF Their distinctive, bulging eyes are extremely well-adapted to the dark, but by the same token are easily irritated by bright light. For this reason, Walleye will hide in the depths or in murky water during the day, moving into the clear shallows only when the sun begins to go down. However, fishermen willing to stay out late (or get out super-early) will find walleye quite responsive to a wide variety of baits and presentations.

Though they’re primarily minnow feeders, leeches, small bullheads, nightcrawlers, and various small plugs are also favorite Walleye baits. A walleye’s bite tends to be rather gentle, calling for light spinning equipment and a delicate touch. Night fishing is by far the best strategy to catch walleye, though even then fishermen must be careful not to scare the fish away with their lamps or excessive noise.

While all this effort may seem a bit much, catching a walleye is its own reward. Along with Great Lakes salmon, walleye is among the tastiest trophies that freshwater fishing has to offer.