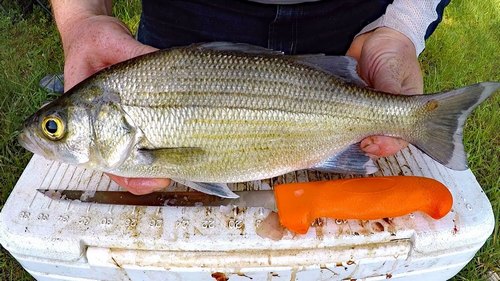 Appearance: White bass resemble a shorter version of striped bass, though they do possess a few distinguishing features. Their bodies are silvery-white, marked by half a dozen or so dark, horizontal lines across the sides, and their dorsal fins are closer together on their generally stockier frames.

Distribution: Native to the Great Lakes, Mississippi River, and nearby waters, white bass have been introduced successfully to most North American lakes and rivers. White bass prefer cool, clear, wide, and deep water, and are found most often in ponds and streams at least 10’ in depth and deeper pools in rivers.

Spawning: White bass spawn between late spring and early summer at temperatures of at least 60ºF. A female will scatter up to a million adhesive eggs over rock, gravel, or vegetation for waiting males to fertilize, which hatch in a few days. White bass eggs are extremely temperature-sensitive and a change of just a few degrees can prevent them from hatching, causing a population drop in the next generation. Their fry school together, feeding on plankton and doing their best to evade predators, reaching their adult size within a year and moving on to small fish as prey.

In hatcheries, white bass have been cross-bred with both striped bass and rock bass, resulting in the “hybrid striper” and “whiterock” hybrids.

Angling: Outside of spawning season, white bass can be found swimming in schools in deep, open water and river pools, feeding on a diet of mostly shad and perch with the occasional crawfish, insect, or white bass fry. White bass move closer to the surface/shore only when temperatures drop at dusk or in the late fall/early spring. Ravenous feeders, constantly on the move in search of prey, white bass are easy for experienced anglers to spot, given the commotion they create when in the midst of a feeding frenzy.

Trolling is the best tactic for these deep-water fish, with a spoon, spinner, crankbait, or plug on ultralight tackle between 15’ and 50’, close to the bottom. Vibrating, spinning, and noise-making lures work well in muddy waters, as do live minnows. Another effective tactic is to cast into a calm section of an otherwise fast-moving river.

White bass can be inconsistent about striking – aggressive one day, wary the next – but once hooked put up a hard fight relative to their size. Given their tendency to school, it’s fairly easy to boat large numbers of white bass after the first is caught. Their tasty meat is another factor that has made white bass popular among anglers.