The vast majority of anglers contemptuous Ersu and consider it a “weed” fish, preventing to produce large and noble fish. This is partly true. Ruff is found everywhere, almost in every body of water where there is at least some fish. He is widely known in the people about him there are a lot of Proverbs and rhymes. The first production of a novice angler is ruff. Veteran fishermen, a business of burbot, are eager to catch the pig because they know that this nimble and “hairy” fish — a favorite delicacy of the night predator, the voracious cod. But on the other hand, it is not a real fisherman’s soup without a dozen brushes, which give the ear an extraordinary flavor and taste. So, in commercial terms ruffs can not be discounted. 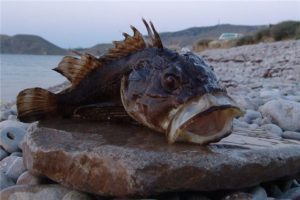 Ruff the closest relative of the perch. By and large, he too, like the perch is a predator. But, not because of their outstanding size, to catch it on live bait only to amuse others. The average length of this fish is between 13 and 15 cm Although there is evidence that in the Ural and West Siberian waters you can catch large ruffs to 17 – 19 cm, But it is still rare, the usual size of a palm of an adult. The most outstanding specimens of ruffe caught and was in the competition, had a length of 21-23 cm

His appearance, ruff may not be so beautiful as a perch, but he has his natural originality. Caught and pulled from the depths, it is important bristling, erect dorsal raises scallop, puts in the prickly gills, beautiful bends the tail toward the head. He has large purple eyes bulging. It their funny goggles, trying to catch a “terror” on the enemy. Paint it ugly, the back is gray-green, with dark spots, the sides are slightly yellow, abdomen light. Poured dark spots on the caudal and dorsal fin.
We should emphasize one more feature of ruff — it is densely covered with mucus, (even more than Lin). Because of this property, he was awarded the unflattering nickname — snotty. If it is wrong to take, then you can get quite painful and long-lasting injections. To take it just behind the Gill cover, slightly pressing them. His mouth will open, and you can without much of a hassle to remove it from the hook. 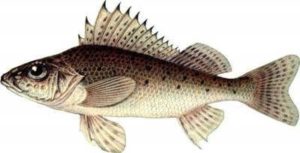 It inhabits all the large and small water bodies. It stays near the bottom. Don’t like too thick silt on the bottom, prefers sandy loam and rocky bottom. In fact, ruff refers to cold-water fish. In the heat of summer descends into a deep pit. Loves in the daytime to hide under rafts, barges, docks and steep banks. Often it can be found at the quays and all kinds of driven piles and abutments of bridges and overpasses. Likes relatively clean water, but able to live in polluted and turbid waters. In winter more common in areas of estuaries and creeks. Kept flocks, and prefers to be in the same area. Just a quick heating of the water or flooding can force him to go to their homes.

Ruff spawns in 2-3 years of age. Females spawn in April-may at a water temperature of 10 degrees, on rocky-sandy bottom. Eggs are laid in deeper places than it does pike and roach.

Ruff. When to catch.

Closer to the fall ruff strays into the pack and began to feed. Bite ruff eagerly. The bait swallows sharply, her deep swallows. If you found at the pond a hole or a ditch, where he settled ruffs, you’ll go home with a good catch. But still the main fishing ruff begins after the ice on the pond. Thousands of fishermen out on a barely fledgling ice to start an exciting fishing of perch, ruffe, perch and pike.

Ruff. What to catch.

Catch ruffs on the float rod. But the best result gives fishing on mormyshka. Moreover, the jig should be small and always dark in color. Since ruff it mostly feeds on water insects and their larvae, catch it must not porridge or rolled oats, and with its favorite food: worm (in the summer), bloodworms (in winter). But you can fish on caddis, larva burdock moth, etc. Experienced fishermen successfully catch ruffs on baitless jigs. Fishing this requires a high skill, experience and knowledge. Besides specific tackle different designs that are avid anglers themselves produce. Therefore, most fans still prefer the conventional methods of fishing. Remember, to cook a delicious soup full of fresh fish it is necessary to have in the cage a dozen ruffs. Without them, the ear will not be so fragrant and delicious!