Even novice spinning players know wobblers as bait, but not everyone heard about popper. In fact, this is the same bait, only performed with some features.

Popper is called an artificial bait, which does not have a shovel at all and works only on the surface of the reservoir, not plunging into the water column. You can catch it in open water at any time of the year, splashes and gurgling during posting can attract the attention of even a deeply standing predator.

The bait is made of high-quality plastic and wood, almost every well-known company has a good line of poppers, and they can differ in different parameters, including the color scheme.

Features of the use of bait

Catching a predator by spinning on ponds makes anglers have an arsenal of diverse lures. Be sure to include a popper among them, and it is better to choose several models at once. Often, with the strongest nibbler, it is this bait that helps to interest the pike and pluck large enough specimens.

Popper has its own application features, among which it is worth highlighting:

Immediately after casting, anglers with experience recommend waiting 5-15 seconds, during this period the bait may drop slightly. This is followed by a sharp jerk and winding of the cord, it was during this period that the popper emerges from the water and then goes along its surface, making gurgling sounds. The predator reacts to this instantly, it seems to him that a frog has fallen into the water, which is a real delicacy. Pike can not refuse such a treat, so its attack should be almost immediately, the main thing is to make a notch in time. 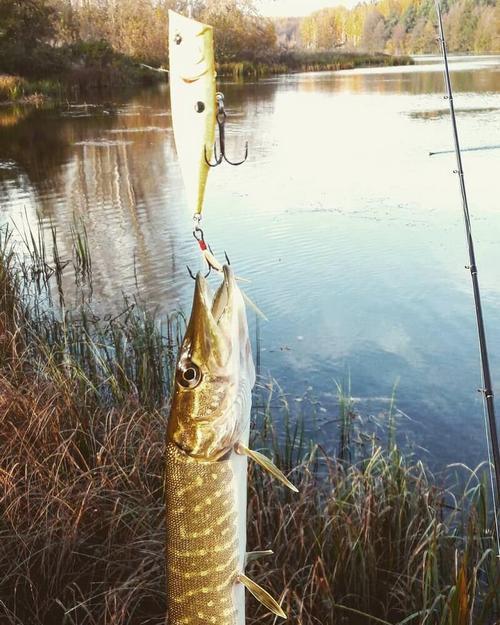 Almost all versions of this bait will be nice to catch, but there are 10 of the best that will be definitely catchy.

The presence of at least several poppers from this list in the box of an avid angler is simply necessary.

The most subtle form for the popper is considered to be a cone-shaped, wide head and thinner at the tail. But other subspecies also catch no worse.

Where and when to apply poppers

For many, fishing for pike on a popper in the fall is the most successful, but this bait works on open water constantly. Experienced fishermen recommend using it both in the heat and in the cool, they use poppers for perch and pike from early spring until the freezing, and the predators respond perfectly to it.

Poppers use both for flow and in still water, while they catch them in different places.

Sometimes, conducted for the sake of entertainment, a popper in deep water helps to catch a trophy pike. A predator rises from the bottom in order to consider what creates such specific sounds. 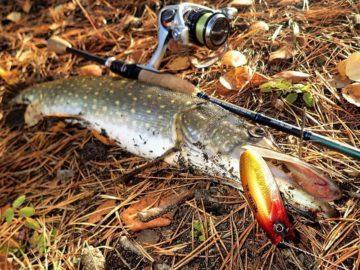 With the flow, it is additionally worth catching places around small islands with a sharp difference in depths, often a toothy predator is there.

Types and varieties of poppers

The catching popper for fishing can be different, only two types of this bait are distinguished.

They will not differ much:

In some cases, baits can differ in shape, they are additionally equipped with propellers, which during posting create an additional noise that attracts pike.

They are also distinguished by size, poppers are from 5 cm to 25 cm long. Large poppers are usually equipped with three tees, they are used to catch trophy specimens weighing 6 kg or more.

Subtleties of fishing by season

How to catch a popper, we know, just master a simple classic wiring. But there are some subtleties of catching a predator with such a bait by season, we will consider them later.

During this period, apply any of the subspecies of poppers. Vegetation has not yet risen from the bottom, there is enough water, fish rises for feeding in the upper layers. It is these factors that significantly reduce the possibilities of bait hooks; they are used both horizontally floating and with the model’s sunken tail.

The colors used are bright, will attract attention:

For this period, it is desirable that the bait has a tee with plumage or with lurex, this will help to obtain as a trophy not only a toothy predator, but also asp or zander.

In the summer, it is better to catch pike on natural-colored baits. The water is already clear, the haze has subsided, the predator has become more careful, and in the heat, bright colors can frighten off a potential trophy.

The best pike poppers for the summer should be of a natural color, and what should they go strictly horizontally, since the algae at the bottom have already fully grown, the water in the reservoirs has fallen, so the risk of hooks increases.

In cloudy weather, you can catch a pike all day, especially if it is drizzling, and on sunny, clear weather popper fishing is carried out on the morning dawn and before sunset. At night, they also catch poppers in the summer, for this they choose models with a fluorescent coating or paint themselves.

Catching pike on a popper in autumn is usually the most successful, and fishing is done both during the period of relative heat and just before freezing. A wide variety of models will work, but it is better to give preference to those that are held parallel to the water.

Of the colors, both acidic and natural ones work. An excellent option would be a model with elements of these two colors. The wiring is standard, but it’s better to take the base and leash thicker, during this period the pike already starts feeding fat for the winter, becomes more aggressive and can easily bite even a thick fishing line.

Pike on popper spinning in different reservoirs to catch at any time of the year, the main thing is that the water is open. It is not difficult to choose a bait, and even a beginner can cope with the wiring after a few tests. That is, a popper will be a great option for a predator bait and should be in the arsenal of every fisherman.

Among a wide variety of lures, fishing for pike on a popper in the fall, as well as in other seasons, is the most effective. With this peculiar bait, fishermen often snatch a trophy predator coming out of their shelter to look at the specific sound made by the fish. We will try to identify the most catchy poppers for pike and find out all the subtleties of this bait.