Lowering the air temperature in the autumn period made the inhabitants of the water bodies more active, as it was in early September and lasted until the middle of the month. Further cooling forces the fish to go from shallow water to deeper sections of rivers and the lake, and pike is no exception.

All the features of the predator’s behavior are explained by the movement of its food supply, it follows roach, crucian carp, bleak, ruffs and other small fish. Now the pike will eat fat before the approaching winter, which means to throw almost any bait that is closer to the near-bottom territory.

The aggressiveness of the predator will also be important, especially if the autumn is early and at the end of October it is already quite cool. This obliges anglers to collect more durable gear using strong components.

Fishing for pike in the autumn is always successful, the main thing is to know some features of the search and be able to pick up bait. Based on the already studied features of the behavior of the predator in this period, it is worthwhile to understand that it is worth taking especially responsible collection of gear.

Where in October experienced fishermen determine where to look for a pike by weather conditions, the cooler the water, the deeper the fish goes. It is increasingly moving away from the coastal brow and practically does not come back here, as a result, in large reservoirs there is nothing to do without a craft. But in this case, the gear is also assembled with its own characteristics.

With such uniforms, fishing is carried out in promising places, and such are:

In warm, slightly windy weather, you can try to catch the middle layers of the water in the pond, small fish often go out there to warm up, and then the pike follows. In small bodies of water, where sufficient depth begins immediately off the coast, you can try to conduct near casts.

In October, pike is characterized by a good appetite, therefore, it is pleased to respond to all the proposed lures. The only feature is the size, small toothy resident of the reservoir will not pay any attention. Depending on the method of fishing, lures can be very diverse.

Various types of artificial bait are used to catch the water area with a spinning blank.

The most catchy among fishers with experience are recognized: 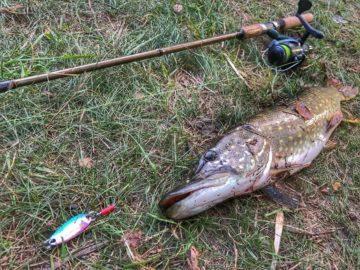 Pike fishing by this method involves the most often use of a wobbler with sufficient depth. It is on an artificial fish that the pike pecks best at this time of year.

Apply a wide variety of models:

An important selection option will be the size of the bait and the depth of immersion. For trolling fishing, options from 80 cm or more are suitable, but the depth is selected depending on the characteristics of the reservoir.

Interesting! With the complete absence of biting, anglers with experience use trolling from a wobbler for trolling, while the most deep-sea model is attached first, but the smallest fish will become the enclosing one.

It is worth remembering that sometimes a predator in a pond can behave very unpredictably, that is, refuse all the baits characteristic of this time of year. What to catch then? What type of bait should I put? In such cases, anglers hold one or two purely “spring” baits in their arsenal, it can be a small silicone or spinner up to number 3. Often it is precisely on such options that the pike rushes almost immediately.

Subtleties of catching pike in October

The autumn period is rich in trophy catches of both a predator and some species of peaceful fish. We have already figured out what to catch a predator on, but how to catch a pike in October so as to always be with a catch, we will try to find out more.

There are a lot of subtleties of catching a trophy pike. Each angler with experience has his own secrets that he is unlikely to want to tell everyone, but there are well-known rules, which we will reveal further:

They got the basics of pike fishing in October, now it is imperative to visit the reservoir and put into practice the advice and recommendations received.

October is considered the most successful month for fishermen, especially if predator fishing is preferred. In October, a pike pecks almost everything and for any type of posting, but there are exceptions to the rules. In order not to return from fishing empty-handed, it is worth exploring some of the subtleties of fishing a predator in mid-autumn.