Experienced fishers know that pike is not very caught in the summer, especially the heat is unbearable for it. As soon as the air temperature rises to +25 and above, the predator goes into pits and thickets, where the thermometer is lower. It is extremely difficult to lure their tenants out of their shelters in the heat, but there are some tricks. 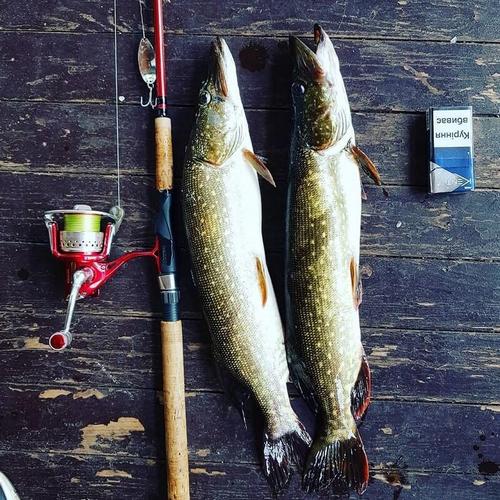 Predators are caught all year round, the best time for catching is considered spring and autumn, but summer fishing for pike can be successful. The key to capturing a trophy is the constant search for a promising place, the frequent change of lures and methods of their posting.

To always be with a catch, experienced anglers advise listening to such features of pike fishing in the summer:

In addition, you need to know where to look for a predator, because such places are often not visible from the coastline or from a boat .

Not all familiar places are considered the most promising; behind the scenes, the subtlety of this or that place can be determined by months.

But do not blindly follow these instructions, you need to look more at the weather, in a cool and rainy summer the pike may not hide at all, but actively hunt in open areas on the river.

Fishing for pike in the summer involves the use of mainly spinning blanks, but their characteristics will depend on how and where fishing will be carried out.

To equip the rod, an inertialess coil is used, the gear ratio on which 5: 1 will be ideal. The size of the spool is chosen in the region of 2000-2500 units, which will be quite enough even when catching a trophy specimen in a pond. For reliability, it is better to put a cord as the basis, for summer fishing, a thickness of up to 0.16 mm is used. More experienced anglers equip 0.12 mm, for beginners it is better to use thicker options.

In June, catching pike on any bait is impossible without using a leash ; during this period, equipment is made from fluorocarbon or steel is put for reliability.

We found out when it is better to catch pike in the summer, but the success of this business is 50% dependent on the choice of bait. In open water, you can try a large number of different options, at least one of them will still be able to interest a toothy predator.

The most catchy are:

They can be used alternately or give preference to this type, but often change the appearance. And which ones to take for capture is desirable to learn in more detail.

Fishing for pike in the summer will give good results if lures are used as bait, while both spinning and wavering will be successful with a predator.

In terms of size, it is better to prefer medium and large, they will be able to better attract attention than small ones.

The most catchy among the spinners are:

Vibrators are also popular, the most proven option are Spinnex spinners, but Mepps makes them an excellent competitor. Separately, I would like to highlight the oscillating baubles of our production, Karelia catches always and everywhere and not only pike.

Castmaster will also be an excellent option for luring a predator from an ambush, this type of bait works almost all year round.

Fishing for pike in June for wobblers will be effective, this artificial bait, when properly wired, simulates a sick fish, which the predator will chase. But it will not be possible to lure each option, you need to know which one is suitable for capture.

In the summer, the pike will respond to a wide variety of colors, you can safely offer it:

In this case, it is desirable to choose those that will hang in the water column during pauses in the wiring. In June, as well as in other summer months, pike will respond well to elongated minnow models, but the Sheds will work no worse during this period.

Silicone baits are considered universal, a predator pecks at them always and everywhere, fishing on a pike in the summer without this bait is simply impossible. Most often, twisters and vibro-tails are used to catch predators, but worms, slugs, crustaceans and artificial insect larvae will attract attention no worse.

In June and August, silicone baits are mounted with an offset hook and a collapsible cargo of cheburashka, this will allow you to catch places in the thickets of water lilies and other vegetation, where the pike stands during this period. The fisherman will not be able to spend the month with the most intense heat without mounting with a jig head. It is a large soldered load that will help silicone to lower to the desired depth and interest the pike there.

The use of snacks more falls in the autumn period, but in August it is already possible to apply this type of fishing. Not everyone knows how to catch a pike on live bait, but this method is considered the simplest.

The capture method is simple, you will need:

A pre-caught live bait is put on a single or double hook and tackle is thrown, it is best to do this at night. Set the blank of the rod or fix the self-discharge on the shore. Bells are often used as a bite signaling device.

Pike pecks on live bait in the cool season, August nights are often issued just like that. So do not neglect this type of fishing.

Fishing for pike in the summer involves the use of different types of bait harnesses, mainly it will depend on weather conditions:

However, these are just generalized tips and tricks. It should be based on weather indicators and the individuality of the reservoir, and it is best to experiment.

Fishermen with experience with a catch are always their secret is to know and practice some of the subtleties of fishing.

Among the most important, there are such:

Now everyone knows how to catch a pike in the summer, which bait is better to use and in what places it is worth looking for it. Persistence and minimal skills will help to lure a toothy predator out of hiding.