What does bream do in winter? The largest individuals are in a state close to anabiosis. In winter, not so much food for bream . And if the big fish starts to move, energy consumption will increase, and there will be nothing to fill it with. But smaller individuals continue to live like in summer. In the northern latitudes long dark nights come, and the fish tries to eat during the day and especially in the evening when the water warms slightly . 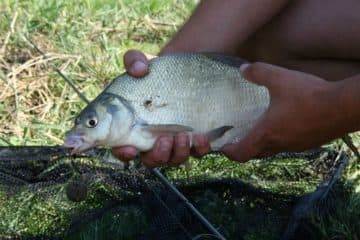 Most fishermen end the fishing season with the beginning of autumn. The study of children begins, the day becomes short, nights become cold. But real fans of fishing do not stop with the arrival of cold weather. Fishing for bream in November is less catching compared to the summer months, but catching fish brings more pleasure.

Search for bream at this time of year should be near the places of its winter parking. These are usually very deep holes with virtually no current. It makes no sense to search for bream in the shallows in winter, because too much energy is spent on holding against the current. However, this fish retains the schooling character of life, as in the summer months. When fishing with bait, you can get on a large flock, hold it up and catch it well, because the size of a flock of bream becomes larger by winter than in summer.

Often, this fish can be mixed up with another one for the winter – gustera. Usually they do not tolerate each other very well, although they are very similar. Gustera has more active habits, feeds in the winter months and can be caught all year round. The bream, it happens, is nailed to flocks of a dense buster, especially a small one, and travels with it.

Food bream to fall becomes more caloric. He prefers larger nozzles and sometimes even starts to fry. Occasionally, it is possible to catch rather large individuals, for some reason, continuing to feed actively, when fishing for burbot, when the bait is a bundle of worms, a piece of fish, or fry. However, this is more a coincidence. Nevertheless, by the autumn the bream is better to catch not on the vegetable attachments, but on animals.

The behavior of this fish is slightly different where warm industrial effluents flow into the reservoir. Usually in this case the fish remains active, and even behaves differently in winter than in another place. The hibernation period in her may not advance, and even in winter you can catch quite decent specimens from the hole. If these drains are also rich in oxygen, then fishing will be like summer.

Efficiency of bait: how to attract bream in November

As you know, in winter, the use of bait is not as effective as in summer. What are the factors involved? First of all, because of the low temperature of the water, molecules that transmit odor over a distance spread over a large area for quite a long time. Bait usually has a pronounced aromatic and taste components, and it immediately becomes less effective as soon as the water temperature drops to 4-5 degrees. It is this temperature that is set on most reservoirs by November.

In the cold season, much more attention should be paid to other senses of the fish – the lateral line, touch, and sight. It is much easier to lure a bream both in winter and in late autumn not with a bait, but with the help of vibrations and playing jigs. This is confirmed by the fact that the bream is caught both on the devil and on the mormyshka, and there are also poklyovki on balance.

If the bait and applied, it should have a large number of living components. And it is alive – the worms and bloodworms in the bait should move under water and create vibrations that attract the fish to the place of fishing. Ice cream and canned marsh in this case will not be as good as alive.

However, it is impossible to completely deny the effectiveness of bait in the winter. Of course, it will not give such a result as in summer, and will not collect all the fish from the area. But if the fish came up, keep it in place, even when there are catches of one or the other fish from the flock, it will help. After all, like in summer, bream is looking for good food objects, where you can find food and feed yourself in cold water. Therefore, if there is prikormka at the bottom, it is able to provide a bite if a flock of bream has approached.

The most effective way to catch bream in November

Fishing from the boat is carried out on the mormyshku. A large “bream” mormyshka has a large hook for mounting an animal nozzle – a worm, one or several, or a large bundle of maggots. You should not shallow bait, because a large piece and mouth rejoices. Especially in winter, when there is little feed at the bottom. Mormyshka designed to work at great depths, from 4 meters or more. Therefore, it has a significant weight of at least six grams.

You can catch the devil, but it’s better with the addition of three maggots on the hooks or the introduction of foam rubber impregnated with flavoring, since the bream is still largely oriented when searching for food for taste and smell, even in winter.

To catch the boat from the boat, which is anchored, is quite difficult. The fact is that the boat will oscillate, regardless of whether it stands on two anchors or on one. The length of the anchor line is great, since the depth of fishing is large, and still it will not be possible to keep the boat still. Mormyshka at the same time will randomly twitch and only scare the fish. It is much easier to catch from a boat that just moves slowly enough. It uses a water parachute, an electric motor or the help of a partner who slowly rows paddles. At the same time, fish are searched with an echo sounder and tapping the bottom with a mouthpiece.

Fishing for feeder and bottom gear

It is best to search for fishing areas that even at this time of the year do not suffer from a lack of heat. It may be shallows, but at a good distance from the coast, as the bream is still shy and will not go to the place where the fisherman is sitting nearby and the feeding trough constantly flops into the water. But at a distance of 30 meters or more, he is not so careful. You can catch at depth, but there the fish react less actively to bait. Good results are obtained by fishing near the confluence of warm industrial effluents, of course, if they are safe enough. In such places, near the bare houses and wastewaters of CHP, the bream can feed all year round, and there is often no ice there.

Of great importance to the success of fishing is the search for fish. Fishing here may differ from the sit-down summer, where the angler sets up the platform and sits on it all day. Here you have to walk along the shore, catch fish in different areas, sit down at different points of catching, constantly explore the bottom and wait for a bite.

In this case, you can use either a small feeder-thimble of a small volume, or even catch it at all without a bait with a sinker. As soon as the fish are found, you can make zakorm in this place and wait for the bite of the schooling fish. If something went wrong, it is worth moving to another place. It is possible that the bite was just an accident and the pack is not here.

With this kind of fishing, like no other time, good casting accuracy and ability to explore the bottom in the course of fishing matters. Catching on a feeder will be very reminiscent of such an old method, like running donkeys, but it is much easier to use it with feeder gear. After all, a quivertip allows you to feel the bottom well, to knock it, and a good cord will be much better to transmit both the bite and the character of the bottom than the fishing line that was used earlier on the donkeod.