Not everyone knows such a burbot, earlier, at the beginning of the last century, this species of freshwater cod mined on an industrial scale. The population has declined sharply and now it is a real trophy for the angler. 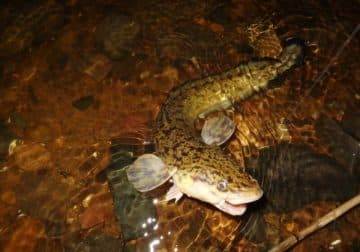 Catching burbot in the summer is a useless undertaking, it does not tolerate heat, so it hides in the depths and is quite problematic to lure him out . But when the temperature of the air and water decreases, he will boldly scour the shoals for food. The best delicacies for the river dweller are:

All these gastronomic preferences are familiar to fishermen, these are the options that are considered the best bait when fishing for burbot on small rivers and on the lake. In the north, a waterworm is used as a delicacy to catch a cod representative, it is washed in advance and placed on a hook in bunches.

Before you prepare tackle for burbot, you should know where to look for it. Experienced anglers are advised to navigate on such features of the river, which will definitely come to the liking of a cod representative:

Burbot mostly prefers bottom areas of the reservoir, which is why it is captured on bottom gear.

How to catch burbot

Catching burbot in the fall on the river can occur in several ways, each choosing the most appropriate look. It will be important to properly equip with quality components so as not to miss the trophy catch. On Vyatka, on Klyazma and on the Neva, experienced fishermen use different gear to catch the cod representative. If the bite of burbot is good, then no matter what tackle is used, it is better in that case to worry about the bait and lure of the place.

The most common equipments for catching a water inhabitant are:

Each of them can bring a good catch, but a large burbot, as practice shows, is best taken on a donkey and zakodkushki.

The freshwater representative of cod is not very cautious; therefore, it is possible to use less delicate components for tooling than for other river inhabitants.

Donka and spinning are applied from the shore, but it is necessary to place the stubs from the boat. But in the autumn, the first two versions of tooling work best.

Considering the habitat of the burbot and knowing its habits, it can be understood that you can safely use a monk or thicker cord, the hooks are also chosen not small, which will suit both live bait and a bunch of worms.

Catching a burbot on a donk involves the use of a rod, its length depends on the water body chosen. The larger the river, the longer the form is chosen. Fishing for burbot on the Volga will require a length of up to 3.9 m, 3-meter-long length is sufficient for small bodies of water. Fishing on the Yenisei is usually carried out with a 3.6 m rod. It is advisable to use forms made of composite materials, they are quite strong and light.

When buying a blank sheet, inspect the rings well; they should be strictly aligned along a single line without shifting. Such a flaw will prevent the line or cord from coming off easily.

Spinning rods are chosen as to which bait will be used. It is better to catch on swayer, this lure most imitates a real fish, which burbls so much love Spinning, respectively, should have a casting of 10 grams, since spinners rarely have less weight. Rod length 2.4-2.7 m, it will catch the necessary water area without problems.

It is necessary to equip the rod with a high-quality reel with a maximum gear ratio, so the fishing line or cord is exhausted more quickly with a notch. On the feeder and bottom fishing rods, it is desirable to put a reel with a spool of 3,000–4,000 in size with good strength indicators, at such a time another, more active river resident may be on the hook.

Spinning equip 2000-3000 coils, the main line or cord which is enough for long casts.

It is not always necessary to need a rod and reel for the poke. Some experienced fishermen prefer to collect a donk for baking on a self-resetting, this is a plastic ring with a jumper in the middle on which the fishing line with hooks is stored. 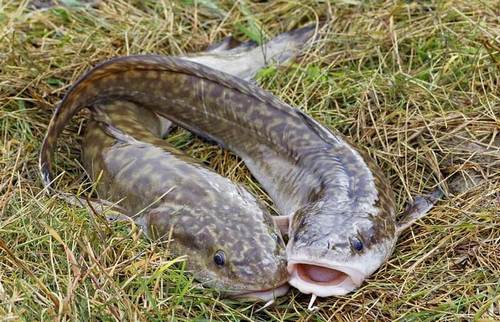 Fishing from a shore from a beach on the advice of experienced fishermen will be successful no matter what the diameter of the fishing line on the reel. Blowing her is different caution, sometimes he can take carelessly thrown bait on a hefty hook and completely absorb it into himself. But too thick diameters should not be used, it is useless.

A monk 0.25-0.35 mm thick is used for tooling, the cord is used an order of magnitude thinner, 0.18-0.22 mm is enough. And it will already be a good supply even if the bait accidentally interests the catfish or another large predator from this reservoir.

For leashes suitable ordinary fishing line, fluorocarbon does not make sense to put. For such purposes, 0.18-0.2 mm thickness is sufficient.

You should not use the cord to form the leashes; it is coarser than the fishing line and will not allow the zhivtsu to move actively.

Bottom tackle on burbot will not be complete without hooks, their choice should be considered carefully. Important selection criteria will be:

The size of the prompt is complicated, it all depends on the bait used. For a bundle of worms, 9-10 numbers according to the national classification are sufficient. On the shrimp, and small minnow you need a live-grain double size 8. The same options are used to equip Zherlits.

Catching bogs on the Yenisei will require the use of larger hooks, they need to be picked up for bait.

It is better to use products with serifs on the reverse side of the forearm, then the bait will not slip off the hook.

Equipment zherlitsa conducted fishing line, the thickness of which should be at least 0.3 mm, its circle wound not much, 10 meters will be quite enough. This is followed by a leash, it is better to use steel, it is stronger and will be able to withstand jerks and other predators.

Fishing for burbot in late autumn involves the use of a variety of baits and baits, experienced fish never go fishing with one species. Lures and bait are used a variety, it all depends on the type of fishing.

Fishing for burbot in October is carried out using spinning spinners. Best of all, the representative of cod reacts to the elongated versions of silver, they most likely mimic a real fish. Lures such as “Atom”, “Goering” are considered the most catchy, and they bite well on the caster.

The weight of the spinners should be sufficient to catch precisely the bottom layers of the reservoir, therefore, to give preference to the best options heavier. The most acceptable weight 10-28 g.

The best bait for catching a burbot feeder is considered to be a worm, besides this, the important point will be bait in the feeder, without it fishing will not take shape. Catching a bout on the feeder is carried out with the obligatory use of feed, but the purchased mixture will not help to lure the predator. Fishermen on the Neva and Klyazma use a homemade version, which is prepared directly on the shore. To get everything needed:

Fish and worms cut in small pieces, mixed with soil in a strong lump. The resulting mixture is packed into the trough without a bottom or thrown without her in the place where the hook is located. 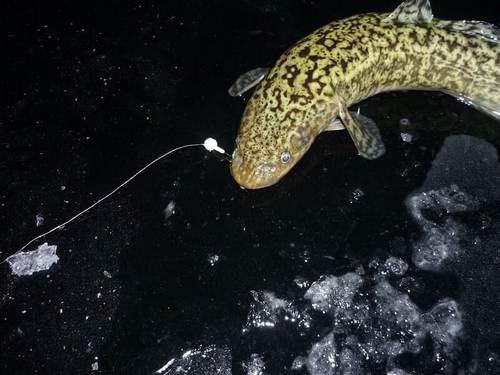 Donka burbot involves the use of animal bait, most often the capture is carried out on live bait. Catching burbot on the Oka in the fall is effective on shrimp, which is pre-boiled. A good option would be worms, bloodworm and maggots are unlikely to attract the attention of the cod representative.

Burbot will never rise behind the proposed bait in the water, so the lures’ wiring passes slowly, without sharp jerks.

The ensemble for burbot is assembled by hand without any problems, the constituent elements are already known. Now the main thing to collect everything correctly. There are two options to collect gear:

Leads desirable to knit to the main through the swivel, this option will help avoid overlaps when casting.

A tackle for spinning is assembled in a standard way, a leash is attached to the main one via a swivel, and a lure is fastened to it through a fastener.

Catching burbot in the fall on the feeder is carried out with this equipment:

In addition to the main components, feeder assembly can be done with a counter fastener, a rocker or just a leash.

When and how to catch burbot on ponds?

Depending on the chosen method of fishing, the capture of burbot is mostly carried out from the coastline. The time for catching different methods will vary, but the places are the same.

The catch of the water area is carried out after sunset, but before dark, so that you can see faded traces of striking. The ideal places are sandbanded shallows and shallow depths with small pebbles off the coast. 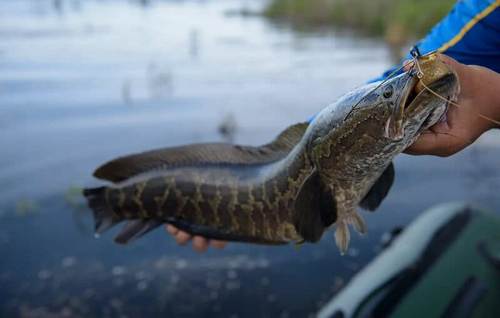 Throw tackle spend around the same time, while it will stand until the morning. Usually several rods are used at once, which are thrown at different distances relative to the shore. So you can capture a large area for fishing, thereby increasing the chances of a trophy instance.

Catching with the feeder is carried out in the same way as with a bite, just before casting into the feeder, freshly prepared bait is stuffed. Periodically it is necessary to check the availability of feed in the feeder and fill again to attract the attention of fish.

It is necessary to increase the amount of feed while weakening the bites, in this way the interest of burbot will increase.

If within an hour after the casting of tackles there was not a single bite and the bait on the hooks is not touched, it is worth changing the chosen fishing spot.

Fishing on the Irtysh burbot in the fall is carried out and vertical baiters, which are most often used for winter fishing. The best option would be pilkera, elongated shape with cut ends. Blading is carried out with side rods from a boat, while the rigging is completely identical to the spinning rod, only the rod is taken shorter.

Fishing for burbot does not stop in winter, it is successfully fished at first light until mid-December, when the codfish begin spawning. Until February, burbot becomes sluggish, almost does not respond to the proposed bait.

In spring, when the temperature of air and water rises, burbot goes to deep pits and does not leave them until mid-autumn.

Burbot is caught only in the cool season, it does not tolerate warm water. To catch a decent option, preferably night fishing burbot, in the daytime, this predator is resting in a secluded place.