Burbot is not known to every angler, many because of inexperience and ignorance often confuse it with catfish, but they are completely different representatives of the ichthyofauna of our water bodies.Catching burbot in the summer is a waste of time, its season starts as soon as the water cools . 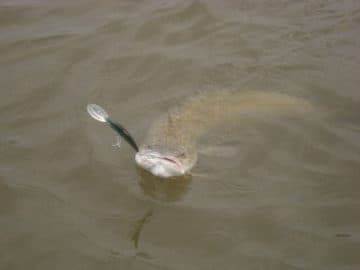 Distinctive features of burbot behavior are:

It should be understood that the representative of cod is a predator, its capture from the shore is carried out on bait of animal origin. Vegetable bait is not to his taste.

Habitat burbot located in the north, the north of the reservoir, the larger the individual will catch.

Burbot can grow to large sizes, but nowadays it’s happiness to catch individuals of 2-3 kg. Wikipedia officially described 18-kilogram burbot, about 1.2 m long. However, in the Urals, according to fishermen, a 34 kg weight trophy was caught. 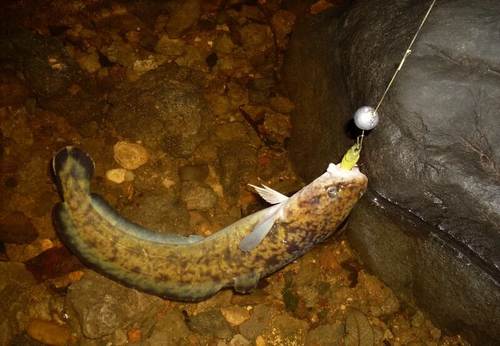 That fishing was successful, you must first study the habits of the trophy and its habitat. Burbot will not live across the channel, he will choose for himself a favorite place with such characteristics:

Fishing for burbot in October on the Oka and other water bodies is primarily a search. Experienced fishermen recommend finding low end trails for a start, fish go in search of food only along a certain route and never change it. It is possible to determine where the burbot will bite and by the presence of whirlpools, these places are attractive for him too.

The calendar of a bite depends largely on weather conditions, the sooner the temperature drops, the sooner the time will come to catch a cod brother. At the first lowering of the temperature regime, biting burbot will be weak, basically it will be necessary to look for it in the shallows, the fish will gradually move to great depths after the potential food from fry and mollusks.

Fishing for bogs on the Volga will differ from catching on water bodies smaller. However, for any reservoir need high-quality equipment.

It is possible to catch burbot in the autumn on a large or medium river by several methods, each of which provides for the use of animal bait. The most common representative cod rydat:

You can try spinning or float gear, but given the active nightlife and some features of swallowing the bait to catch in such ways will be difficult.

Donka can assemble with or without a rod. A great variant of the catch came to us from our grandfathers, all the gear was collected on a round reel, which is called a self-resetting. It is installed on the shore after casting and fixed with a stick. In this state, the catch is all night, in the morning the fisherman checks what he has hooked.

Putting tackle for fishing with burbot in the fall

The best method of catching cod representative in fresh water is feeder gear or bottom. They will be formed approximately in the same way, and the tackle will allow more active fishing for burbot on Irtysh and other rivers.

Tackle for fishing for burbot almost always has the following composition:

So collect deaf equipment, but experienced anglers recommend doing tackle with a sliding load. To do this, through the sinker thread through the base of the gear, and in front of him and after him put a stopper. Next, knit a leash with a hook, this method will help to detect well not only burbot, but also other members of the animal world of the selected reservoir.

More reliable and more common for all fishing burbot in the fall on the donku using fishing rods. Most often for bottom fishing use carp or feeder blanks. Rod choose a strong, it will be necessary when vyvazhivanii trophy after serif.

The most suitable length is 2.4-2.7 m, longer forms are not recommended to be used, it will be problematic to throw a tackle.

It is advisable not to save money, and equip the form with a speedless version with a baytranner. This type of coil will allow you to easily remove not only burbot, but also a large catfish, while maintaining tackle.

Fishing for burbot in late autumn is carried out on coarse tackle, for him it is not a hindrance. As a basis, use thick options monks, ideally suitable 0.4-0.6 mm. If the choice fell on the cord, then its optimum thickness is 0.3-0.34, it is not necessary to install the rope.

It is recommended to use thinner versions as a leash, there will be enough monk about 3 mm thick and a cord 0.20.

When choosing a cord as a basis for collecting any fishing gear, pay attention to its shape. It is better to give preference to round variants, they will not give loops when casting, and if such a one is formed it will be easier to unravel it.

It should be understood that catching burbot on the Volga will require one weight of sinkers, and catching burbot on Kama is completely different. It is based on the selected reservoir and the depths at which it is planned to catch and choose the cargo. General recommendations would be the following:

An important criterion is that the load is perfectly lying at the bottom and not overwhelmed by the flow. On the rivers, gliding options of a flat form are used more often, sometimes with grousers.

Catching a burbot on a donk involves the use of large, single hooks for the most part. Do not be afraid of large sizes, even a small-sized fish has a large mouth, which allows you to swallow large-sized baits along with the corresponding hook.

Catching feeders in the fall is carried out on hooks of 8-12 numbers according to the national classification.

Apply and twins, but their use is not always justified. 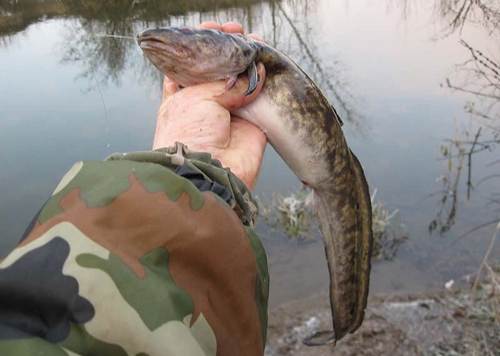 An important point in collecting gear will be the use of quality trifles to connect all parts of the gear. Swivels, clasps, clockwork rings choose only excellent quality and from a trusted manufacturer. It is not worth saving on these little things, sometimes it is a high-quality swivel that will allow to pull out a large individual of burbot or catfish while fishing.

Selecting accessories, you should not dwell on small options, burbot is not afraid of coarse tackle, with zhor it captures everything in its path without fear.

Burbot on the Yenisei and on other rivers perfectly perceives the bait of animal origin, vegetable options will leave it indifferent. So that the Trophy specimen did not pass by, it is advisable to take several types of baits with you, so the cod brother will be interested in it for sure.

The best bait for burbot in October, according to experienced anglers, is:

Catching fish is excellent for shrimp, and minnow is considered a delicacy for him. In most cases, put a few donocs with different baits, bite and determine the preferences of fish.

This method will be successful fishing for burbot on the Volga, but small ponds also do not lag behind. Live fish belongs to the universal bait types for burbot, it works always and everywhere, if a freshwater cod brother lives in a pond.

It is best to use the fish caught in the same body of water as bait.

These three options work exclusively, but sometimes burbim can give preference to only one type and it depends on the reservoir itself.

Catching burbot on the liver

This type of bait is also a great lure cod brother, an important indicator will be the freshness of the product used. If it is slightly odorless, then burbim can bypass it, but it can som.

The ideal option would be to catch chicken liver, this delicacy, he just will not miss.

Liver for fishing must be prepared, it is placed in a bag and a whole piece taken with them for fishing. The strips are cut immediately before baiting on the hook.

It is a good idea to catch a worm in the autumn, while crawling out for it is preferable to a slurry counterpart. For catching is used not one, but several worms at once. There are no more than two crawls to catch the average burbot, and a bunch of dung can contain five.

It is the bundling of bait on the hook that will allow to drive away trifles from the hook, which will also want to feast on the proposed delicacies. Burbot will be able to swallow such a treat without any problems, so you can safely hook several worms at once.

To enhance the bite used bait on burbot in the fall. Find this kind of food in the store does not work, it is usually prepared by yourself. For this purpose, boiled peas, sunflower oilcake, breadcrumbs are used as a basis.

So that he is not scared, chopped bait elements are added to the finished bait. It is necessary to think in advance what will be caught, if on the liver, then in the stern should be present her pieces.

Flavors and attractants can not be added.

When to catch feeder in the fall? 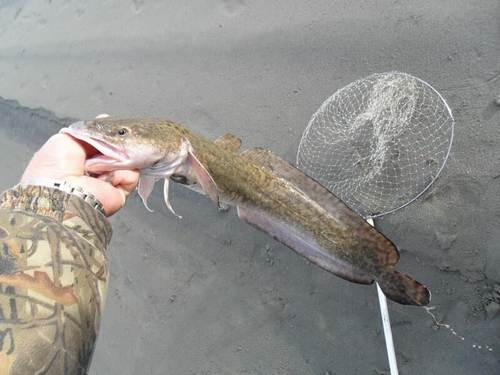 Experienced fishermen know that burb is a night predator, which is why it is better to catch it in the dark. In the light of day, it is almost impossible to catch him; during this period he hides at the bottom of deep pits or in a snag and does not react at all to the proposed bait.

Fishermen come to the reservoir in advance, so that without lanterns they can find the most promising places. In daylight, you can also identify landmarks for re-casting.

Autumn burbat prefers inclement weather, so that in the rain and wind you will definitely not be left without a catch, unless, of course, you risk getting out to the water. Fishing with complete calm, with relatively high thermometer performance is possible, but you should not hope to catch burbot. This is the main explanation of why there are so few hunters for the freshwater cod species.

Often a fire is made to lure on the shore and make a lot of noise.

Catching burbot in the fall on the catch should also be able to, one rod or one donka will not be the key to successful fishing. In order to accurately find the trail in blunt one fisherman on the shore exposes at least 3 rods.

The ideal option would be 5 zakidushek, while casting bait carried out at different distances relative to the coast. This will allow catching immediately a large area and find out where the path is laid for the fish in search of food.

If during the night there was not a single bite, then most likely the place for capture was chosen not entirely successful. The next time it is worth more carefully to choose the place of fishing.

It is difficult to determine the bout of burbot; it simply swallows the bait offered to it, is cut down and waits for a fight. This is where the difficulties begin, if the fisherman senses that the catch is on the hook, it must be taken out of the water quickly and sharply. Otherwise, it will curl up in a ring and grasp the bottom of the body, which will significantly complicate the task.

Fishing in October at the donku is fascinating, the main thing is to choose the right bait, collect strong tackle and responsibly choose the place of capture.