When a predator stands high above the bottom, the balancers work well, but for the most part in March, vertical spinners are in use. Aiming even at a large humpback, they use medium-sized spinners, about 5 cm long. In the game, they are well-planned to the side, with a clear play of their own, giving out sufficient oscillation strength. The spring spinning technique is a cross between the ice and deaf winter, the spinner is 15-30 cm higher, the pause is 4-7 seconds and then the lift again. However, for each vertical line you will need your own characteristic technique, which is selected during fishing.

What unites the game for all perch spinners, and this is an important point – an attempt to give the game the maximum possible repeatability of all cycles – this monotony will appeal not only to a weighty humpback, but also to pike perch, which will be a good complement to by-catch. Largely for this reason, spinners are often used not with a hanging tee, but a “solder” – a single rigidly fixed hook. With it, the spinner works more stable, since a freely suspended tee during planning knocks down the spinner game, hanging one way or the other.

When fishing at shallows and depths, radically different gears are used. In areas up to 1-2 m, the most lightweight fishing rod without a reel is preferable – the fishing line is wound on a reel, and a nod is not put on such a fishing rod, it turns out a sensitive tackle that clearly controls the game of the bait, and even the most accurate bite is difficult to miss.

Glitter on the perch 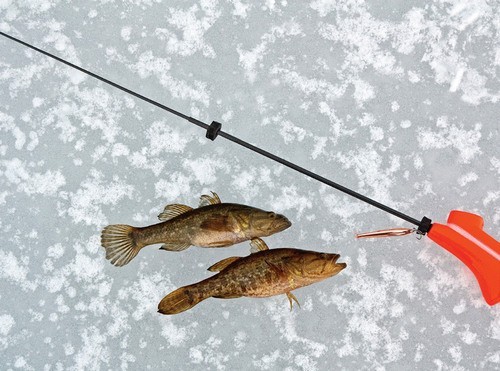 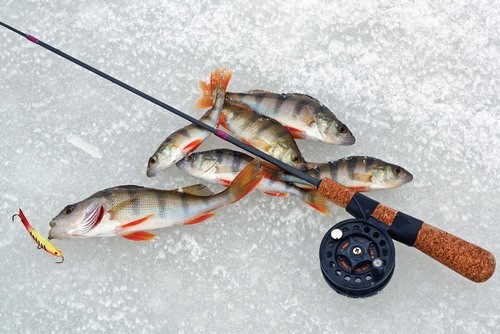 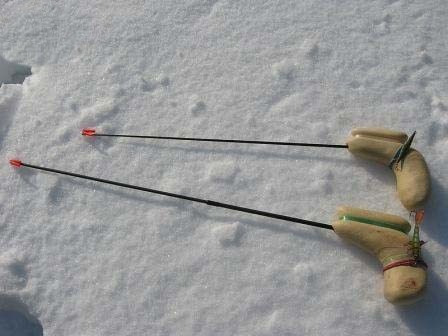 At a depth of 3 m, it is desirable to equip the fishing rod with a nod and inertialess reel. A nod allows you to diversify the game and clearly guards sluggish bites. A reel with a friction brake when fishing with thin fishing lines makes it possible to pull out a pretty decent trophy, with a properly tuned brake. And the inertia behaves perfectly on ice fishing, including during frosts, just try not to throw it in the snow and make sure that it does not get wet. For hunting perch, inexpensive coils according to the Shimanov classification of 500-1000 are suitable.

With the advent of spring, in the short period before the ice melts, when the large perch is activated, it is inexcusable to miss the opportunity to hunt for it with the bait and balancer, since perches of 1 kg in weight are caught in this period, and 300-500 g is a common occurrence.

In promising ones, there are many reservoirs where perch is found, but in the spring, Okushniki prefer small reservoirs, lakes and large ponds created on more or less large rivers, and the artificial reservoir should be flowing. For if the pond is small, shallow, fed by some stream, or even not flowing at all, then you can’t wait for perch activity to open ice, or even freezing will cover, which often happens. Of course, it happens that even on a small pond that was silent on a perch all winter, the zhor suddenly starts on the very last ice, when oxygen with melt water enters the reservoir, for this it is necessary to regularly travel, check different ponds, and without guarantees of success . 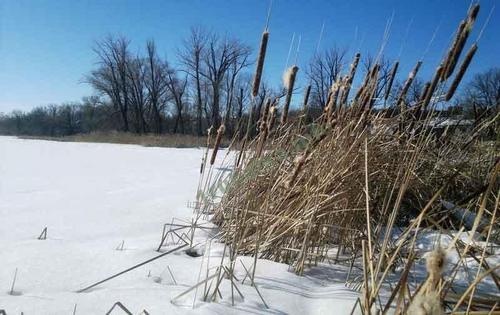 The situation is quite different with large bodies of water, where there are no gaps, and a lot of miscellaneous perch, but it requires a very broad search, preferably collective, and it’s very crowded on the last ice. And some want to hunt for the March humpback in solitude – with a partner or alone. It is advisable to know that in the area of ​​100-150m there is a large striped robber.

There are lakes where fishing pilgrimage is not close at the beginning of spring, because in these places, as a rule, it doesn’t bite especially all winter, and only at the end of the ice season everything starts. There are still many such reservoirs. Each Okushnik has his own cherished places, and few people want to talk about them. It’s obvious that the competition among our brother is growing, and less and less okushnikis boast not only of found places where the perch fishing is stable, but also just information about good catches, starting to “calm down,” and it’s becoming more difficult to draw a thorough picture of the real bite on a specific pond at a certain time of the year – information about many catches is covered in darkness …

But any flowing reservoir where a large perch comes across on the last ice in March is interesting for lure fishing. At the end of winter, there is a certain transitional period, when large perch still adheres to deep, more than 4 meters places with a clean, but silted bottom, stands on the dumps of the same flooded channel, where there is a minimum current flow that maintains an acceptable oxygen regime in the water.

To summarize, the following ponds are interesting:

Soon the activity of these “awakening” humpbacks will increase, going to the stage of racing for fry, which will begin to shift from the depths to shallow places, to the influx of melt water, to the mouths of rivers and streams, the striped ones will follow, and then it is not easy to find them. Will have to go into a broad search for intelligence. And by that time the ice will already tarnish and it will not be safe to walk on it.

For catching perch, the edges of the flooded channel are very promising. In many old reservoirs, the channel becomes washed out, silted and smoothed, but where the bottom is initially hard, for example, clay or rocky and the river was quite deep and winding, there are areas with a pronounced channel, with steep dumps and turns, flooded bushes and snags – promising places for a large humpback (Fig. 1).

In many reservoirs where fishermen choose in the spring, depths of 6 m prevail, and in some places of the flooded channel, specific 8-10 m, which make it very difficult to search for migratory fish. These dumps are caught first of all with an eye on the time of day – a very important point! After all, if the places are unfamiliar, then the first half of the day goes for reconnaissance.

And the peak of the biting of a large perch, according to observations, is the very early morning, and until there are promising points, the train has already left – they missed with a bite. Of course, there are chances of catching the groats in the afternoon, and increase after 16 hours and before sunset, but it happened that they managed to take all the large fish only in the morning.

Experienced okushaniks notice the best places for perch fishing in advance, even in the summer with spinning boat fishing, having measured all the nuances of the bottom topography with an echo sounder. If you go to unfamiliar places, then, of course, two-day fishing is more promising, when the experience of the first day can be used the next day from dawn.

The distance between the holes is made standard, about 8-10 m – somewhere more, somewhere less, depending on the topography of the bottom. And they’re guided by the bite, taking into account an important point: if the perch is not very active today, it’s naughty, then it’s extremely reluctant to move towards the spinner, but it’s worth shifting literally by a meter or two, making a new hole, and a confident grip immediately follows. And often, such minimal movement is much more useful than experiments with different spinners and ways of playing.