A can is a folk tackle that has a very simple device. The very name of her comes, apparently, from the can, which was originally used as a feeder. 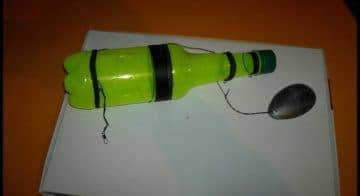 A container was taken from under condensed milk, holes were drilled in it, a tube through which a fishing line was passed in the center. A heavy lead load was attached to the side or bottom of the can. The line passed through the jar, behind the tube there was a stopper attached to it in the form of a metal ring and leashes with hook and nozzle. Most often, bream caught on two or three hooks tied to a common burden to the leashes. The bank itself was filled with porridge, which was washed out by the current or when twitching for a fishing line. If necessary, it could always be filled right on the fishing trip.

The method has much in common with catching on the ring, but in this case, when feeding fish, the feeder is pulled out with it. Noise at the same time is made much more, and the load on the rod falls more serious. However, the can has a number of significant advantages when fishing for bream.

What is good bank and what is bad

The main advantage of such gear is that it is easy to make and it is cheap enough. For her, of course, is used udilnik with a coil. However, this is usually an inexpensive onboard type udilnik, to which there are no requirements for throwing, test and build. In fact, this is just a stick, which is designed to make it easier to get the fish to the boat in the net. The coil is also very inexpensive. This is usually a small diameter inertia reel with a ratchet brake.

But if necessary, even with such a beater, you can throw a distance of up to ten meters. This is quite enough so that the manger does not stand directly under the boat on a sunny day, which the bream may be afraid of, especially in shallow water, and this is the main advantage of this method before catching on the ring.

Another plus is that the jar can be used in standing water. When fishing on the ring in the absence of thrust will be constantly confused tackle. Hooks will go straight to the feeder and cling to it. As a result, it will have to constantly pull out and release the hook. You can throw a jar with your hand or a rod, and the fact that the hook is lying next to the feeder is not a critical situation. Always when biting fish, the feeder and hooks are pulled out. However, on the lake or reservoir it is worth confining only one crochet. When fishing on the river, the bank is equipped with several, like a ring.

The drawbacks of the can appear when catching cautious bream, which is frightened by the throws of a heavy feeder. Usually it is a large fish in a reservoir where it is not so much, and there are much more anglers. For example, the fish can be reached on the ring almost silently, and almost the same tackle is over-stretched and sent back. A bank with noise flops to the bottom, scaring a flock of bream, which are suitable for prikormku.

The second drawback of the can is the need to use a boat when fishing. However, for those who already have it, this is not a hindrance. But those who have not yet acquired a boat have been less fortunate. Catching the can is closed for them. However, in some cases, you can find places where you can catch in this way: pedestrian bridges, moorings, embankments, barges, dams, etc. In addition, bream often likes to stay in such places, as there is shelter from the sun in the heat, and enough food, settled on the bottoms and stilts.

The jar is easy to make yourself. To do this, you need a little money and some tool with fixtures. Rod cans purchased in a fishing shop from the number of cheap spinning type “Crocodile”. Its length is selected from one to one and a half meters. Of course, you can take a longer udilnik. However, often this way the bream is caught together, and the long rod will interfere with the partner.

The coil on the rod can be put inexpensive inertia. Best fit coil type “Stubla”. These coils are a bit taller than the famous “Neva”, and its cheap Chinese counterparts, even if they have high-quality industrial bearings and easier travel, are better balanced. They are suitable for modern reel holders, while the Nevskaya does not stand up well on all of them.

If the cheap analogue of Nevka is chosen, it is worth fearing that such a coil will simply fall apart when snatching a fish or tearing a can from a hook, and the drum of it is made crookedly, it touches the case. In general, it makes no sense to save too much on the coil, it is better to buy a smaller diameter, but a stable average quality. If you really want very cheap, we can recommend high-impact plastic. They will last about a season, but their price is appropriate. But those who want to catch with great comfort and have the means for this, pay attention to the trolling multipliers and rods for trolling. They are perfect for fishing on the bank.

The main line is put quite thick, about 0.4-0.5. There are no special restrictions on the thickness, you can set and millimeter, because the catch is carried out in a plumb or almost plumb. It is passed through a tube in a can, a rubber bump is placed at the end and a ring is attached after it. The fishing line with leashes and hooks or one leash with hook is attached to the ring. Given that the poklevki usually go on the last hook, as well as on the ring, it is better to restrict one hook altogether. The length of the leash in this case, not less than a meter. If you put a few leads, their length is taken half a meter, and they are put through the meter.

Quite often, the fishing line with leashes tied through a rubber shock absorber. This helps when hauling large prey, for example, when a solid bream or carp sits on a hook. However, given the general rudeness of the gear, it is rather a reassurance, and you can catch a jar without any shock absorbers. However, in the southern regions of the bank are frequent bites of catfish in the summer. Therefore, the shock absorber, as well as the use of strong “sea” cords for the cans, is also justified, as well as in those places where you can catch other fish more resilient in catching than the bream – common carp, a large ide.

The feeder itself can have many options. Their effectiveness depends on what kind of bait is used. For example, the traditional bank works well with not too crumbly porridges. It has an open zone on top, and through it porridge, even thick, will be given away well. There are options in the form of a piece of plastic sewer pipe 50, closed on both sides of the coupling. They have holes in the side surface. The diameter of these holes determines how quickly the can will feed. Usually such feeders are more adapted to work with purchased dry baits, since they are more economical to spend. 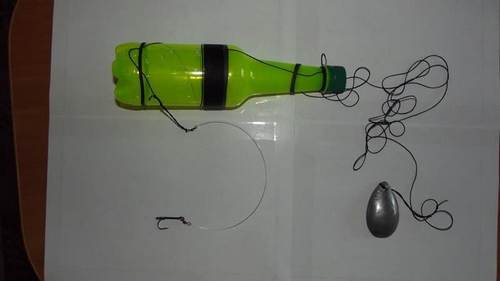 The holes in the feeder should be such that both bait pieces and porridge grains can easily pass through them. It is recommended to make them with a diameter of 8-16 mm, and their total area should be at least one third of the total surface area of ​​the feeder, especially if it is closed.

Bet with hooks made from the same fishing line as the main one. At the rate, two or three loops are made, if they plan to install several leads, and place them at a distance from each other. The first lead is placed at least two feet from the trough, the second one is a meter away from the first, the last one is one meter away from the second one. Leads, if there are several, are made half a meter long. If they put one leash, they make it meter and put it right behind the trough. The fishing line on the leashes depends on the size of the intended prey and usually it is 0.2. Hooks use the same as for catching bream in other ways, given the bait used. It is advisable to use swivels in all connections whenever possible, so that the tackle is not twisted or tangled.

To bite bream was clearly visible, the rod is equipped with a signaling device. Usually it is a straight nod, side nod or bells. Jingle bells are good because they can be heard, even if you begin to nap or in the dark. A nod also shows the nature of the bite itself, which may be important when a naughty bite and allows you to better understand when hooking is required. Both of these alarms can be used – this is how most anglers usually do.

Fishing on the can

Fishing is pretty simple. The can is lowered down from the boat not too fast, so that the equipment with the leashes can straighten up. In still water it is simply lowered down or thrown for a short distance. So that the hooks are not confused, they put the largest bait or the biggest worm on the very last hook, and the closest ones place the nozzles smaller and more compact. After straightening the equipment, the can is lowered to the bottom and waiting for a bite. In catching good assistants will be the echo sounder and depth gauge, which allow you to understand where the fish is and put the can literally under her nose. Catching is carried out until October-September, after which the bream bites become more capricious, and even to the bait, it starts to react not so actively.

Quite a lot means choosing a boat. A good boat such as a badger or golfstream of sufficient carrying capacity, equipped with a modern, echo sounder, with reliable and convenient anchors allows the angler to quickly detect the accumulation of bream, fit in it with all the tackles and luggage, and even fish together. It is also good to have a good car for fishing, with a spacious trunk and all-terrain. Such a “fish car”, although not very suitable for traveling around the city, can become a mobile home for the fisherman, and a means by which you can get to remote places where the fish are not frightened and it is easier to catch.