The pike perch is considered an enviable trophy for fishermen, especially if the caught individual has a decent weight. To please yourself and loved ones with such a catch, you need to know some of the subtleties of capture, an important place among which is occupied by jerk fishing for zander. This method of capture is considered the most successful. 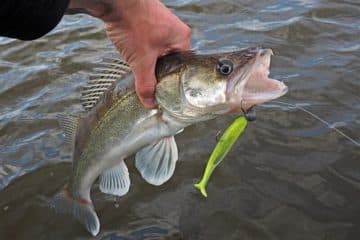 Few of the anglers, beginners or experienced, have not heard about the pike perch, but very few people can describe it. What a pike perch looks like can be accurately told only by those who fished him. Outwardly, it is somewhat similar to a perch, but the colors are different. The pike perch is also a predator, it is distinguished from the perch by two sharp teeth, due to which it received the nickname “fanged”.

Maximum pike perch can reach a weight of 8-12 kg, while it will be quite quirky and cautious. Mostly lives at depth, regardless of the season, it rarely leaves on the shoals and only at night. It feeds in the vicinity of Koryazhnikov, his favorite place is the cluttered bottom, where he waits for his victims.

From nature, pike perch has a great appetite and if it is right to pick up and skillfully present him the bait, then you can get a decent specimen.

Sudak is difficult to catch if you do not know the subtleties of the choice of bait and the correct posting.

Not everyone can be able to boast of a decent perch catch, because a representative of ichthyofauna has its own specific food preferences. He is a predator, but not simple, he will be interested in not every bait.

The most effective way to catch zander is spinning, with the important point being the correct assembly of installation and the use of special baits. Fishing for zander on spinning involves the use of a variety of baits, the best predator responds to:

To offer these baits to the fanged should be special, so as not to frighten, but also to be able to interest. Most often the pike perfectly responds to the jig tackle.

Experienced fishermen recommend fishing for zander with jig tackle without a leash.

This type of spinning fishing came to us from North America, but our fishermen improved it and rebuilt it under our water. Used jig on the river, on lakes, reservoirs quite successfully, the main goal is to catch a predator.

Jigging has a number of advantages:

The main advantage will be the relative cheapness of equipment and baits, which allows fishermen with different incomes to use it.

Before you catch a pike perch on a jig, you need to assemble a snap, while it is worth considering from where the fishing and some features of the reservoir will be carried out.

Spinning form should have a medium-fast action, but the length and test load will differ according to the following criteria:

Choosing a rod usually prefer the test from 7-10 g to 30-40 g, this period will be ideal both for heavy jig, and for lures and a wobbler.

It is not necessary to be conducted on fashion trends and choose cartoons that are more suitable for large loads. For a jig tooling, a conventional inertialess coil with a spool of 2000–3000 is sufficient. It is important that she had a sufficient number of bearings and was in good condition, at the most crucial moment when driving out it will be necessary.

According to the advice of experienced anglers, it is best to use a cord as a base when fishing for zander. This is due to the fact that the braid with a smaller diameter will be able to withstand a greater load, respectively, the equipment will be thinner. The ideal option would be the option of 0.14-0.16 mm thick.

The use of fishing line is also allowed, it will reduce the cost of the collected gear. For fishing it will be enough 0, 26-0,30 mm thick.

Choosing a fishing line or cord for zander fishing should prefer the color options, bright orange, bright green, pink. This will help to see the bite and conduct a notch on time. 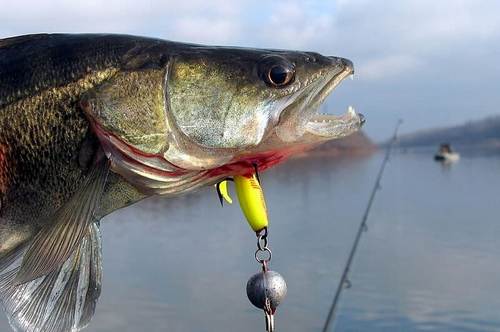 In addition to the main components, special attention is paid to connecting trifles, they must be of excellent quality, because after a notch, perch can put up strong resistance. Fasteners, swivels, clockwork rings must withstand all attempts to escape and help keep the trophy on the hook.

I form a tackle, each fisherman independently determines which hook to put under the selected silicone. Recently, off-hook options are popular, which, when casting, significantly reduce the likelihood of hooks in the snags and grass. On a clean bottom, they also go perfectly, and the ability to replace the load takes them into the lead.

Fans of the classics do not cease to use the jig head, while this installation also enjoys considerable popularity among both experienced fishermen and beginners.

It is worth remembering that pike perch prefers to be placed on the bottom in all weather conditions, therefore weights for the jig must have sufficient weight. Jig in shallow water is also used, here use smaller loads.

In addition to single hooks, silicone is equipped with doubles, to which a removable load-cheburashka of different weight is used as a sinker. Additionally, large sizes of silicone can be equipped with tees, they are attached to the fish through the winding ring from the bottom closer to the tail.

For rigging heavy loads are used, this is done in order to maximize bring the bait to the bottom. Depending on the depths of the reservoir, from 10 g to 28 g jig heads or collapsible cheburashka are used.

The main components of the gear are listed, but this is not enough to catch the perch. Fanged does not respond to a naked hook, to lure him you need to choose the right bait.

The best kind is silicone, there are a lot of jig baits in stores and not everyone knows what to choose. There are jig heads with silicone on the pike, and there is the same option for pikeperch. What’s the Difference? How not to make a mistake for a beginner?

Choose a silicone is simple, you need to know the types and working colors, nothing else. To be exactly with the trophy, the store should pay attention to:

An important point will be the selection of colors, perch is not on every bait wants to pounce. Preference should be given to orange, green, red-orange, yellow colors. An excellent option would be to add glitter to the above shades. Fishing for zander in the spring on a jig provides for the use of just such a color range.

A jig in shallow water at night is made in the summer on silicone with the effect of light accumulation, it will glow in the dark, attracting the attention of a fanged man and luring him out of the shelter.

Pike-perch fishing on a jig in the fall can be successful with muddy silicone, motor oil works fine, muddy white, brown with black and shiny splashes.

Experienced fishermen recommend using cold water from the edible series, which has a special impregnation.

Winter jig on pikeperch is distinguished by bright colors, orange and salad are best suited.

There are many options for collecting equipment for spinning fishing, each angler chooses the most suitable for him. To catch a pike perch, the simplest option is suitable, in which the leash is not used at all:

Choosing hooks pay attention to their sharpness, it must be excellent and with a hook, immediately pierce the fanged lip, otherwise it will go away and hide for a long time.

From wherever a pond is harvested, from the shoreline or from a watercraft, it is important to properly cast and then guide in order to interest the predator. Even with properly selected zander baits, you need to be interested in the game.

First of all, a cast is made, then do the following:

This type of wiring is called stepped and this is the way to get the attention of the pike perch in the best way.

Such movements are carried out, the fishermen are closely watching the tip of the spinning rod, biting can occur at any time. As soon as an attempt was made by the pike perch to try the proposed bait, they made a sharp cutting in order to surely pierce their fanged lips and prevent them from leaving.

The next step will be to play out, if you have a large copy on your hook, then you will need a lot of patience. Experienced anglers say that as soon as the zander is pulled out of the water into the air, its withdrawal is very simple and easy.

In addition to the baits in the fisherman’s arsenal, there must be a catch, it will be much easier to fish large specimens with it.

We catch perch on seasons

The pike perch is caught all year round, but under different weather conditions it will behave in absolutely different ways. The technique of fishing and the lures used depend on his behavior:

Catch a pike perch and when it is frozen, it responds well to sheer trolling such as pilker, in particular to the caster.

Catch perch on a jig is sheer pleasure, the right gear and bait will only contribute to this.